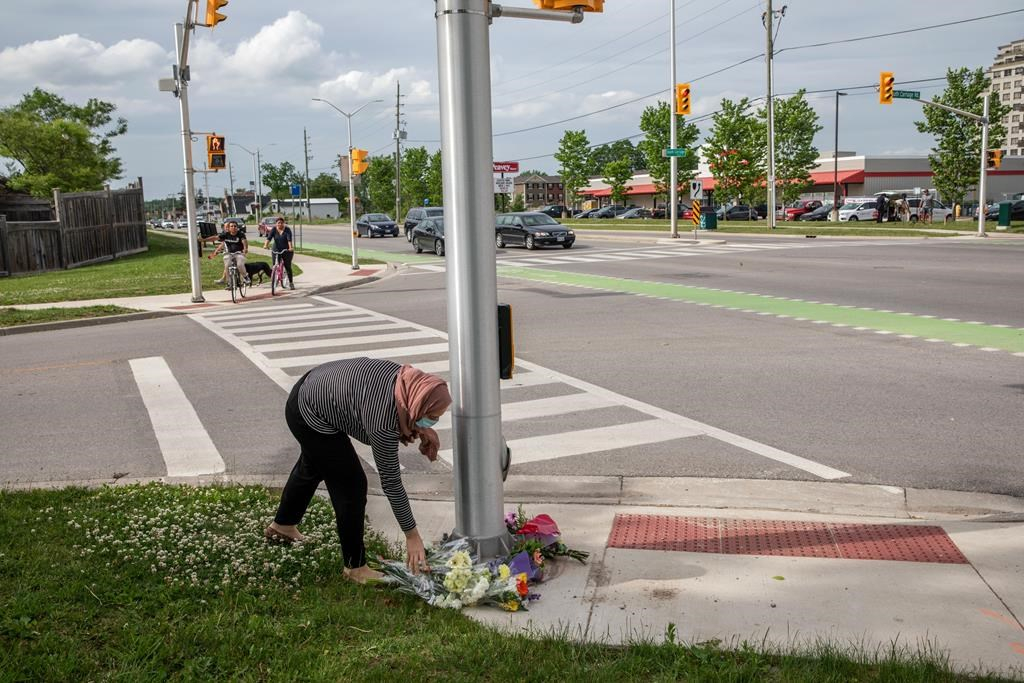 People show up at the location where a family of five was hit by a driver, in London, Ont., Monday, June 7, 2021.Photo by: The Canadian Press/Brett Gundlock
Previous story
Next story

LONDON, Ont. — An attack against a London, Ont., family that left four dead and a child injured was an act of anti-Muslim terrorism, Prime Minister Justin Trudeau told the House of Commons on Tuesday.

Opening with the traditional "As-salamu alaykum," a greeting in Arabic that means "Peace be upon you," Trudeau said the family, like so many others during the pandemic, were out getting fresh air when they were mowed down Sunday evening.

"Their lives were taken in a brutal, cowardly, and brazen act of violence," Trudeau said. "This was a terrorist attack, motivated by hatred, in the heart of one of our communities."

Three generations of the family were killed when a man driving a black Dodge Ram smashed into them on a sidewalk as they waited to cross an intersection in the northwest end of the city.

Relatives have identified the victims as Salman Afzaal, 46, his wife Madiha Salman, 44, daughter Yumna Salman, 15, and her 74-year-old grandmother. The couple's nine-year-old boy, Fayez, remains in hospital with serious injuries.

Trudeau was slated to attend an evening vigil Tuesday at the grief-stricken London Muslim Mosque the family attended. A growing memorial of flowers lay on the steps of the main entrance. A single police vehicle sat at the back of the parking lot keeping watch, while a technician on a ladder repaired a security camera attached to the building.

Investigators said the driver intentionally targeted the victims because of their Muslim faith. London's mayor called it an act of "mass murder."

Police arrested Nathaniel Veltman, 20, of London, at a mall about seven kilometres from the carnage shortly after the driver sped off from the scene. He is charged with four counts of first-degree murder and one of attempted murder.

Police were inside the suspect's downtown apartment on Tuesday.

Sana Yasir, a friend of the family who lives down the street, confirmed she had been in touch with Afzaal's brother and sister-in-law and released a statement on their behalf.

Vigil to be held in London, Ont. mosque for family deliberately rammed by driver in an attack which left four dead. #hatecrime #ontario #Islamophobia

"We need to understand that the destruction of a family in the brutal and horrific manner like this is something we must all stand against," the statement reads. "We need to stand against hate and Islamophobia and raise awareness in our communities and throughout all political spectrum."

Yasir said the family was well known within the local Pakistani-Muslim community.

"They were the most loving, caring and genuine family and would always greet you with a smile," she said.

Two online fundraisers for the surviving boy had taken in about $775,000 as of Tuesday morning.

Dozens of people went out to the scene of the attack on Monday night to pay tribute. They cried, hugged and placed flowers around a light pole and a nearby tree, a metre from where the speeding truck hopped the curb.

Rauf Ahmad and three of his friends watched the growing tribute on the corner. The group said they all had relatives killed in Pakistan over their Muslim faith.

“I didn’t think there was racism in Canada and I felt very safe when I came here two years ago, but I do not feel safe now,” Ahmad said. “Humanity is first, we should not care about whether someone is a Muslim, a Jew or a Christian.”

Politicians across Canada and beyond have also denounced the attack, with many calling it an act of terror.

The country's foreign affairs minister, Shah Mahmood Qureshi, expressed sympathy for the relatives of the victims and hope for the child's recovery.

"We must name Islamophobia and white supremacy when they occur, and take real steps to end the normalization of both in Canadian culture," Davita Guslits, a member of the group in London, said in a statement. "Attacks like these do not occur in a vacuum."

Ontario Premier Doug Ford similarly said the "horrific and deliberate attack on a Muslim family" had left the province in mourning. Ford, who planned to join the vigil, said all government events had been cancelled for the day.

This report by The Canadian Press was first published June 8, 2021.

While I think he is probably

While I think he is probably correct, the practice of having our most senior politicians making public judgments that belong in the hands of prosecutors has the potential to undermine respect for law. Trudeau, like his Conservative "friends", have been doing this now for several years. It should stop. Justice cannot become a political debate, and politicians should not pre judge criminality.