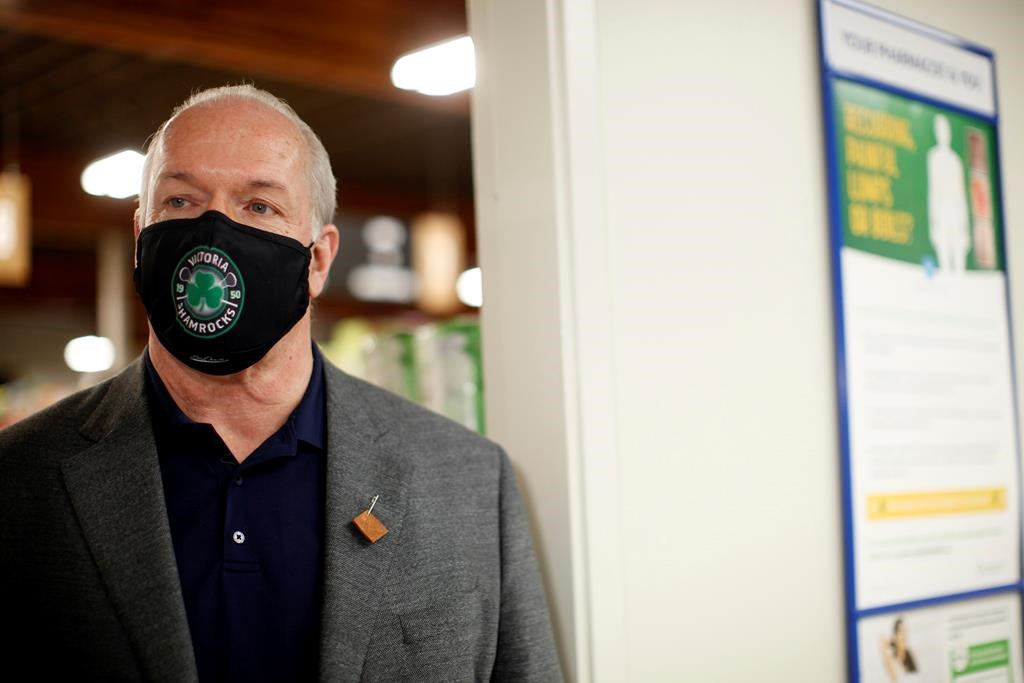 Premier John Horgan arrives to receive a dose of the AstraZeneca COVID-19 vaccine at the pharmacy in James Bay Thrifty's Foods in Victoria, B.C., on Friday, April 16, 2021. Photo by: The Canadian Press/Chad Hipolito
Previous story
Next story

VICTORIA — British Columbia has approved the request of three First Nations that want old-growth logging deferred for two years in part of their territories, including at the site of ongoing protests and arrests.

Premier John John Horgan said Wednesday the province has taken a transformative step in forestry and respecting the nations' land-management rights is part of its commitment to align policies with the United Nations Declaration on the Rights of Indigenous Peoples.

The move is also in keeping with the government's adoption last September of recommendations of an independent panel, starting with the deferral of nearly 200,000 hectares of old-growth forests.

Hereditary and elected chiefs of the Huu-ay-aht, Ditidaht and Pacheedaht First Nations on southwestern Vancouver Island issued a declaration Monday calling for old-growth logging to be temporarily deferred in Fairy Creek near Port Renfrew as well as the central Walbran area. The deferral in the two areas involves about 2,000 hectares of old-growth forest.

The chiefs said in a joint statement that they are humbled by the broad base of support they have received for the declaration from across B.C. and Canada.

It said they welcome the decision by the provincial government and will monitor forestry activities in the areas to ensure old-growth timber is not cut.

"While this essential work is being carried out, we expect everyone to allow forestry operations approved by our nations and the government of British Columbia in other parts of our territories to continue without interruption. Please respect that our citizens have a constitutionally protected right to benefit economically from our lands, waters, and resources."

A protest group dubbed the Rainforest Flying Squad said members will remain in the Fairy Creek area because large-scale logging could still occur in old-growth forest directly adjacent to Fairy Creek and in parts of the central Walbran not included in the deferral.

Saul Arbess, a member of the group, said in a statement that while the government's announcement is a positive step, "it falls short of the deferrals required to pause logging in all the critically endangered areas currently being defended, for generations to come."

B.C. Premier John Horgan has approved a First Nations request to defer old-growth logging in the #FairyCreek area for so long. #oldgrowth #bcpoli

The group is calling for the protection of about 4,600 hectares in both areas.

Horgan said he's hopeful that protesters at Fairy Creek will understand the process involving an industry that has long been the foundation of B.C.'s economy "is not one that can happen overnight."

The province will act as quickly as it can on deferral requests from other First Nations, Horgan said.

There's been a demand for change in the forestry sector since the 1970s but that will involve widespread consultations that include First Nations, he said.

"I think this is the way forward as to the Pacheedaht, Huu-ay-aht and Ditidaht."

Adam Olsen, a Green party member of the legislature from Vancouver Island, said approving the deferral is only the first step in a long process.

"For decades, Indigenous people have watched natural resources trucked out of their territory to the economic benefit of industry and the provincial government," said Olsen, a member of the Tsartlip First Nation.

"The B.C. NDP government has a responsibility to provide the resources necessary, with no strings attached, to these Nations to develop this comprehensive integrated resource management plan," he said in a statement.

RCMP said Tuesday that 194 arrests have been made at Fairy Creek since police began enforcing a court injunction that would allow a logging firm to resume its work.

Teal-Jones said Monday that it would abide by the nations' declaration and would engage with them as they developed their forest management plans.

The impact on jobs from the current deferral is not expected to be significant because the three First Nations will continue harvesting in parts of their territory, Horgan said.

"I think we've done a pretty good job of making sure that the tenure holders understand the expectations from people who own the resources, that being the people of British Columbia, and also understanding that workers can continue to support their families wherever they live."

Why the BC NDP's old-growth preservation efforts fall short