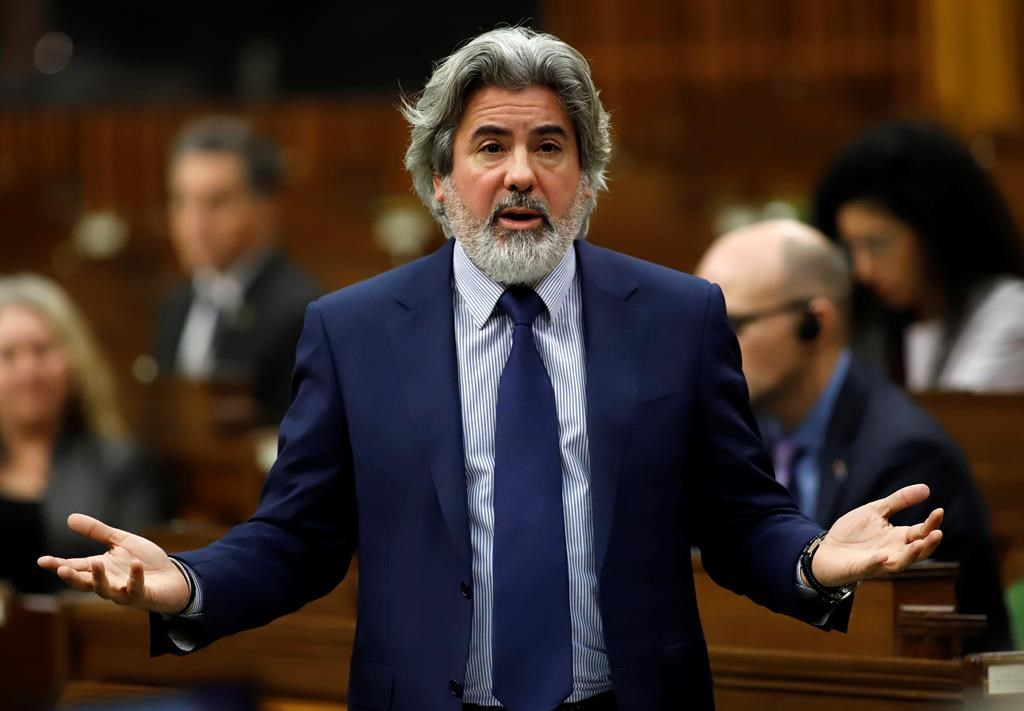 Government House leader Pablo Rodriguez says the Conservatives are blocking the passage of "progressive legislation" put forward by the minority Liberals before MPs wrap up for the summer.

In a news conference Thursday, Rodriguez said it's crucial to put politics aside and move forward to debate and vote on key legislation like Bill C-6, which would ban LGBTQ conversion therapy.

"Canadians are counting on us to do the right thing to put politics aside and work together to vote on some key bills," Rodriguez said. "They want collaboration, not partisan gains."

The House of Commons has eight days left in the sitting calendar for MPs to debate and vote on key bills that have not yet made it to the Senate, such as one that would set legally binding targets for reducing greenhouse gas emissions.

With an election a possibility before Parliament resumes sitting in the fall, any bills not passed by the House of Commons and Senate in the remaining time available would die.

"Unfortunately, there's one party in the House that is standing in the way of progress, one party that is using its minority to block the will of the majority in the House," Rodriguez said. "That is Erin O'Toole's Conservatives."

According to Rodriguez, the Tories have been "obstructing" the work of the House of Commons and are using "complex procedural tricks to get their way." He said the party is doing this not because they want to improve the bills, but to "kill those bills."

In a separate news conference, Conservative House leader Gérard Deltell disputed Rodriguez's accusations and said when talking about Parliament work, the onus is on the government.

He said the government employed the "strongest" tool against the work in Parliament by proroguing the government in August in the midst of the WE Charity scandal. He also accused the Liberals of using the filibustering process "many, many times in many committees."

Deltell cited the number of hours the Liberals allegedly spent filibustering various committees including those focused on ethics and defence.

"The Liberal spent 167 hours of filibustering time in those committees," he said. "Without a shadow of a doubt, the Liberals are the kings of the (filibuster)."

The Opposition House leader said his party is asking is to have the right balance between work in Parliament, in the House of Commons and in committees.

"At the end of the day," Deltell said, "we want to be sure that this house will have time for work in the House, and also time in committees."

Rodriguez said the Conservatives have obstructed legislation such as the COVID-19 relief bill and the legislation to help Elections Canada run an election during the pandemic.

He added the party keeps employing the same tactics to continue putting roadblocks on three important bills: Bill C-6, which would ban conversion therapy and is currently at third reading; Bill C-10. which would amend the Broadcasting Act to make streaming services adhere to Canadian content regulation; and Bill C-12, which would enact climate accountability legislation.

"We're bringing forward responsible legislation to protect people," Rodriguez says on the bill that would ban conversion therapy. "The Conservatives refuse to let the bill come to a vote during Pride month, no less."

On the conversion therapy bill, the Conservatives argue that it is too broad and would prevent people from having conversations with faith leaders about their sexuality, while on C-10, the Tories say it would limit free speech online. As for C-12, they say "climate activists" were on a panel that advised the government on how to achieve net-zero emissions by 2050.

Rodriguez also accused some members of the Conservative Party of "refusing to admit" that climate change is real; hence, wanting the net-zero bill to die.

He said he will use every parliamentary tool at his disposal to prevent the Conservatives from blocking the bills. He also called on the Bloc Québécois, the NDP and the Greens to "overcome" the Conservatives.

In the House Thursday, while discussing motions to extend sitting hours, the Conservatives asked the House to adjourn for the day.

The motion would extend sitting hours until midnight on Mondays and Wednesdays and until 4:30 on Fridays, starting this Friday and ending June 23 when the House is scheduled to break for the summer.

Rodriguez called the move by the Conservatives "outrageous."

"We are trying to extend the hours in the House to work more and adopt more bills. But the Conservatives are obstructing this by asking the House to adjourn," he wrote in a tweet. "If they don’t want to get to work, fine. But let us do our work and pass important bills for Canadians."

The motion to adjourn the House for the day was overthrown after not receiving enough votes.