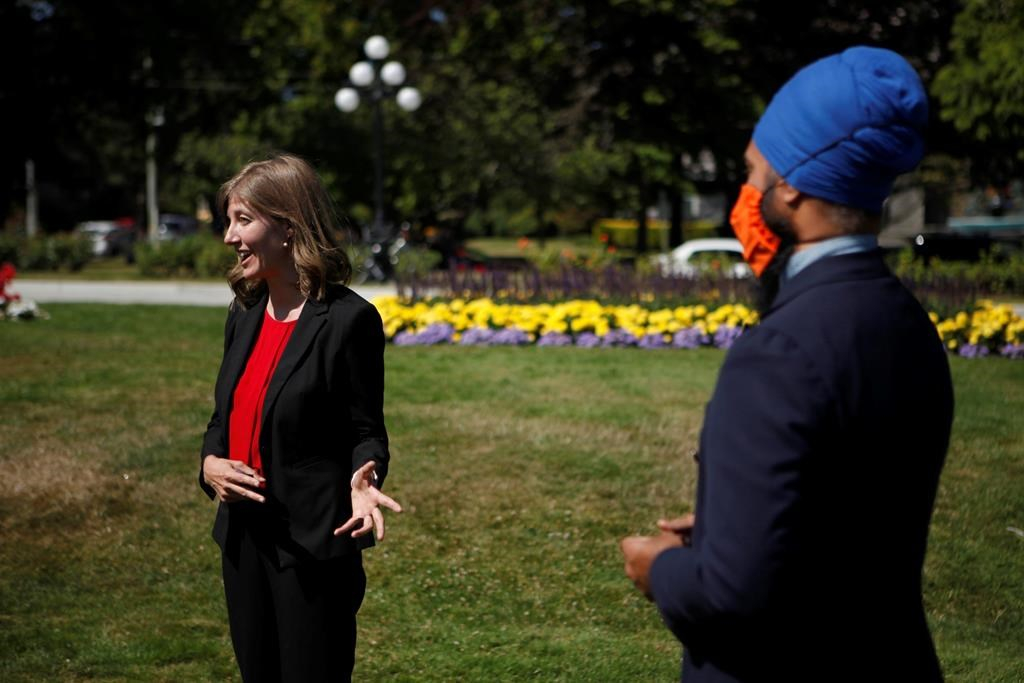 NDP Leader Jagmeet Singh is joined by NDP MP Laurel Collins speak during a press conference on the front lawn of the B.C. Legislature in Victoria, B.C., on Friday August 14, 2020. Photo by: The Canadian Press/Chad Hipolito
Previous story
Next story

OTTAWA — NDP environment critic Laurel Collins says her party will help the Liberals get the government's climate accountability bill to the Senate as soon as possible, even though the bill isn't as good as she thinks it could be.

That would mean Canada captures any emissions still produced using nature or technology, a critical requirement to the world's attempt to slow global warming.

Environment Minister Jonathan Wilkinson introduced the bill in November and is now seeking help from the NDP and Bloc Québécois to speed its passage through the House of Commons.

Wilkinson says the Conservatives are purposely trying to drag out the clause-by-clause review at the House environment committee, which allows MPs to vote on proposed amendments.

But if the bill doesn't get to the Senate this week, it likely won't have time to pass there before Parliament rises for the summer, and with an election a distinct possibility before it resumes in the fall, the bill would then die.

"Given Conservative procedural tactics, I am asking for your support to use the parliamentary tools available to ensure this bill advances to the Senate of Canada for consideration as soon as possible," Wilkinson said in a letter to NDP and Bloc leaders Tuesday.

The bill is 10 pages long with about four dozen clauses and Wilkinson notes 12 hours of review has only moved the bill half way through clause-by-clause review. Amendments have been proposed by all parties which is slowing the process, but Wilkinson says the Conservatives are purposely lengthening the discussion of each one to slow everything down.

"It is clear the Conservatives will do whatever it takes to prevent its consideration by the Senate of Canada before Parliament rises," he said.

Conservative environment critic Dan Albas said the Liberals are rushing the bill through so fast a majority of statements submitted to the committee by Canadians didn't arrive until after the deadline for submitting amendments.

"This disrespectful action by the Liberal government and the NDP shows that they care more about politics than listening to Canadians," Albas said.

He also said the "Liberal government and their NDP allies made a deal and are refusing to even debate or engage with any ideas from other opposition parties."

All amendments proposed by the Bloc and Green parties were defeated and the Bloc has no plans to help Wilkinson out.

"The Bloc does not intend in any way to hinder, slow down or interfere with the proper functioning of the committee currently studying Bill C-12," said party spokesman Julien Coulombe-Bonnafous in French.

Collins agrees the Conservatives are trying to run out the clock on the bill, but said the Liberals put themselves in the position by not introducing the promised bill until late November, and not bringing it up for meaningful debate until April.

"We are willing to use any of the parliamentary tools available to us," she said in an interview with The Canadian Press.

"It's so vitally important that Canada has climate accountability legislation."

Such bills in the United Kingdom and New Zealand helped them meet all the targets they have set. Canada, said Collins, has never met any of its climate targets, and its emissions have increased since the 2015 Paris climate accord.

Environment groups are also urging all parties to get the bill passed.

Andrew Gage, a staff lawyer at West Coast environmental law, said the bill would be stronger if it showed plans that actually achieved its emissions targets, and had an advisory body reporting to Parliament instead of the minister.

But he said the bill as it now stands, with the agreed amendments, is better than anything Canada has ever had.