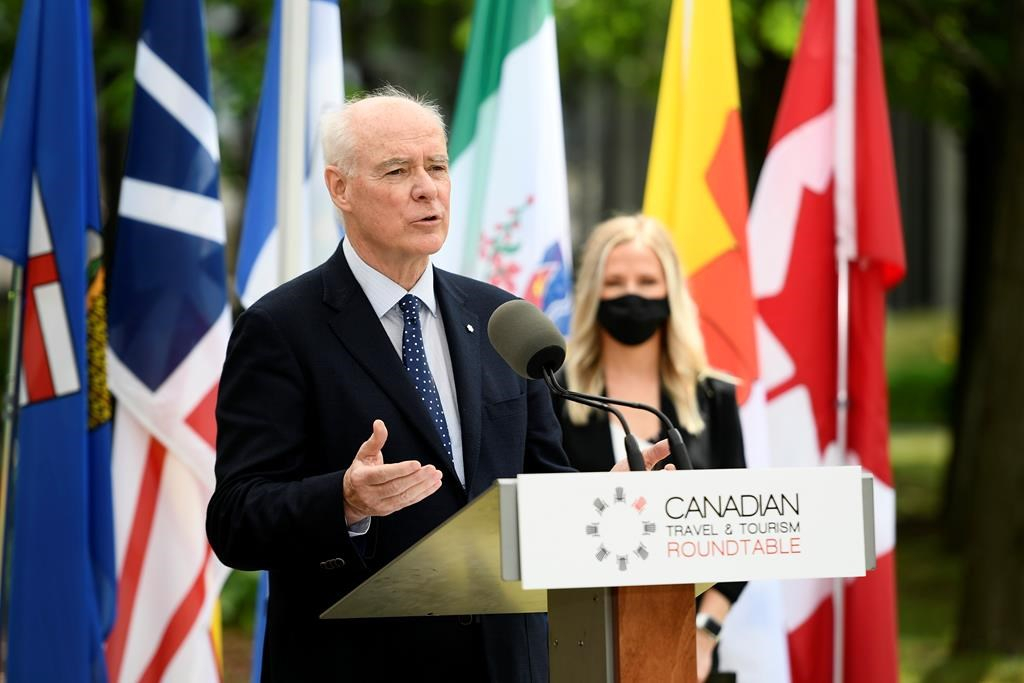 Perrin Beatty speaks during a news conference held by the Canadian Travel and Tourism Roundtable, at the Ottawa Airport in Ottawa, on June 14, 2021. Photo by The Canadian Press/Justin Tang
Previous story
Next story

Business leaders are calling on Ottawa to immediately lay out a comprehensive plan to reopen the economy and international borders along with a vaccine certification process as they struggle to prepare for a summer season hanging in flux.

At a news conference Monday, a Canadian travel and tourism roundtable said the federal government must heed advice from its expert advisory panel last month and allow fully vaccinated foreigners into the country.

Prime Minister Justin Trudeau said Sunday he spoke with U.S. President Joe Biden at the G7 summit about easing border restrictions, but gave no hints that a timeline or other specifics have been settled on.

Perrin Beatty, chief executive of the Canadian Chamber of Commerce, called Canada a G7 "outlier" in failing to provide a fully fledged reopening plan that includes vaccination rates and other criteria.

"We are well behind other countries. The great irony here is that Canada is a world leader when it comes to first shots, first vaccinations. And yet we're a world laggard when it comes to having a plan for reopening," Beatty told reporters.

He cited a "systematic plan" to unlock borders in the European Union and projections for a major travel rebound within the United States after the Transportation Safety Authority reported record air passenger numbers over Memorial Day weekend late last month.

"At some point government has to decide whether being vaccinated is meaningful," Beatty said. "We need a plan. We need it now. And everybody needs to know what it is."

The tourism and travel sectors have lost billions over the past 15 months amid ongoing travel advisories and border closures due to the pandemic.

The U.S.-Canada border closure, in place since March 20 and renewed monthly, is currently set to expire next Monday with no word yet on an extension, leaving the travel and tourism sectors uncertain how to prepare for the subsequent weeks.

Beth Potter, CEO of the Tourism Industry Association of Canada, called for federal leadership on interprovincial travel as stakeholders stressed clarity and coherence.

“In the absence of a nationwide plan we are seeing a patchwork of policies roll out initially that creates confusion for travellers," she said. Potter called the result of 13 different plans — one for each province and territory — "unnecessary and cumbersome."

"Tonight we're going to see the (Montreal) Canadiens play in Vegas in front of 30,000 fans," she said. "If there can be a plan for our NHL teams, why can't there be a plan for the rest of Canadians?"

The government took a cautious first step last week when it announced that Canadian citizens and permanent residents who have received two vaccine doses and who test negative for COVID-19 will likely be exempt from two weeks' self-isolation, including hotel quarantines, starting early next month.

Several key details remain unknown, including precise dates and whether children under 12 years old travelling with their parents will also be exempt, given their ineligibility for vaccination.

The government said last month it is working with G7 countries and the European Union to integrate vaccine certification into international travel in the months ahead.

Canada could lose up to three-quarters of its small and medium-sized tourism businesses in the absence of a summer season, Potter said.

About 64.5 per cent of all Canadians have received one COVID-19 vaccine dose, while about 12.5 per are fully vaccinated, according to one vaccine tracker.

More than 43 per cent of all Americans have received one dose, while roughly 52 per cent are fully vaccinated, government data shows.

The airline industry has been among the hardest hit, with Air Canada alone losing roughly $5.3 billion in 2020 and the first quarter of 2021. But sympathy for management may be in short supply after they received $10 million in bonuses following more than 20,000 employee layoffs and hundreds of millions in federal wage subsidies for the company — and shortly before an aid package worth up to $5.9 billion announced in April.

Air Canada said last week its handful of senior executives had opted to return their "pandemic mitigation bonus" totalling nearly $2 million after public backlash and chiding from Finance Minister Chrystia Freeland. But the remaining $8 million spread among some 900 managers is staying put.

NDP finance critic Peter Julian brought forward a motion in the House of Commons on Monday calling on the government to require that Air Canada fully reimburse the $10 million and "cancel all approved bonuses for senior executives." Several Liberal MPs opposed the motion, which needed unanimous consent to pass.

This report by The Canadian Press was first published June 14, 2021.