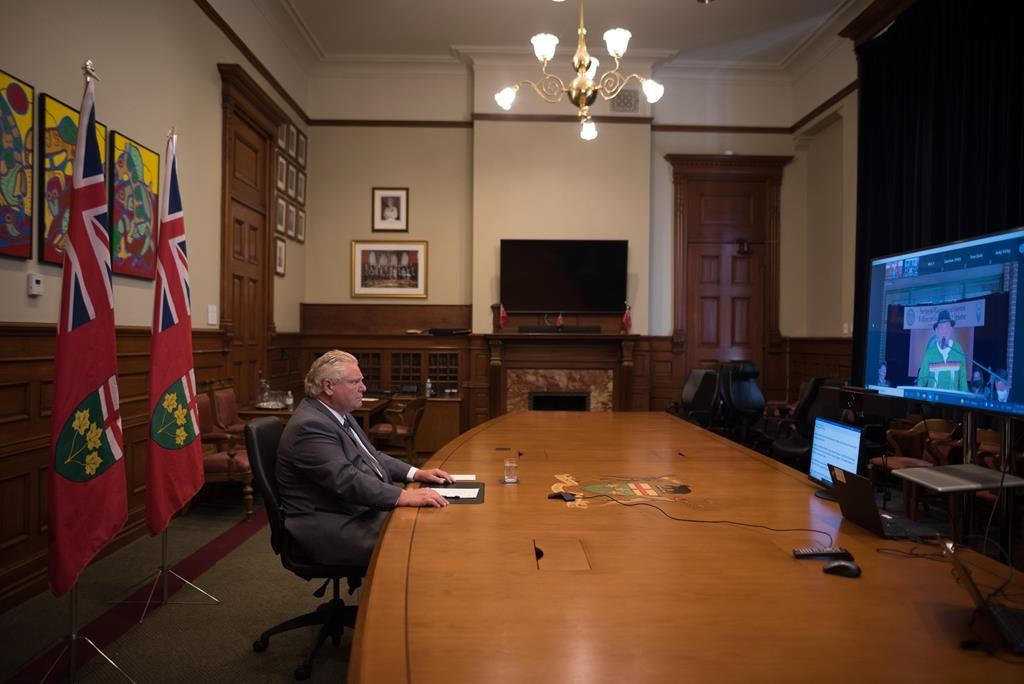 Ontario Premier Doug Ford said his government had felt the need to act on the issue. Photo by Canadian Press
Previous story
Next story

Ontario is committing $10 million over three years to identify, investigate and commemorate burial sites on the grounds of former residential schools in the province.

The funds will also go toward culturally appropriate supports for school survivors, their families and communities, and the entire process will be Indigenous-led.

“Indigenous communities have waited too long for action to bring justice to the little ones who didn't make it home,” Indigenous Affairs Minister Greg Rickford said Tuesday from Kenora, Ont.

“Initial site identification will be the first step in what is anticipated to be a much more extensive process, and we're committed to seeing this work through to completion in collaboration with our Indigenous partners.”

Residential school survivors, elders, community members and leaders will be involved and the process will be guided by the wishes of families and communities, Rickford said.

Ontario's announcement comes a few weeks after the discovery of an unmarked burial site believed to contain the remains of 215 children at a former residential school in Kamloops, B.C.

The Tk'emlups te Secwepemc First Nation said it used the services of a ground-penetrating radar specialist to confirm the preliminary findings last month. That discovery prompted calls for funding to support similar work across the country.

Ogichidaa Francis Kavanaugh of Grand Council Treaty #3 in Kenora said the news from Kamloops has affected First Nations people across the country.

“While we already knew this occurred in Canada, it is incredibly painful to relive, especially for survivors and our families who have bravely been telling us the truth for decades,” he said.

Kavanaugh also called for searches to extend beyond residential school grounds, based on reports from survivors who recalled children being buried off site or cremated.

“Indigenous communities have waited too long for action to bring justice to the little ones who didn't make it home,” says Ontario's Indigenous Affairs Minister Greg Rickford. #ResidentialSchools

“It is important that our efforts are done in a proper way to respect the spirits of the children,” he said.

Rickford confirmed the investigation process, driven by survivors' knowledge, could extend beyond the 18 known residential school sites in Ontario.

“What we're providing is an opportunity ... for that information to come forward,” he said.

More funding might be allocated after the immediate focus on searches and support for affected individuals, Rickford said, adding that the province is also prepared to call on the federal government for support.

Ontario Premier Doug Ford said his government had felt the need to act on the issue.

“There is painful but necessary work ahead and we must confront what happened for reconciliation to be achieved,” Ford said.

The National Truth and Reconciliation Commission identified 12 locations of unmarked burial sites in Ontario. The province said there are likely more.

The final report from that commission detailed mistreatment at Canada's residential schools, including emotional, physical and sexual abuse, and more than 4,000 deaths at the institutions.

It reported known deaths of 426 children who attended schools in Ontario and an unknown number of children still missing.

Ontario said its process for investigating residential school sites will involve archeologists, forensic specialists, historians and other experts. The province's chief coroner and chief forensic pathologist will also be engaged.

The province will also fund culturally appropriate and trauma-informed mental health supports for residential school survivors, their families and communities.

Six Nations of the Grand River Elected Chief Mark Hill called for in-depth investigations into the deaths of children whose remains are found.

“Six Nations is encouraged in the hope that we will find all of our missing children and bring to light what exactly happened to each of them,” said Hill, who spoke Tuesday from outside the Mohawk Institute in Brantford, Ont., accompanied by survivors of that school.

Ontario Regional Chief RoseAnne Archibald said she was grateful the province was answering the calls of leaders who wanted the work to happen.

“Our little ones need to be found, named, and where possible, returned to their families and communities,” she said in a statement. “Memorial sites must go up across Ontario to remind us that we can never let this happen to our children again, ever.”

Indigenous NDP legislator Sol Mamakwa said $10 million was a “drop in the bucket” compared to the funds required to complete exhaustive searches of at least 18 sites. Based on his own consultations with experts, he said the work would likely take closer to a decade and cost far more.

“We welcome it, but I hope it’s just only the beginning,” Mamakwa said.

Alberta Premier Jason Kenney said Tuesday that details of a “multimillion-dollar package” of support for locating burial sites at residential schools in that province would be coming in the next few days. He said Alberta will offer grants to Indigenous organizations, who can decide how to approach the work.

Most Canadians blame churches for misery caused by residential schools