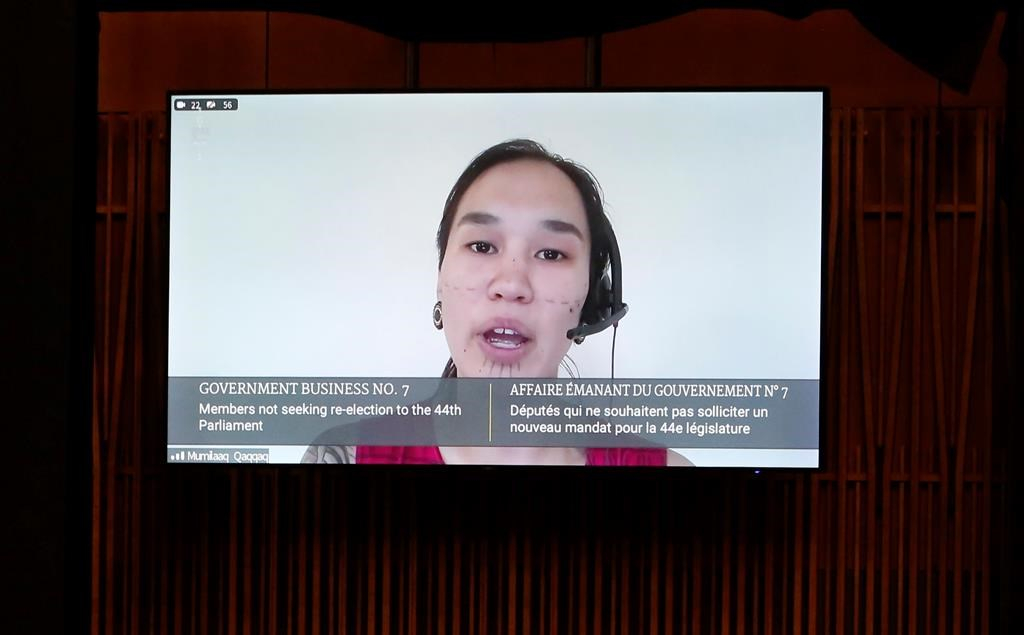 NDP MP Mumilaaq Qaqqaq delivers a farewell speech in the House of Commons on Parliament Hill in Ottawa on Tuesday, June 15, 2021. Photo by The Canadian Press/Patrick Doyle
Previous story
Next story

Canada was excoriated as a racist, hypocritical failure Tuesday as MPs who don't intend to seek re-election said their official farewells to Parliament.

Mumilaaq Qaqqaq, the New Democrat MP for Nunavut, used the opportunity to blast Canada as a country built on the oppression of Indigenous People and whose history is "stained with blood."

"People like me don't belong here in the federal institution," she told the House of Commons.

"The reality is that this institution and the country has been created off the backs, trauma and displacement of Indigenous People."

But he spread his condemnation more broadly. He argued that the notion of Canada as a progressive, environmentally friendly, egalitarian and democratic country is false on all fronts, citing examples aimed at proving the country's essential hypocrisy.

Marcil asserted that Canada "stole" the 1995 referendum on Quebec independence and stole its symbols — the maple leaf and the beaver — from Quebec.

He maintained Canada has only a "fragile" national identity, in which Albertans are more proud to be Albertans and Quebecers more proud to be Quebecers than they are to be Canadians. The only distinguishing cultural feature, he added, is hockey — and even then, he noted, the Toronto Maple Leafs can't win.

The speeches from Qaqqaq and Marcil were in marked contrast to those from 11 other departing MPs, most of whom spoke glowingly about the honour of serving Canada.

Qaqqaq found nothing honourable about her experience on Parliament Hill since she was first elected in 2019.

"Every time I walk onto House of Commons grounds, speak in these chambers, I am reminded every step of the way I don't belong here," she said.

"I have never felt safe or protected in my position, especially within the House of Commons."

Qaqqaq said security guards on the Hill have jogged after her down hallways, "nearly put their hands on me and racial profiled me."

The experience has taught her "as a brown woman, do not move too quickly or suddenly, do not raise your voice, do not make a scene, maintain eye contact and don't hide your hands."

Qaqqaq said she has heard many "pretty words" about reconciliation, diversity and inclusion, but they have proven to be largely empty.

Liberal MP Navdeep Bains, who stepped down as a cabinet minister earlier this year after deciding not to seek re-election, told the Commons he's had similar run-ins with racial prejudice.

He recounted how a "very senior" Liberal advised him not to put his photo in his brochures during his first campaign in Mississauga-Malton in 2004 — advice he did not take.

"I wasn't going to hide my identity or conceal who I was," said Bains, a practising Sikh who wears a turban.

The recent discovery of what are believed to be the remains of 215 children at a former residential school in British Columbia and the killing of four members of a Muslim family in London, Ont., are stark reminders of the "long journey" ahead to achieve true equality and inclusiveness, he said.

"Politics has taught me that progress is not linear," he said. "It happens when enough good people fight long enough and hard enough to make things right."

Conservative MP David Sweet revealed during his farewell speech that he's decided not to run again in Ontario's Flamborough-Glanbrook riding because he's been grappling with mental health challenges.

He attributed those challenges in part to having spent 15 years as a member of the Commons human rights committee, listening to "the worst stories of human suffering" as well as to the "draconian lockdowns" imposed during the COVID-19 pandemic.

"All of us need to be conscious of what our limit is and assure we get relief and help when needed well before it becomes crippling. This is what I'm doing," Sweet said, urging others to do the same.

"You need not feel any shame. We all need help sometimes."

All parties agreed to give MPs who don't plan to run again the chance to give swan song speeches during the special session Tuesday night — even though it is not certain there will be an election any time soon.

All parties profess not to want an election while the country is still grappling with the pandemic, but there's a widespread expectation that Prime Minister Justin Trudeau will pull the plug on his minority Liberal government this summer.

New Democrat MP Jack Harris said giving a farewell speech seemed "a little funny" under the circumstances, referring to his own as an "in case speech" instead.

He also said it was "unfortunate" that he had to give the speech "from 1,500 miles away through Zoom" from his home in St. John's to people he hasn't really had the chance to get to know due to the pandemic.