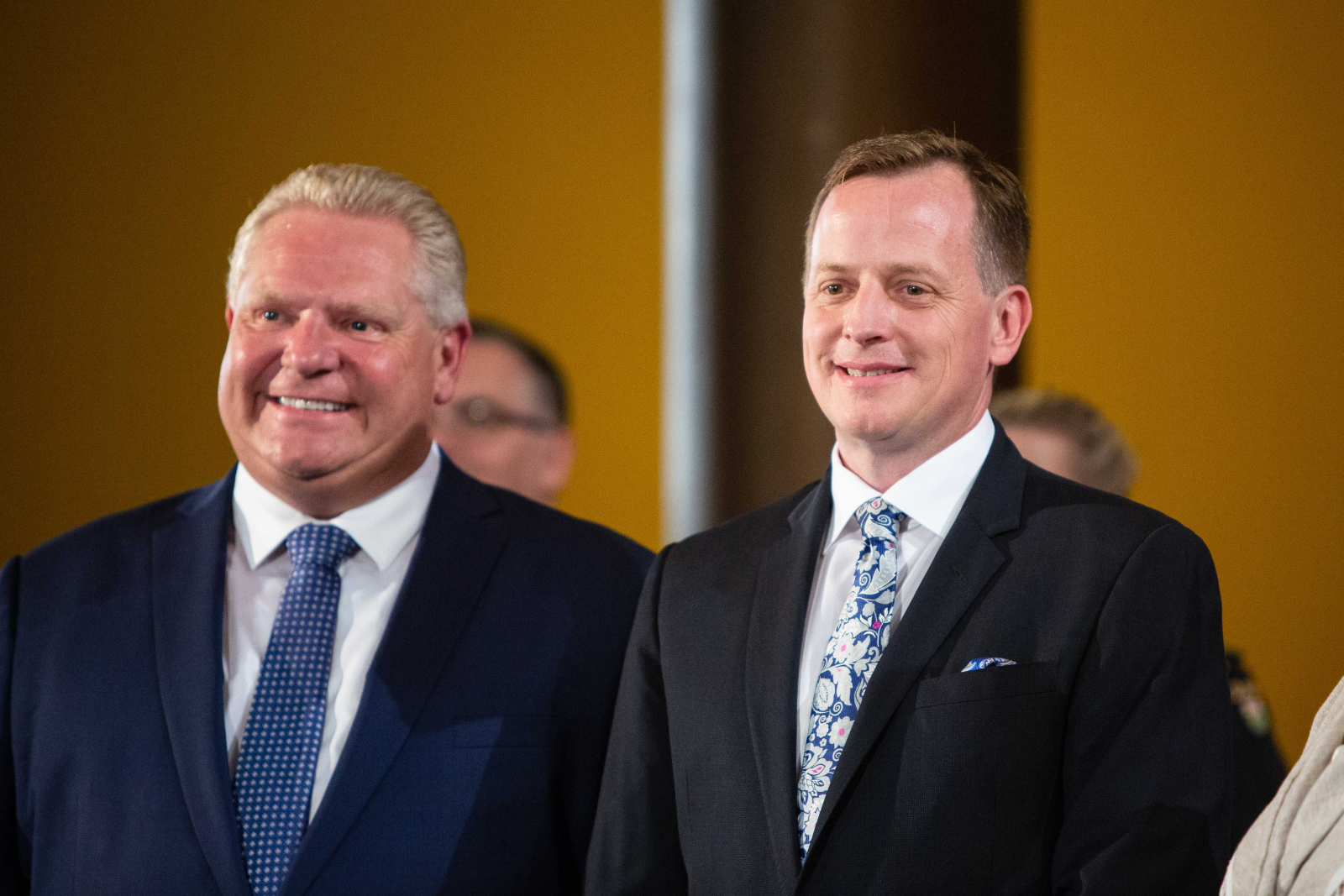 Premier Doug Ford, left, and MPP Jeff Yurek, right, in 2018. Yurek was shuffled out of his role as environment minister Friday. File photo by Alex Tétreault
Previous story
Next story

Premier Doug Ford dumped his environment and natural resources ministers in a massive cabinet shuffle Friday, a year before the next provincial election.

Former environment minister Jeff Yurek, who had been responsible for Ontario’s much-criticized climate plan since taking over the portfolio two years ago, will be replaced by backbench MPP David Piccini.

Former natural resources and forestry minister John Yakabuski, who had led Ontario’s push to double wood production by 2030, is also out of caucus.

Yakabuski will be replaced by Greg Rickford, who had been serving as minister of energy, northern development, mines and Indigenous affairs. Rickford has largely been out of the spotlight since he came under fire in 2019 for citing a climate change denial blog in defence of scrapping green energy projects.

Now, Rickford will assume a merged role as minister of northern development, mines, natural resources and forestry, and will remain as minister of Indigenous affairs. In a press release, the province said his new ministry will focus on “development potential and sustainability in the North.”

Taking over as energy minister is Todd Smith, who had been minister of children, community and social services. Former associate energy minister Bill Walker is also out of caucus.

“Our renewed team is well-positioned to deliver on the priorities that matter to Ontarians, including getting more people back to work, making life more affordable, supporting businesses and job creators, and building transit infrastructure,” Ford said in a statement.

The work of the Crown continues.

Today I was pleased to preside over changes to the Executive Council in Ontario’s first virtual cabinet shuffle. pic.twitter.com/XEcw9RUWr9

Last month, the Toronto Star reported the premier was frustrated with Yurek, Yakabuski, Walker and a few other ministers who had been resistant to COVID-19 lockdown measures. All continue to hold seats in relatively safe PC ridings.

Piccini, the MPP for the southern Ontario riding of Northumberland—Peterborough South, will be the Progressive Conservatives’ third environment minister since forming government in 2018.

A cabinet position is a big step up for Piccini, who toppled a Liberal incumbent to win his seat in 2018 and has since held the role of parliamentary assistant to the minister of colleges and universities. The new minister has fielded questions about the Tories’ planned Greenbelt expansion and attended an announcement about provincial conservation funding alongside Yurek, but hasn’t been heavily involved in the environment file so far.

Premier Doug Ford dumped his environment and natural resources ministers in a massive cabinet shuffle Friday, a year before the next provincial election. #onpoli

“Now more than ever, it’s important that government and our partners step up our conservation efforts, given the worsening impacts of climate change,” Piccini said in March.

Piccini started his career in Ottawa, working as an international market analyst at Agriculture Canada and a policy adviser at Service Canada. He also worked for former federal Conservative international trade minister Ed Fast and at organizations related to health care.

Honoured to be sworn in today as Ontario’s Minister of Environment, Conservation & Parks! 🌲

Looking forward to serving the people of this province in this exciting new role & to protecting our environment for generations to come!

Thank you @fordnation for this honour! pic.twitter.com/Pj4ME1NwGb

Ford’s original environment minister, Rod Phillips — who later took on the finance portfolio — resigned from cabinet in December after taking a vacation to the tropical island of St. Bart’s amid COVID-19. But on Friday, Phillips returned to cabinet as minister of long-term care, taking over from the embattled Merrilee Fullerton.

Opposition critics said the shuffle wasn’t enough to redeem the Ford government, whose approval ratings have plummeted this year amid the third wave of COVID-19.

Ontario NDP Deputy Leader Sarah Singh said the shuffle was an admission that the government had “failed people during the pandemic.”

“Leadership starts from the top, and the only way to have a real reset is for Doug Ford to admit what everybody knows — he's in over his head and it's time for him to go,” Blais said in a statement.

All in all, 15 members of the PC caucus received new roles and five of Ford’s cabinet ministers were shuffled out. The new cabinet was sworn in virtually Friday afternoon.

This story was updated to include more about new Environment Minister David Piccini and reaction from opposition critics.