Movies: Another Quiet Place, Kevin Hart not joking as a father, and Pixar’s latest 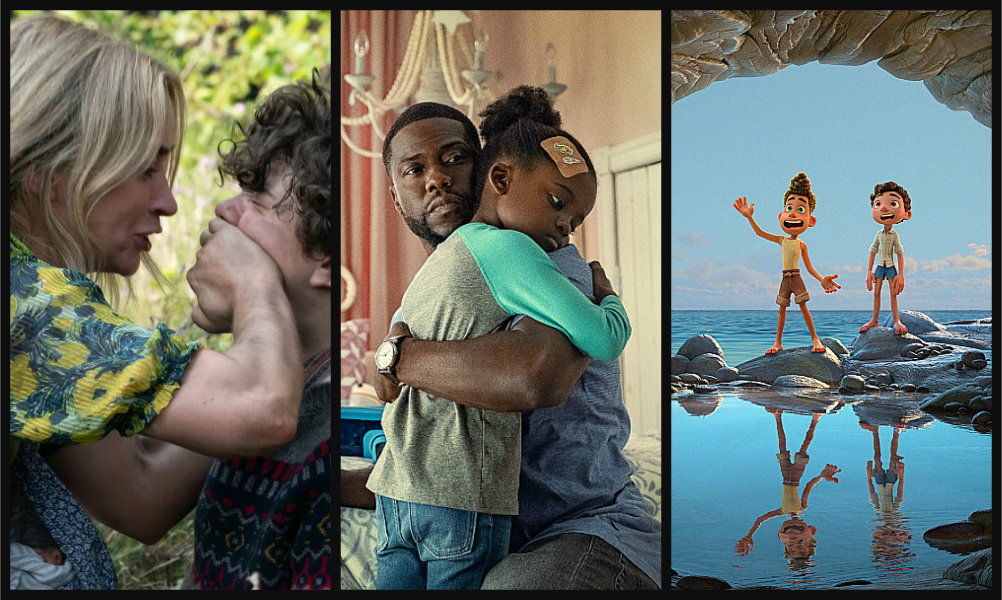 Most theatres are back and screening, and judging by Tuesday night, people are coming. I didn't count or even look around, but the limited seats seemed to be occupied at the Scotiabank. And surprise, there was Dr. Isaac Bogoch, the expert so often seen in newscasts during this pandemic, up there on the screen in a video telling us to wear our masks. Watching a movie that way is no fun, and worse, every cough you hear nearby is worrying.

But the movies are back. I've got reviews of one that's a giant hit already, and more. Meanwhile, some notable other ones are now available: the acclaimed Canadian film Akilla's Escape is streaming from VIFF Connect, the brilliant New Order, about inequality, is now at the Rio as well as on Apple TV and Google Play, and French Exit, which won Michelle Pfeiffer a best actress nod at the Canadian Screen Awards, is now available across all digital and on-demand platforms.

And there are these...

A QUIET PLACE, PART II: This was the film that was the first to be blocked when the theatres closed last March. It's now been out for a couple of weeks in some places and has already earned over $100 million. That makes it the first big hit of the pandemic era, and it finally arrived for us. “Intense” was the immediate review from a woman at the theatre the other night. I agree, but I was a little disappointed. Maybe because it's not that much fun watching a movie wearing a mask, but mostly because the novelty that made the first film so thrilling and suspenseful isn't new anymore. What we get is more of the same.

The film picks up right after the first, but includes a prologue that shows what happened before. A small-town baseball game is interrupted by a streaking arrival in the sky. These are the creatures we know. They have almost no vision, but super hearing. You have to stay absolutely silent so they won't know you're there. Walking on gravel paths or woody trails is dangerous. Cellphones can ring at the wrong time. Worse, the mother (Emily Blunt) has to keep her baby from crying.

She and the children (Millicent Simmonds and Noah Jupe) are hiding in an abandoned warehouse and the film sends them on separate paths. Millicent, the real star this time, senses a radio station playing the song Beyond the Sea is really pointing to a safe place. She and a family friend she meets (Cillian Murphy) go looking for it. The others stay put, but when her brother steps on a leg-hold trap, mom has to keep him from yelling out. The perils keep coming and the film intercuts between the two groups several times to show them. They build suspense terrifically. John Krasinski's direction takes us right in close, so we really feel it. He also shows the creatures more often this time. But the script, which he helped write, still doesn't clear up the story or end it. It feels mandated that way. (Scotiabank and other theatres) 3½ out of 5

FATHERHOOD: Here's a very nice surprise. Kevin Hart, the usually motormouth comedian, is playing it straight and doing a good job. He plays a single father (wife died in childbirth) and learns with some exhausting effort what it takes to raise a child from infancy to about age nine. We see all the phases: changing diapers, dealing with crying, working that baby seat buckle in the car, watching your language, choosing a babysitter. Parents will recognize it all. Also, the stresses: at work with a boss played by Paul Reiser, with pals, parent support groups, and the grandparents with their advice and sometimes orders. Hart says he's trying to correct the sometimes bad image of Black fathers.

The issues feel real because they are. They're from a memoir by Matt Logelin, which started as a blog and became conversations with Ellen and Oprah and then a bestselling book. Hart plays him, and a particularly endearing young actor named Melody Hurd plays his daughter when she's grown to school age. Like a lot of kids that old, she's aware and knowledgeable. There's also a rules run-in with the nuns at her school. Alfre Woodard as a mother-in-law and DeWanda Wise as a love interest are standout actors in this mostly Black cast. Paul Weitz is known for both American Pie, long ago, and Grandma, more recently. (Netflix) 4 out of 5

LUCA: Pixar's latest is not in theatres as intended, but streaming on Disney+, and a little different in another way that's significant. It's smaller than usual and gentle, not as heavy with emotion. Rather, it's a love letter to small-town life, this time in Italy, thanks to its creator Enrico Casarosa, a veteran at the studio. (He had an Oscar nomination 10 years ago.) Here he's reliving the summers of his youth through the exploits of two boys voiced by Jacob Tremblay and Jack Dylan Grazer.

Actually, they only pass themselves off as boys. They're sea creatures who live underwater and are forbidden to go on land where fishermen and townspeople fear them as “sea monsters.” Alberto (Grazer) dares to go up anyway and dreams of riding a Vespa motorized scooter. Timid Luca (Tremblay) goes along (“Your life is so much cooler than mine”). They arrive just in time for an annual race, join a girl who'll compete in it, and meet a local bully and braggart (“This is my town”), who resolves to “destroy” them. But it's not the race that centres this story; it's friendship, finding your own way (Maya Rudolph and Jim Gaffigan voice Luca's forbidding parents), and a bit of accepting different lifestyles. It's low-key and pleasant. Trivia: Sacha Baron Cohen has a small voice cameo as a crusty uncle. (Disney+) 3½ out of 5

LOKI: Episode 2 did not disappoint. It's even better than the first, and adds to it with both philosophy and anticipation. Recall that the Marvel movies mischief-maker Loki (Tom Hiddleston) is being investigated for violations of “the sacred timeline.” Owen Wilson as an investigator with the Time Variance Authority interrogates him at the behest of a judge (Ravonna Renslayer played by Gugu Mbatha-Raw) and the mysterious higher powers called the Timekeepers, who we have yet to meet.

Loki is a variant, an ironic word at this time in the COVID-19 epidemic, but not at all related. Is he the only one? Is he the main one? What can he cause? A new divergent branch in the timeline, that's what, and the potential chaos the Timekeepers are trying to avoid. So Loki is being asked to help catch “the superior version” of himself. The episode goes far back to Pompeii and ahead to 2050, and a big debate forms over whether anything really matters. It's quite a mind trip, but very entertaining. (Disney+) 4 out of 5

CHAINED: The best British Columbia film of last year, said the Vancouver Film Critics Circle, which also named its writer/director, Vancouver-based Titus Heckel, “one to watch.” Deserved accolades, I say. There were nominations at various film festivals, too. But there's a fair amount of quibbling warranted because the story has a lot that's unlikely in it.

It centres on a 13-year-old boy played by Marlon Kazadi (ingratiating) who's badgered by his police officer father to stand up for himself, be a man and fight back. It's a theme that'll keep coming back on him. But he, along with his girlfriend (Leia Madu), dreams of becoming an organic farmer. One day, he wanders into an abandoned warehouse and finds a man (Aleks Paunovic) chained up with a dead body nearby. I didn't do that, the guy insists, and, when the boy refuses to release him, starts his own tirade about how to be a man. Eventually, it gets down to how to kiss a girl. There's a bag of money, a turnaround and some surprise connections involved, and it all plays well under Heckel's steady direction. It's the story that doesn't quite fit together. (Available since Tuesday from VOD/EST platforms) 3 out of 5

CENSOR: I've sometimes wondered what it is like to work as a film classifier, watching movies not for pleasure but to note bad language, violence and excessive horror and make a list. Or years ago, as in the 1980s when this film is set, order cuts. How would that affect you? This one starts but doesn't finish an answer. Enid, the protaganist, turns paranoid and fearful but not because of what her work is doing to her as she watches and counts beheadings and other gross scenes in films like Cannibal Carnage. This is a tribute of sorts, not a critique, to the dozens of these films that VHS brought around. In England, where they were called “video nasties” they started a debate. Do they lead to copy-cat crime? That discussion is skimpy and secondary.

Up front is a re-creation of the genre, with many examples, and a parallel story all imagined by Welsh director/writer Prano Bailey-Bond. Enid (Niamh Algar) watches a film that seems to reflect an incident in her life. Her sister is missing, her parents want to officially declare her dead, but is that her in the video under another name? Good mystery, opened up very well but fragmented by flashbacks, doubts about what is real and not and run out of steam before the end. It's for fans who remember the era fondly. (Available on platforms like Apple TV/iTunes and Google Play). 2½ out of 5