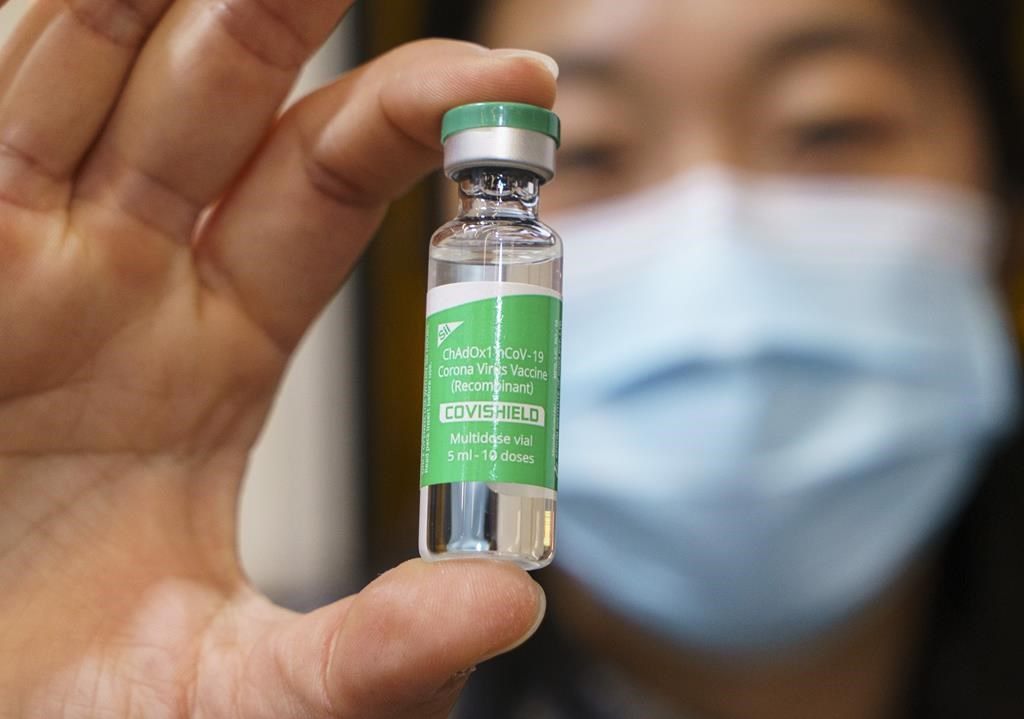 A healthcare worker holds up a vial of the AstraZeneca Covishield vaccine at a COVID-19 vaccination clinic in Montreal, Thursday, March 18, 2021. File photo by The Canadian Press/Paul Chiasson
Previous story
Next story

Canadians fully immunized with two shots of the Oxford-AstraZeneca COVID-19 vaccine may now attend a highly anticipated Broadway production featuring Bruce Springsteen, but at least one Canadian hoping to take in the show still has questions about whether or not he can attend.

David Screech said Saturday he was pleased to hear that the theatre staging "Springsteen on Broadway" had amended rules that previously barred AstraZeneca recipients from attending the production featuring The Boss in an acoustic performance.

Jujamcyn Theaters had previously said audience members wishing to attend the show needed to be immunized with vaccines approved by the U.S. Food and Drug Administration, leaving those who received AstraZeneca on the sidelines. The theatre amended those rules on Friday, citing adjusted guidance from New York State, and now says it will accept audience members vaccinated with shots approved by either the FDA or the World Health Organization.

The move means people like Screech, who received two doses of the AstraZeneca vaccine, are now theoretically cleared to attend the performance.

But Screech, the mayor of View Royal, B.C., said he's still hoping to resolve some questions before booking his ticket.

"The next concern now is what will be an acceptable form of proof when you get to the theatre door," he said in a telephone interview. "I have emailed the theatre this morning to ask them that. Provided I can have something that will work, I think I'll definitely still go in late August."

Screech found the previous decision to exclude AstraZeneca recipients from public events baffling considering the vaccine's broad global uptake. The product was widely used in countries including the United Kingdom, and at least two million Canadians have been at least partially immunized with the AstraZeneca vaccine.

Public health experts also decried the move, describing the decision to give the green light to one country's list of approved vaccines as arbitrary and saying such an approach could pave the way for vaccine nationalism.

"Springsteen on Broadway" wasn't the only form of entertainment barred to AstraZeneca recipients. Other New York attractions, including "Saturday Night Live" and "The Tonight Show Starring Jimmy Fallon," still say those who received the shots cannot attend live tapings.

Canada and the United States extended restrictions on non-essential travel on Friday, keeping the border between the countries closed until at least July 21.

Prime Minister Justin Trudeau has said 75 per cent of Canadians would need to receive a first vaccine dose and 20 per cent would need to be fully immunized with two before rules can be loosened, thresholds the country crossed on Saturday.

More details on rules for vaccinated Canadians and permanent residents are scheduled to be unveiled on Monday.

Trudeau said the government plans to have Canadians upload proof of vaccination pictures to the ArriveCan app so border agents can verify someone is fully vaccinated when travelling this summer.

For the fall, Trudeau said federal officials are working with provinces to automatically share vaccination status, which could then be accepted around the world.

He also said the government is working with other countries on ensuring travellers who receive vaccines not approved in their destination countries are still able to enter safely.

This report by The Canadian Press was first published June 19, 2021.