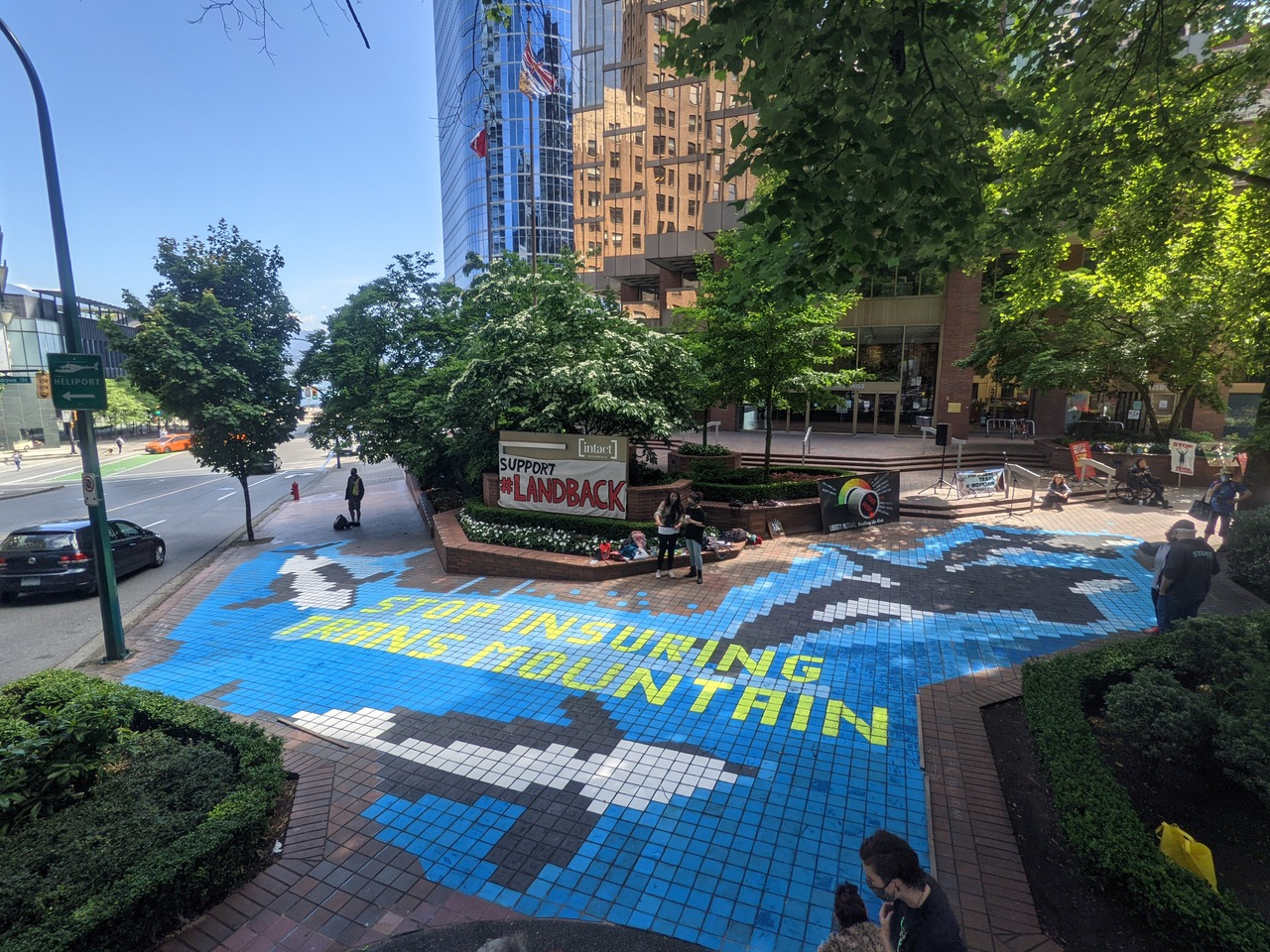 Friday marked the end of a global week of action against insurers of Canada’s Trans Mountain pipeline and its expansion project. The protests, calling on its insurers to cut ties with the federally owned pipeline, spanned 25 actions across four continents.

Over the course of the week, Indigenous rights and climate activists from Vancouver to Kiribati to Sierra Leone called on Liberty Mutual, Chubb, AIG, W.R. Berkley, Lloyd’s of London, Starr, Stewart Specialty Risk Underwriting, and Marsh to publicly pledge to refrain from doing any future business with the project.

“The reason we're here is to drive out insurance companies from insuring fossil fuel industry projects, and in particular Liberty Mutual today (with) the Trans Mountain pipeline,” said 350 organizer Andrew Larigakis, from outside Liberty’s office in Vancouver.

“Even if the insurers don't completely bail out this year, every year they have to renew, so there's always tomorrow. And we'll keep pushing. We're not going anywhere, we live here, and they're attacking us.”

“It is vital to divest for the survival of our resident orca whales. We will fight for our lands, waters and people until we win,” said Cedar George-Parker, a member of the Tsleil-Waututh Nation and Tulalip Tribes, in a statement.

Today in the Marshall Islands, we #RaiseAPaddle in solidarity with thousands of Indigenous people around the world calling for an end to insurance to the Trans Mountain Pipeline.

In Fiji, despite the current COVID situation, we know the urgency of the climate crisis and the need to protect our communities from its impacts.

This is why we #RaiseAPaddle to stop insurance to the TransMountain Pipeline. #StopTMX pic.twitter.com/0Ujzj1NjeL

Community organizers in Sierra Leone calling on insurers to drop the Trans Mountain pipeline today because of the life threatening flooding is having on their community.

“Our ongoing campaign is to move the finance industry, in particular the insurance industry, away from insuring some of the most dangerous projects," says @svenbiggs. #cdnpoli #TMX

Argo, one of the companies that currently insures Trans Mountain, recently confirmed it will not cover the pipeline or its expansion project, which would carry an extra 590,000 barrels of oil a day from the Alberta oilsands to British Columbia. Since then, two other insurance companies that had previously insured Trans Mountain but are not current insurers, Scor and Lancashire, have cut ties too.

“There's now 14 insurance companies that have ruled out insuring the Trans Mountain pipeline, and have adopted a policy against insuring other tarsands projects like it,” said Sven Biggs, Stand.earth’s Canadian oil and gas program director.

The shrinking pool of insurers is concerning to the Crown corporation, which is already behind schedule with expansion plans, because it means it is paying higher premiums to secure its required coverage. The Canada Energy Regulator (CER) recently gave Trans Mountain the green light to shield its list of insurers from the public for this reason. The company argued if it could not keep its insurers private, “targeting and pressure” could result in a “material loss” to the company and “prejudice the competitive position of its insurers.”

“Our ongoing campaign is to move the finance industry, in particular the insurance industry, away from insuring some of the most dangerous projects,” said Biggs. “A lot of insurance companies were already on record as not supporting coal projects, and we're just trying to move that goal to the next place that we need to go.”

Biggs added the pipeline is expected to be a money-loser, and as construction delays and higher premiums weigh on the project, pressure is mounting.

“No way this project is viable for a private buyer unless it’s sold at a deep discount, so we are pushing the federal government to release a cost update on construction, because we know that the current price tag ($12.6 billion) is outdated,” said Biggs. “And I think the Canadian public should be concerned about how much money is basically going to have to be given away to make this construction viable for a buyer.”

On the first day of the global week of action against Trans Mountain, Calgary-based Pembina Pipeline announced a business update outlining how it intends to buy Trans Mountain through Chinook Pathways Partnership, an agreement between Pembina and a wholly Indigenous-owned company called the Western Indigenous Pipeline Group.

“There's always been some nations that are willing to do business with Kinder Morgan and Trans Mountain, and there are many other nations that are still vehemently opposed,” said Biggs. “So it's like the Nord Stream pipeline that the Russians are trying to build across Eastern Europe. If the Poles say no to it, it doesn't matter that the Belarussians and the Germans are onside, you still can't build your pipeline, and it's the same thing as the Tsleil-Waututh and other nations.”

The pipeline’s current insurance policy is scheduled to expire at the end of August.

Editor's note: The headline of this story was updated on June 22, 2021. Story updated per Trust Project guidelines.

I am curious what other

I am curious what other pipelines being built around the world are being protested to the same extent as TransMountain.