During wildfires and hurricanes, a language gap can be deadly 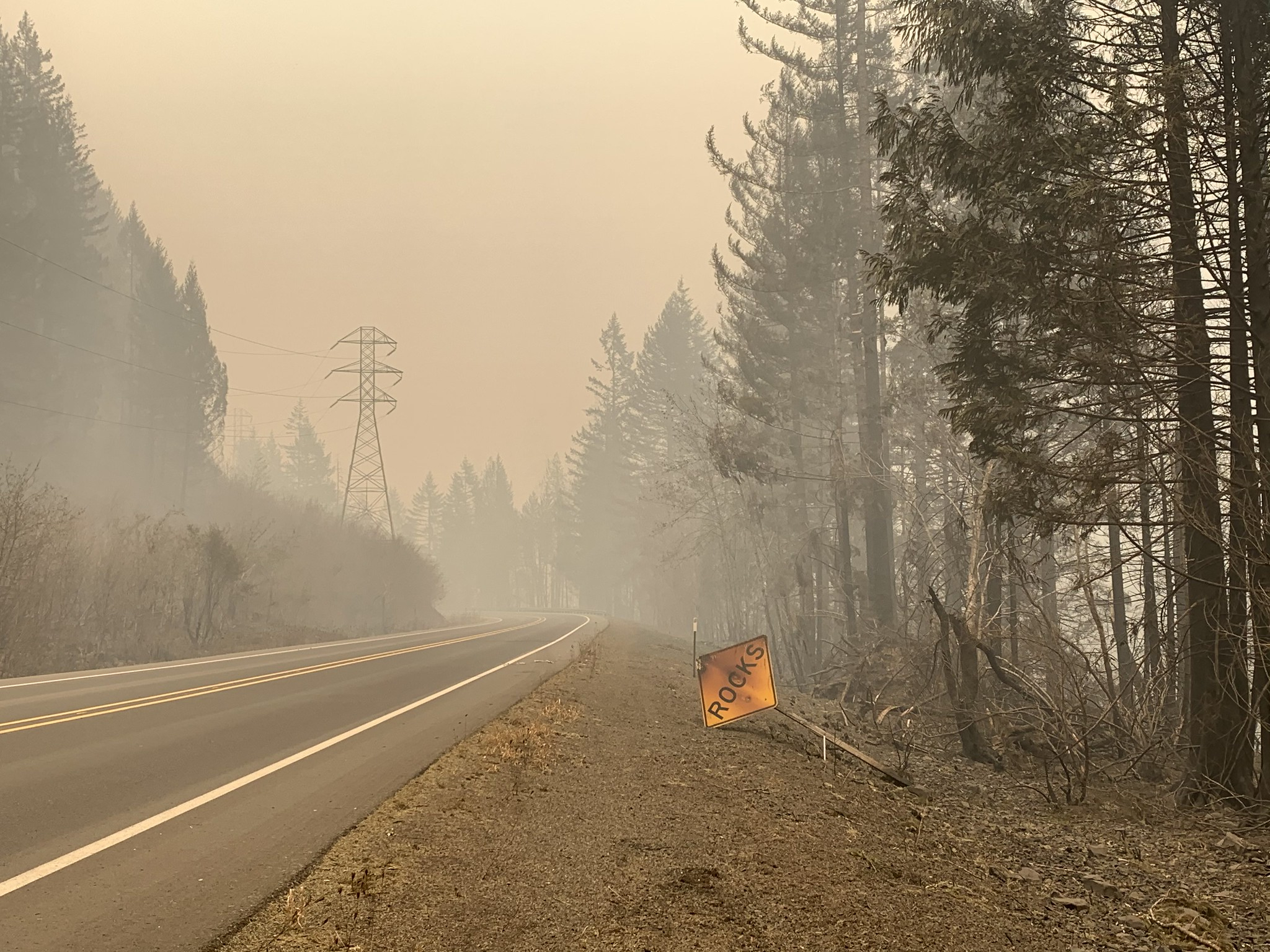 Migrants are especially vulnerable to disasters and systematically left behind when they strike, in part because local governments and institutions often fail to translate important notices. Photo Oregon Department of Transportation / Flickr (CC BY 2.0)
Previous story
Next story

Living along the path of a wildfire, hurricane, or tornado is a terrifying experience under the best of circumstances, but it can be a particularly dangerous situation for people who primarily speak languages other than English.

Maryam Kouhirostami knows that feeling well. In September 2019, the Iranian-born doctoral student was studying construction management at the University of Florida in Gainesville. Though she’d received an email warning from her school about hurricane Dorian, which had just hit the Bahamas as a Category 5 storm, she had no idea what to expect. A friend had told her it would probably just be “a regular, rainy Florida day” where you could ride your bike down the street.

The storm weakened significantly by the time it hit Kouhirostami’s neighbourhood, but it was still powerful enough to knock out her power for half a day. “It was scary, because I couldn’t see outside what was going on around the city, I could just see through the window,” she said. “It was heavy, heavy rain. I’ve never seen something like that in my country.”

Kouhirostami speaks English very well, but tough-to-translate words still mix her up occasionally. She said she felt unprepared for her encounters with hurricanes and tornadoes — which were not only foreign words, but completely foreign weather phenomena. After the storm hit, she stayed inside her apartment for four days, too terrified to leave, waiting for an email from the university telling her it was safe to come out.

Migrants like Kouhirostami are especially vulnerable to disasters and systematically left behind when they strike, in part because local governments and institutions often fail to translate important notices. When hurricane Katrina hit New Orleans in 2005, for example, many Vietnamese and Latino immigrants had a harder time understanding storm warnings and evacuation orders, since the broadcasts were only in English. In 2013, tornadoes in Oklahoma killed nine people from the Guatemalan community, and a National Weather Service report found that the lack of severe weather information in Spanish may have contributed to their deaths.

Roughly one in five residents in the United States — about 67 million people — speak a language other than English at home. While many also speak English fluently, recent research suggests that hearing emergency warnings in a non-native language can make it more difficult to process what’s happening in a situation where time is of the essence. To make matters worse, the changing climate has been making many natural hazards even more hazardous. Forecasters anticipate another active hurricane season in the warming Atlantic, following a record-breaking season last year. Wildfire season has already begun in the West, where widespread drought has left the land parched and ready to burn.

It’s imperative that local governments provide live translations of emergency information for migrants, interpreting warnings in a way that is culturally appropriate and sensitive to their needs, said Michael Méndez, an assistant professor of environmental planning and policy at the University of California, Irvine. “It should be a requirement, in this day and age, in the era of climate change, that no county government should have an outdated disaster plan.”

The importance of translation in community disaster preparedness is a lesson many areas are only learning with hindsight.

“I hate the idea that if you’re not able to speak a certain language, then you become responsible for your own fate,” says researcher Amer Abukhalaf. #EmergencyAlerts #LanguageBarriers

In late 2017, the Thomas Fire began burning through California’s Ventura and Santa Barbara counties, where one in three residents speak a language other than English at home. Faced with the task of notifying community members about evacuation areas, shelters, road closures, air quality, and unsafe drinking water, local government officials found themselves largely unprepared, according to a study co-written by Méndez.

At first, crucial information was only made available in English. Ventura County eventually created a Spanish option using Google Translate — but the automated service was not a great fit for certain disaster vocabulary. For example, instead of turning the phrase “brush fire” into incendio forestal, it grabbed the Spanish word meaning “hairbrush.” Local justice groups stepped up to try to fill in the gaps, translating emergency information and providing resources for farm workers and undocumented immigrants.

A California state audit later found that Ventura, Butte, and Sonoma counties had failed to send evacuation notices in languages other than English during the Thomas Fire, as well as the 2017 Sonoma Complex fires and the 2018 Camp Fire, putting people at increased risk.

The resulting public outcry helped prompt county-level officials to make some improvements in recent years. Méndez pointed to Sonoma County’s Office of Equity, established last year, and Ventura and Santa Barbara counties hiring full-time Spanish-speaking public information officers. But he says the problem is very far from being solved. While non-English speakers often get lumped into one group, they have very different needs — for example, many of the area’s Indigenous immigrants from Mexico speak languages like Mixtec, but not English or Spanish.

Christine McMorrow, an information officer at the California Department of Forestry and Fire Protection, or Cal Fire, said that the agency has been translating updates into Spanish when possible, both online and on camera, calling on Spanish speakers within the organization to help. The official website has options for translation into a dozen languages. McMorrow said that Cal Fire is aware that there is a “true need” for multilingual emergency information, and that the organization is gradually building that capability, prioritizing languages including Hmong and Arabic.

“We have so many languages that are spoken in California, and we know we’re not going to be able to translate everything into all of those languages,” she said. “But we are working towards language inclusiveness so that we can get that message out there to folks.”

Even when warnings do get translated, other problems can still arise. In a study last year, researchers at universities in Florida and the United Kingdom analyzed translations of common words in hazard communication, like resilience, vulnerability, and disaster. Using examples from 54 languages, they found that crowd-sourced translations of these words “often meant little to local people.” In Afrikaans, resilience was translated to veerkragtigheid, a word meaning “spring-like” that captures the sense of bouncing back, but not of overcoming an obstacle. Other translations emphasized unfortunate aspects of their meaning. Vulnerability, for instance, was often translated to words that conveyed weakness, portraying people as victims and disregarding their ability to cope.

The resulting language gap can add insult to injury, particularly in disaster-prone areas.

When Amer Abukhalaf moved from Columbus, Ohio, to Gainesville, Fla., a couple of years ago, hurricanes were on his mind. He arrived in August, peak season, and only had one month to settle in before hurricane Dorian struck. As a native Arabic speaker and a PhD student researching emergency management, he did not think the storm warnings would be well-understood by the many migrants in the city. “We have a huge community here that literally has no idea what’s going on,” he said.

The experience prompted him to investigate, interviewing international students like Kouhirostami to learn more about these communication gaps. In the resulting study, Abukhalaf found that seemingly minor deviations in translation led to big problems: people confusing one disaster with another, misinterpreting advice, or even creating unnecessary panic.

When speaking a non-native language, “your mental activities are slower,” Abukhalaf said, “so you perceive things in a less accurate way, and you need more time to comprehend it.” Putting an additional translation burden on non-English speakers during a disaster, he argues, shows a lack of concern for their welfare.

“In times of emergencies, we’re assuming it’s very stressful times, but we still choose to communicate to these people in one language, and most of the time we’re doing it because it’s easier and it is just cheaper,” Abukhalaf said.

“I hate the idea that if you’re not able to speak a certain language, then you become responsible for your own fate. It’s a very disturbing idea. If you don’t speak the language enough, then it’s your fault to be here? I don’t think that should be right.”

By Adina Bresge | News, Politics | May 4th 2020
Coronavirus in Canada

It is understandable that

It is understandable that emergency notices should be made available in as many languages as possible. A number if not most of these are common languages and most likely in this day and age your computer can do the translation for you. However, in Canada we have two official languages and you are suppose to be able to speak one or the other in order to become a citizen of Canada. I do not see an obligation for the government to deal with other languages. Imagine once the indigenous, who apparently are made up of about 600 nations, have all gone back to their original languages, will it then be up to the government to ensure all notices include these 600 languages which I doubt are common in terms of the ability of a computer to do the translation. I hope each one of these nations retains someone who can speak one of the official languages and translate it for those who only speak one of the indigenous languages.