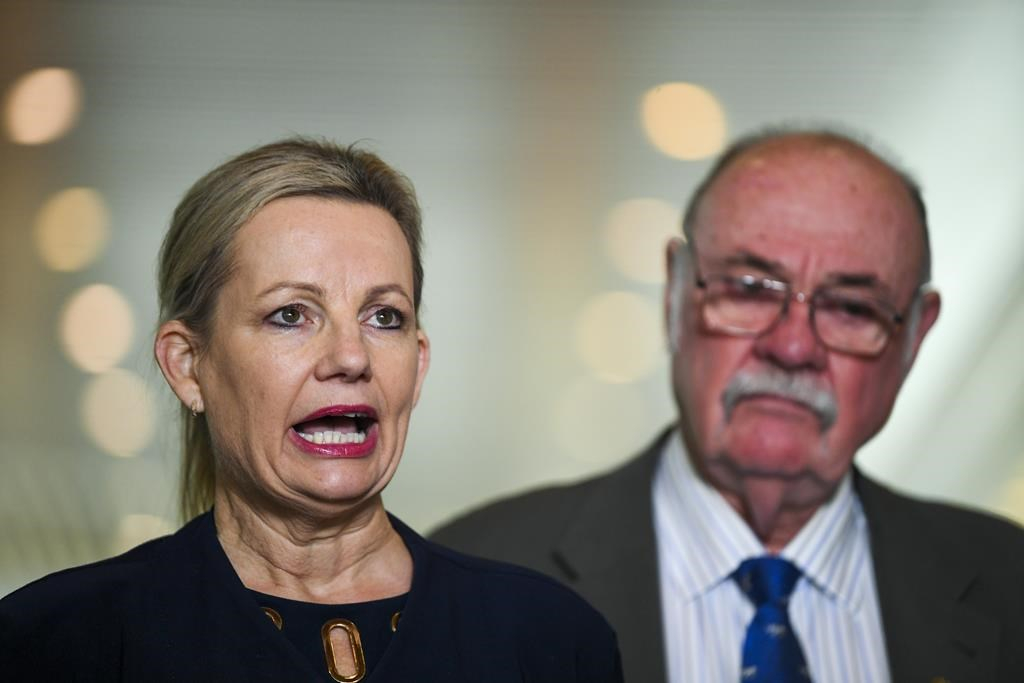 Australian Environment Minister Sussan Ley, left, speaks to the media during a press conference at Parliament House in Canberra, on Tuesday, June 22, 2021. Photo by Associated Press/Lukas Coch/AAP via AP
Previous story
Next story

Australia said Tuesday it will fight against plans to downgrade the Great Barrier Reef’s World Heritage status due to climate change, while environmentalists have applauded the U.N. World Heritage Committee’s proposal.

The committee said in a draft report on Monday that “there is no possible doubt” that the network of colorful corals off Australia’s northeast coast was “facing ascertained danger.”

The report recommends that the world’s most extensive coral reef ecosystem be added to UNESCO’s List of World Heritage in Danger, which includes 53 sites, when the World Heritage Committee considers the question in China in July.

The listing could shake Australians' confidence in their government's ability to care for the natural wonder and create a role for UNESCO headquarters in devising so-called “corrective measures,” which would likely include tougher action to reduce Australia's greenhouse gas emissions.

Any downgrade of the reef’s World Heritage status could reduce tourism revenue that the natural wonder generates for Australia because fewer tourists would be attracted to a degraded environment and dead coral.

Reef cruise operators said the report was wrong and that tourists continued to be awed by dazzling coral and multicolored fish. But some tourists said the reef had seemed more colorful during visits decades ago.

Australia, which is one of 21 countries on the committee, will oppose the listing, Ley said.

“This decision was flawed. Clearly there were politics behind it,” Ley told reporters. “Clearly those politics have subverted a proper process and for the World Heritage Committee to not even foreshadow this listing is, I think, appalling.”

But its health is under increasing threat from climate change and rising ocean temperatures.

The report found the site had suffered significantly from coral bleaching events caused by unusually warm ocean temperatures in 2016, 2017 and last year.

The reef would become the first site to be added to the List of World Heritage in Danger primarily for climate change reasons, Zethoven said.

“It would be a very significant step for the World Heritage Committee to make this decision and one that we really hope that it does make because it will open up a lot of potential change,” she said.

Richard Leck, a spokesman for the environmental group WWF, said listing the reef as in-danger would be “a real shock" to many Australians.

In 2014, Australia was warned that an “in danger” listing was being considered rather than being proposed for immediate action.

Australia had time to respond by developing a long-term plan to improve the reef’s health called the Reef 2050 Plan.

The committee said this week that plan “requires stronger and clearer commitments, in particular towards urgently countering the effects of climate change.”

“I know ... that climate change is the biggest threat to the reef and in no way am I stepping away from that recognition and countries including European countries have got strong views about what policies different countries should have on climate change and I understand that as well, but this is not the convention in which to have those conversations,” Ley said, referring to the Convention Concerning the Protection of the World Cultural and Natural Heritage.

Terry Hughes, director of the Australian Research Council’s Center for Excellence in Coral Reef Studies, said Australia’s refusal to commit to a net zero carbon emissions target by 2050 made the country a “complete outlier.”

“This draft decision from UNESCO is pointing the finger at Australia and saying: ’If you’re serious about saving the Great Barrier Reef, you need to do something about your climate policies,’” Hughes told Australian Broadcasting Corp.