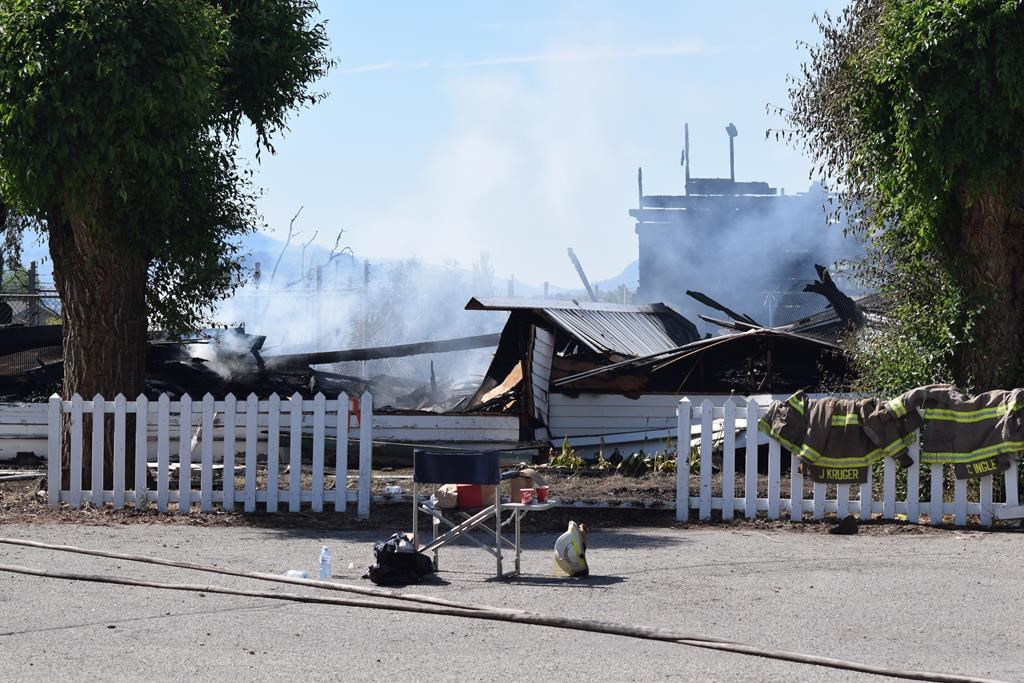 Firefighters' jackets hang on the fence of the burned-out remnants of Sacred Heart Church on the Penticton Indian Reserve, near Penticton, B.C., in a Monday, June 21, 2021, handout photo. Handout photo by The Penticton Herald/James Miller
Previous story
Next story

A First Nations chief in southern British Columbia says there are mixed feelings in his community after a Catholic church burned to the ground in an overnight fire, one of two Catholic churches in the area that were destroyed in blazes that police consider suspicious.

Chief Greg Gabriel of the Penticton Indian Band said the Sacred Heart Church was a community fixture that hosted weddings and funerals but many people also feel pain due to the Roman Catholic Church's role operating abusive residential schools.

"There's a lot of anger, a lot of hurt in every First Nations, Indigenous community throughout Canada," he said, adding that he was not speculating on the cause of the fire.

Sacred Heart is one of two churches in the area that were destroyed by fires early Monday morning.

Less than two hours after a patrol officer found it engulfed in flames, RCMP said a second fire was reported at St. Gregory's Church on the Osoyoos Indian Band reserve lands near Oliver, B.C.

RCMP said in a statement they are investigating both fires as suspicious.

"Should our investigations deem these fires as arson, the RCMP will be looking at all possible motives and allow the facts and evidence to direct our investigative action," Sgt. Jason Bayda said in the statement.

"We are sensitive to the recent events, but won’t speculate on a motive."

The fires come less than one month after the Tk'emlups te Secwepemc Nation in B.C. announced the discovery of what are believed to be the remains of 215 children at the site of the former Kamloops Indian Residential School. It operated between 1890 and 1969, when the federal government took over operations from the Catholic Church and operated it as a day school until it closed in 1978.

Gabriel said the news of the unmarked graves rippled through the community and he wants to see those responsible held criminally accountable.

Police said they are liaising with both the Penticton and Osoyoos Indian Bands as part of the investigation into the church fires.

Gabriel said he was awoken by a staff member calling at 2 a.m. to report the church was on fire.

"I quickly rushed down to the church site and by the time I got there it was already gone. It was a very old church and didn't take very much time for it to completely burn down," he said.

The church was built around 1912, he said. It was adjacent to a day school for Indigenous children that also burned down years ago after it was shut down, although Gabriel did not believe that fire was suspicious.

"I attended that school myself, the Indian day school. Even though it wasn't as traumatic as the residential school, we still suffered the abuse to some extent from the priests and the nuns," he said.

Children at the day school also attended religious services at the church, he said.

"Having said all that, there was a lot of community members today, especially the elderly ones (who were) saddened by the loss of this church because there were so many memories that were generated over the years — their children's baptism, their grandchildren's baptism," Gabriel said.

"There's mixed feelings throughout the community on the loss of this church."

Rev. Obi Ibekwa said he's the pastor for three parishes in the area including Sacred Heart Mission. He also arrived at the church grounds Monday morning to see what happened to the church, which he said had an average of seven attendees for weekly services.

"I would like to have an open mind and allow the investigation to play out."

— By Amy Smart in Vancouver.