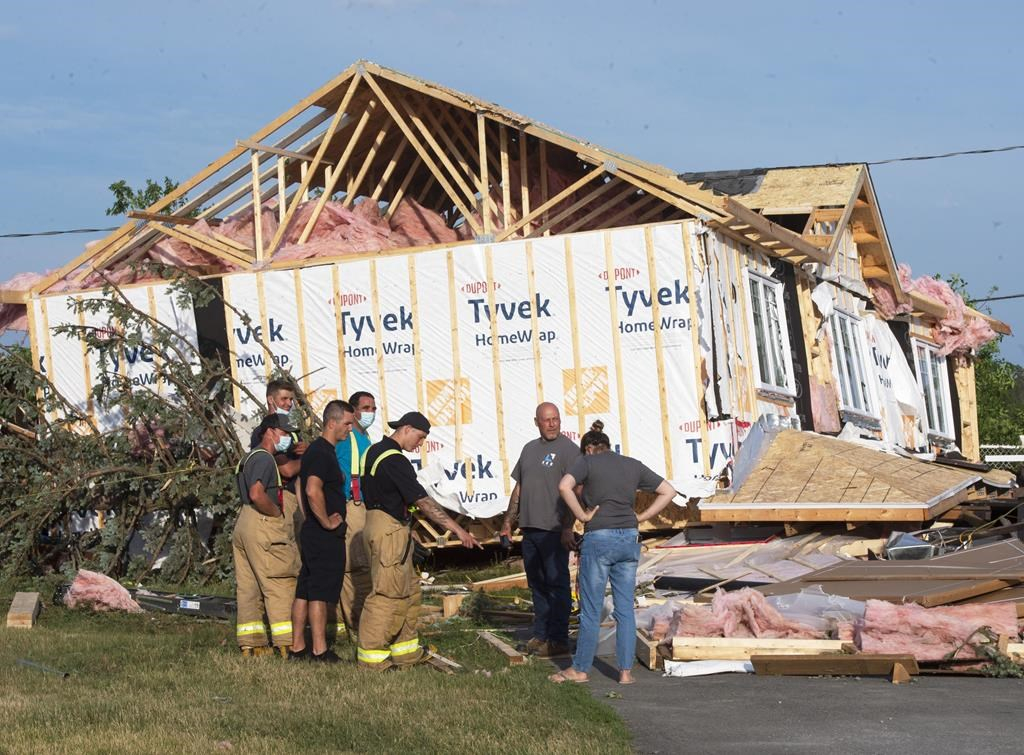 People look over the damage after a tornado touched down in Mascouche, Que., north of Montreal, on Monday, June 21, 2021. Dozens of homes were damaged and one death has been confirmed. Photo by The Canadian Press/Ryan Remiorz
Previous story
Next story

One person was killed after a tornado struck Mascouche, Que., a suburb north of Montreal, late Monday afternoon.

Marisa Curcio, a spokeswoman for the municipality, said the tornado touched down just before 4 p.m. in a neighbourhood in the northeastern part of the town, bordering on Highway 25, located about 45 kilometres from Montreal.

She confirmed the death of one male resident and said public works and the fire department are trying to secure the area. Jean-Pierre Boudreau, the fire chief, told all-news network LCN the man had taken refuge inside a shed when the tornado hit.

Steve Boily, a meteorologist with Environment Canada, said officials inspected video circulating on social media and images of the damage to assess the storm.

"We confirm it was a tornado, but we didn't have the opportunity to go into the field yet to confirm the strength," Boily said in an interview.

"We have seen video evidence showing debris flying around, a funnel cloud. We have reports of a lot of (damaged) roofs and damage to houses."

Mayor Guillaume Tremblay wrote on his Facebook page there was damage reported in several parts of the city, and emergency teams had been dispatched to those sectors hardest hit. Officials asked curious onlookers to steer clear of the area.

Boily said the town in the Lanaudière region was under a severe thunderstorm watch, but no tornado warning was issued before it struck. Social media users posted photos and videos of the funnel cloud and the ensuing damage.

Boily said they were tracking many storms over southern Quebec and after confirming the Mascouche strike, it issued a tornado alert for the region south of Quebec City. About 30 minutes later, a second suspected tornado struck in the Chaudière-Appalaches community of St-Narcisse-de-Beaurivage.

"We cannot confirm that one, but there's a lot of evidence there was a tornado over there also," Boily said.

Quebec Public Security Minister Geneviève Guilbault extended her condolences to the family of the victim in Mascouche on Twitter and said provincial officials were mobilizing to help those affected.

“Unfortunately, we are told that a man has died," she wrote. "Our thoughts are with his family and loved ones. Our government teams are mobilized on the ground to come to the aid of the disaster victims and to support the municipal authorities.”

The Quebec branch of the Red Cross said between 50 and 100 people were being taken care of with offers of food, clothing and temporary shelter.