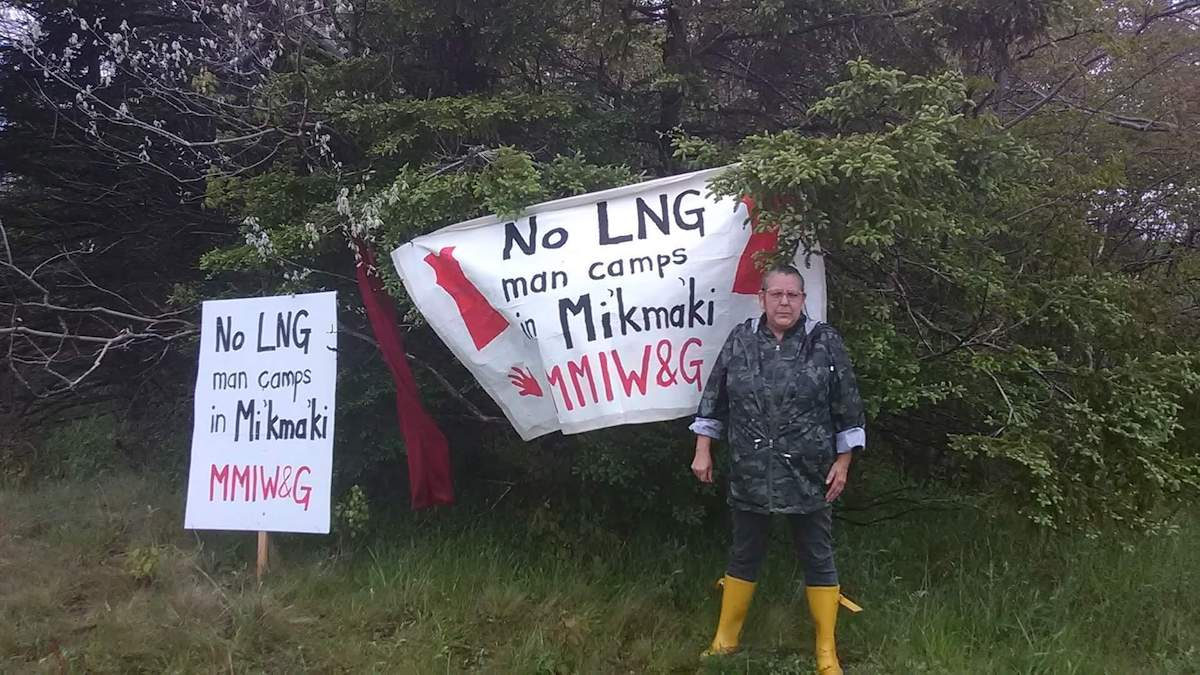 Margaret Cook has posted signs opposing the Goldboro LNG project along the 200-kilometre route between her home community of Millbrook First Nation and the project's location on the Atlantic coast. Photo submitted by Margaret Cook
Previous story
Next story

For much of the pandemic, Nova Scotia has been closed to the outside world. But a proposed natural gas project in the province — dubbed “the last one standing” by the CEO of the company behind it — is reaching across borders nonetheless.

The Goldboro liquefied natural gas (LNG) export facility, proposed by Calgary-based Pieridae Energy Limited, would see the company exporting 5.2 million tonnes of natural gas annually, mostly for the German utility Uniper, starting in 2025. With many other LNG projects being cancelled, Pieridae CEO Alfred Sorensen has said the Goldboro project looks increasingly like the only one left of its kind in North America (construction on an LNG export facility that will export to Asian markets is underway in B.C., with three others proposed in that province).

As the project approaches the deadline set by Pieridae to decide its fate, it’s facing hurdles, including an as-yet-unsuccessful pitch for nearly $1 billion in federal funding — without which the company has said moving ahead with the project would be “difficult.” Aside from the money, the biggest threat to the project is a pending regulatory decision in Alberta that will determine the viability of its gas supply.

In the interim, Pieridae is being inundated with complaints from communities across North America — from Mi’kmaw groups in Nova Scotia to advocates in Alberta and Massachusetts. They are pushing back against the proposal, citing concerns with everything from the work camps required to construct the facility to the infrastructure required to produce the gas and pipe it to Nova Scotia.

One of Pieridae’s biggest obstacles is in Alberta, where advocates for better management of orphaned oil and gas wells have identified issues with Pieridae’s plan for sourcing the gas that would be exported from the facility.

In 2019, Pieridae made a play to acquire aging sour gas wells and infrastructure in Alberta from Shell to supply the Goldboro LNG facility.

But the transfer of the licences was blocked in May 2020 by the Alberta Energy Regulator, which cited concerns about the division of responsibility (Shell had said it would remain responsible for groundwater contamination, and Pieridae for well cleanup).

The spectre of that transfer has been revived recently after Shell made another bid to sign over the licences to Pieridae, prompting the filing of several dozen statements of concern to the Alberta Energy Regulator.

One of those statements was from the Polluter Pay Federation (PPF). PPF Chair Dwight Popowich — who has seen the effects of orphan wells first-hand after the operator of a well on his land went bankrupt — said the transfer is a clear example of “liability dumping,” whereby oil and gas producers dodge responsibility for well cleanup by selling assets to smaller producers without the resources to manage them in the long term.

The proposed Goldboro LNG export facility in Nova Scotia — slated to become the East Coast's first such project — could get the axe by June 30. #LNG

Given that advocates have raised questions about Pieridae’s financial viability, Popowich said there’s a risk the wells could end up the responsibility of the underfunded Orphan Wells Association.

“If Pieridae has the cash in the bank, then it's a different story,” he said. “But they don't.”

Pieridae spokesperson James Millar said the company was impacted by COVID-19 in 2020, along with the rest of the industry, but has “a forecast improvement in 2021.”

“Pieridae has demonstrated that it is technically, operationally and financially able to satisfy all of its regulatory obligations now and into the future,” Millar added.

The Alberta Energy Regulator has taken the rare step of referring the licence transfer to a public hearing, the date for which has not yet been set.

Meanwhile, concerns are also being raised in Nova Scotia, where the $10-billion facility has been pitched as a source of jobs during the construction phase and permanent positions once complete.

Grassroots Mi’kmaw activists have raised concerns about the impact the “man camps” planned to house the 5,000 workers required for construction of the facility will have on Indigenous communities.

“Historically, man camps and big development projects have had a direct impact on violence against women,” said Margaret Cook, a Mi’kmaw grassroots organizer. In a province that already has the highest rate of human trafficking in the country, Cook questioned the safety of adding “5,000 more people to that mix who have no connection to our communities, our culture or people.”

While Pieridae has said it has consulted with Mi’kmaw organizations, Cook said there should have been consultation with grassroots women.

“We know the facts, how man camps have directly impacted other communities,” she said. That concern was also documented in the final report of the National Inquiry into Missing and Murdered Indigenous Women and Girls (MMIWG).

After Cook and other grassroots activists, as well as the Nova Scotia Native Women’s Association, spoke out against the project, the Assembly of Nova Scotia Mi’kmaw Chiefs issued a statement saying it shared those concerns and would participate in the planning process to ensure adequate protections are in place.

But Cook said such measures were little more than a “Band-Aid” and vowed to keep fighting the project, including by placing signs along the 200-kilometre route from her home community of Millbrook First Nation to the project’s proposed location on the province’s Atlantic coast.

Millar, the Pieridae spokesperson, said in an email that the company was working with Mi’kmaw communities on the development of the Lukowinuo’kuom Workforce Lodge, the name for the construction camp. Fifty-one per cent of the deal to build the camp has been awarded to Nova Scotia’s 13 Mi’kmaw bands, with the rest going to Calgary-based Black Diamond Group.

Millar also said Pieridae will provide its workforce with “Indigenous awareness training,” including sections on MMIWG as well as lodge safety and security protocols, adding the “Pieridae planning process is to work with the local communities to ensure the safety of local Indigenous women and girls.”

Apprehension about the proposed facility isn’t confined to Canada; in the United States, the Goldboro project has raised concerns among activists campaigning against a compressor station — a part of the pipeline system that helps move gas long distances — in Weymouth, Mass.

For more than half a decade, the community group Fore River Residents Against the Compressor Station (FRRACS) has been advocating against the construction and operation of a compressor station in a low-income urban area close to Boston, citing concerns for the health of individuals living in close proximity — in some cases, as little as as 500 feet — from the plant.

“It’s a place that is already overburdened with pollution from multiple sources, so this is just adding to the toxic flow,” said Alice Arena, president of FRRACS.

The compressor station is owned by Enbridge, the company responsible for a project called Access Northeast, which activists say would have sent fracked natural gas from Pennsylvania to Goldboro LNG via the Weymouth compressor. In 2017, Enbridge cancelled that project due to difficulties obtaining financing. But Arena and others don’t trust the project is gone for good.

“If it were to be announced tomorrow that Pieridae is dead, that's great, because then we're going to go after this compressor station even harder and say they have no reason to operate. If (Goldboro LNG) is approved to operate and it's built, then we're in trouble. Because we know that Access Northeast will come back with a vengeance.”

And with a deadline for the fate of the Goldboro facility approaching — the company has identified June 30 as the deadline for its final investment decision — activists across the continent will be watching closely.

So if they're as flush as

So if they're as flush as their ppl in Alberta say, why on earth would they need $30 bucks from every man, woman and child in the country?
Which begs the question as to which of their turnaround ppl heard a later report than I did? That one says we can't be wasting our grocery money on sure loss bets. Because climate change makes our groceries cost more ... and more carbon is just what we need to be dead last in climate "leadership". Well done JT.