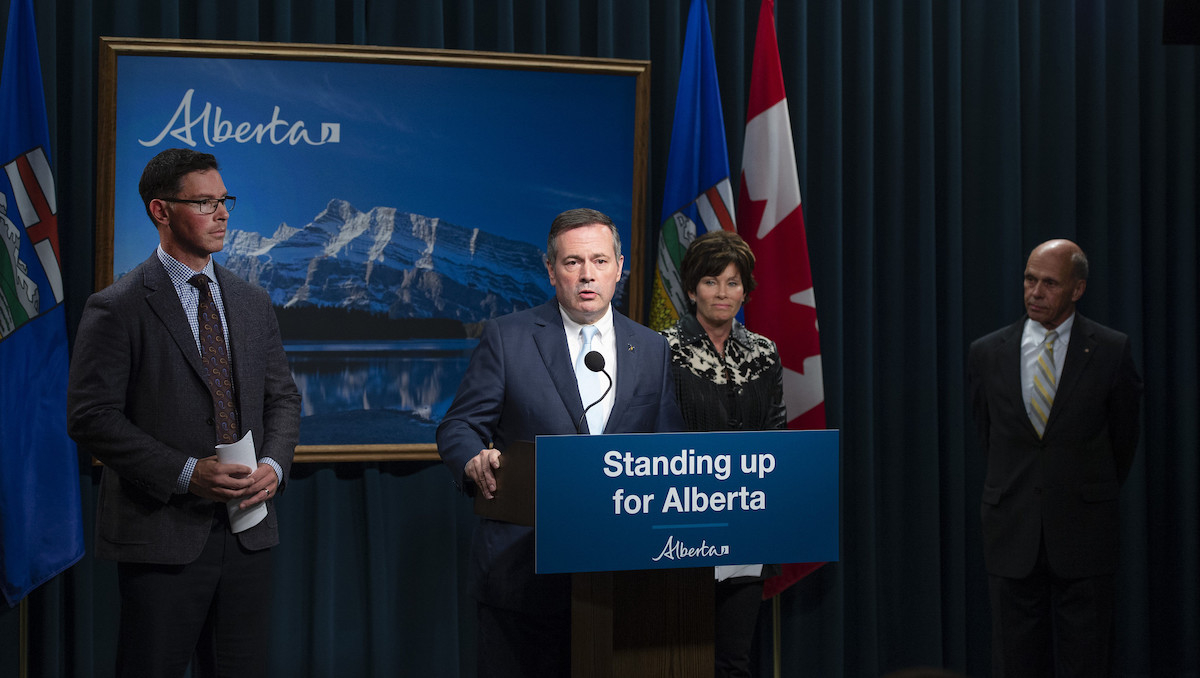 After two years, four extensions and $1 million in extra funding, the Kenney government’s public inquiry into anti-Alberta energy campaigns is finally getting somewhere. In a June 18 news release (a Friday afternoon, no less), the so-called “Allan Inquiry” announced formal legal notices had been sent to 40 organizations describing the inquiry’s view of their conduct and asking them to respond confidentially by mid-July. According to the content of those notices, the inquiry hopes to deliver its long-overdue report by the end of July.

Nobody should be expecting anything groundbreaking, though. Indeed, the notices betray just how weak commissioner Steve Allan’s hand is, and how unlikely it now seems that his report will fulfil the reckoning Jason Kenney repeatedly promised for environmental groups. Allan wrote: “Should I ultimately make a finding in respect of you, I will clearly declare that such a finding, if any, does not in any way suggest that the activities on which I might base a finding have been unlawful or dishonest, or that the conduct on which I might base a finding should in any way be impugned.”

I take this to mean that even if he finds something about the environmental organizations he was charged with investigating, he has no intention of suggesting their behaviour was in any way illegal or even wrong. To paraphrase T.S. Eliot, this is how the public inquiry into anti-Alberta energy campaigns ends: not with a bang but with a whimper.

For a government that has built its brand around its willingness to “fight back” against its perceived enemies, near and far, this has to be very disappointing. It’s the equivalent of a boxer refusing to come out for the final round, knowing there’s no way he can land a knockout punch, much less win the fight with the judges.

But Allan’s failure to deliver for his government shouldn’t diminish the seriousness of its behaviour. This was clearly an attempt to intimidate and threaten the oil and gas industry’s environmental critics, and it stands in stark contrast to the government’s supposed embrace of ESG (environment, sustainability, and governance) criteria. It has also consumed thousands of hours and many thousands of dollars for the environmental non-governmental organizations that have been placed under Allan’s lens.

It brings to mind the famous words of Edward R. Murrow, who bravely spoke out against a similar effort in the United States by Joseph McCarthy nearly 60 years ago. “The line between investigating and persecuting is a very fine one and the junior senator from Wisconsin has stepped over it repeatedly… we must not confuse dissent with disloyalty. We must remember always that accusation is not proof and that conviction depends upon evidence and due process of law.”

As a trained forensic accountant, Steve Allan is being careful not to assert wrongdoing or criminality in his forthcoming findings. But there’s an entire ecosystem affiliated with (and sometimes directly employed by) the Kenney administration that won’t be nearly as careful. They will weaponize his work, attack the organizations even after Allan states they have done nothing wrong and advance the false narrative that Alberta’s economic problems are a result of a small group of external actors rather than tectonic shifts in global markets.

They may live to regret that if a future government uses this precedent for their own political purposes. If Rachel Notley’s NDP is put back into power in 2023, it could easily strike its own public inquiry into foreign funding of conservative think tanks. It could start with the Atlas Network, which has received funding from the Koch Family Foundations, the Bradley Foundation and other leading right-wing American organizations, and lists groups like the Alberta Institute, the Canadian Constitution Foundation and the Canada Strong and Free Network (formerly the Manning Centre) as “partners” on its website.

By using the inquiry power to harass its political enemies rather than serve the public interest, the UCP has opened a Pandora’s box it may not be able to close. Then again, it may not want to. But for the rest of us, the fiasco and farce of the Allan Inquiry should serve as a reminder of why government-sanctioned investigations into the political speech of private citizens should not be tolerated.

The ability to speak truth to power may not always be popular, especially when the power in question is your own. But the alternative, as we caught a glimpse of with the UCP’s shambolic public inquiry, is far worse. And the fact that Albertans dodged an incompetently fired bullet won’t make the next one any less lethal in the hands of a more skilled marksman.

Max Fawcett: "If Rachel Notley’s NDP is put back into power in 2023, it could easily strike its own public inquiry into foreign funding of conservative think tanks."

Notley's NDP relentlessly attacked environmentalists and pipeline opponents. By the end of term, she had bought into Vivian Krause's conspiracy theories:
"'I’m frustrated by it, of course,' Notley says of the [anti-oilsands] campaign. 'Vivian Krause (the B.C. researcher) and people like her have done a good job of really laying bare the details of this and really showing us the degree to which this had been going on and building over time.'"

There is virtually no

There is virtually no difference between Jason Kenney and Rachel Notley on the carbon file, with the recent exception of coal.

The BC government and half the citizens of the South Coast were (and still are) opposed to the Trans Mountain expansion project, though the Supreme Court of Canada took all of a few days to quash BC's legal attempt to halt the project. The decision took a single narrow legal jurisdictional view (The feds have the sole authority to cross provincial boundaries. Period. ) and discarded the fact the BC owns the coastline and the seabed under all inland seas (i.e. the entire TM tanker route), the opposition of all coastal and more than half the inland Indigenous nations along the land and marine route, the kangaroo court antics of the NEB, the unsound economics behind the project, and a little something called climate change.

Around the same time Fort McMurray burnt up in a huge forest fire that followed an unusually long drought, no doubt a product of atmospheric warming. Everyone felt sympathy for Fort Mackers when hundreds of their homes were consumed. BC liquor stores and supermarkets had Fort Mac donation boxes at their checkouts that were spilling over. I made several $10 donations over a few weeks. The cumulative donations tallied in the millions.

But when the anti-TMX BC lawsuit hit the news, Fort Mackers were some of the most apoplectic pundits calling for the cutoff of oil to BC, claiming that we're knocking them when they're already down with tanked oil prices and the devastating fire. I was one of many who wrote never-published letters to Fort Mac media outlets asking for a refund.

No Albertan got a taste of Notley's smarmy condescension directed to municipal permit bureaucracies that tried to honestly process the TMX application, only to be played by bad-faith actors. The extensive documentation on the TMX personnel's duplicity submitted to the NEB shut the pro-oil Calgary Herald editorial board up on that topic. Meanwhile, Notley banned BC wines from entering Alberta. What a joke -- the sales of BC wines skyrocketed, mainly amongst British Columbians. Mountains of cases of Mission Hill and Hester Creek were selling faster than the deliveries could manage, and shortages developed.

I am realizing that the only viable way to change Alberta's policies and attitude is to watch its markets dry up. Joe Biden has started the ball rolling with the cancellation of Keystone (though there are other pipelines that can still take the volume) followed by a two trillion dollar budget with a heavy focus on fighting climate change. Investors are nibbling down the mountain of cheese and steadily leaving the scene. Electrification of the domestic North American car fleet is just ramping up (eastern Canada's auto sector will benefit to a degree), which will probably be the biggest punch in the face to the Alberta oil industry's dependence on a land transportation market. These things take time, but this ism evolving to be the make or break decade.

Kenney and Notley can play oil monopoly all they want, but they will never control anything beyond their borders. Not even BC wine.

I’m not sure that the

Right wing think tanks and dark money from the Kochtopus could well be the real culprits behind Alberta's mindless refusal to recognize the shifts in global markets, never mind the rising tide of evidence that fossil fuel energy is burning large, unrepairable holes in the ecospheres we depend on.

But perhaps it served as a useful distraction.....attacking foreign environmentalists while secretly negotiating with foreign mountain top removing coal companies from Australia.

If the NDP gains power, my suggestion for keeping the 'war room' alive...if that's what Albertan's get off on.....is a thorough examination of the money trail left behind by Gina Rinehart's Riversdale corporation....and other similar slime buckets of the global coal cartel.

To match these absurdities, I

To match these absurdities, I propose an enquiry into the "foreign" coal, oil and gas funders of the oil sands and gas projects over the last 50 years. On the other hand, they're all hiding in plain sight or divesting as quickly as they can. So let's use our limited dollars to go after the industry laggards who have refused to clean up their orphaned or abandoned wells, instituting retroactive and escalating fines if they don't. And re-train Albertan oil/gas workers to build the green energy future they deserve.