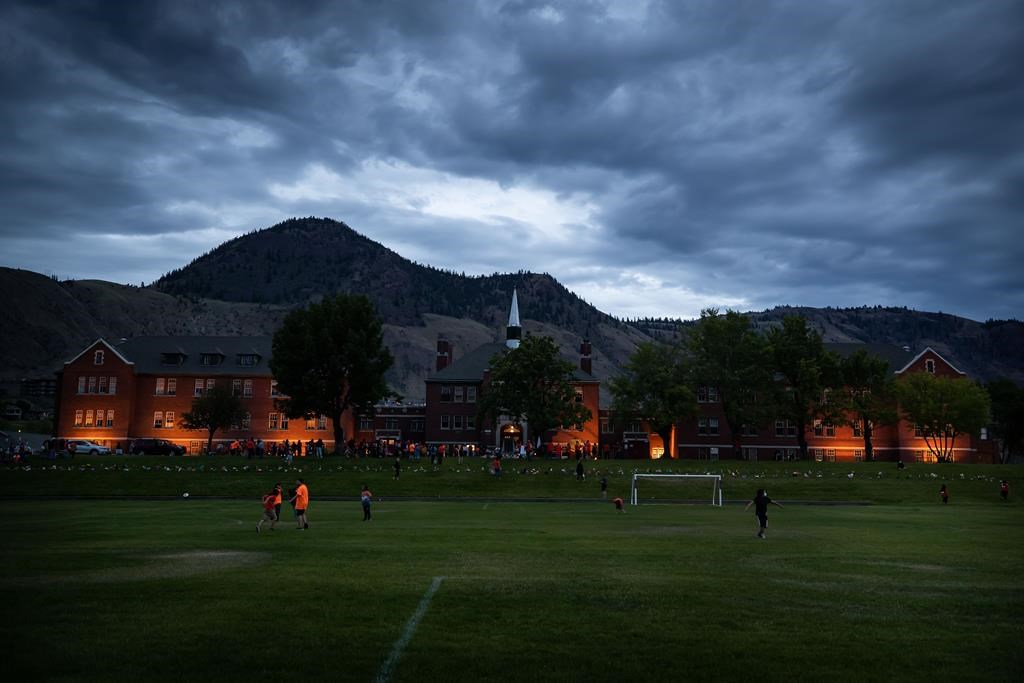 People gather outside the former Kamloops Indian Residential School to honour what are believed to be the remains of 215 children discovered buried at the site in Kamloops, B.C., on Monday, May 31, 2021. File photo by The Canadian Press/Darryl Dyck
Previous story
Next story

Front-line organizations working with Indigenous people say the need for in-person help has intensified in the past month since the Tk’emlúps te Secwépemc First Nation in Kamloops, B.C., announced ground-penetrating radar had found what are believed to be the remains of 215 children buried on the grounds of a one-time residential school in Kamloops.

Jason Mercredi, executive director of Prairie Harm Reduction in Saskatoon, said the disclosures are triggering “troublesome memories” for survivors. He said there has been an increase in visits to the safe consumption site from individuals looking for mental-health support.

“We can’t really keep up, and it’s tough because some of these folks have been successfully coping for a number of years,” said Mercredi, who is Denesuline and Métis.

Pandemic restrictions have limited the number of places offering face-to-face support, so workers have had to refer people to an outside support line, he said.

A national crisis line is available through the Indian Residential School Survivors Society and some groups are offering regional helplines.

Mercredi said the federal government should be funding First Nations, Inuit and Métis-led organizations and communities to ensure appropriate support is provided.

“Each community needs to have the ability to design its own response model and support model,” he said. “All these cultures are very different ... (and) they need to have the funding to be able to respond where they need to.”

Wilson, who is Nakota, Cree and Saulteaux, has taken calls from non-Indigenous agencies in the city as well as from the police force asking for guidance on how to support survivors who are retraumatized.

Some who returned home from residential schools are living with survivor’s guilt, she said.

“This is not a shock to most of us. It's just a deeper grief,” she said.

“A lot of survivors think they could have stopped what happened. You know, that's not the case, but they live with that every day.”

Wilson also believes there is a need for more culturally appropriate forms of support such as beading or sewing circles.

“We need more people to understand how our hands can help us more so than traditional western talk-through therapy.”

The National Association of Friendship Centres, which represents more than 100 such gathering places across the country, would like to see intergenerational support as well.

“Our youth are in this sea of information about crimes, violence, murders against their ancestors. They need help walking through that and figuring out what does that mean,” said Kelly Benning, a Métis woman and the association's vice-president.

The Indian Residential Schools Resolution Health Support Program has a hotline to help residential school survivors and their relatives suffering from trauma invoked by the recall of past abuse. The number is 1-866-925-4419.

This report by The Canadian Press was first published June 25, 2021.