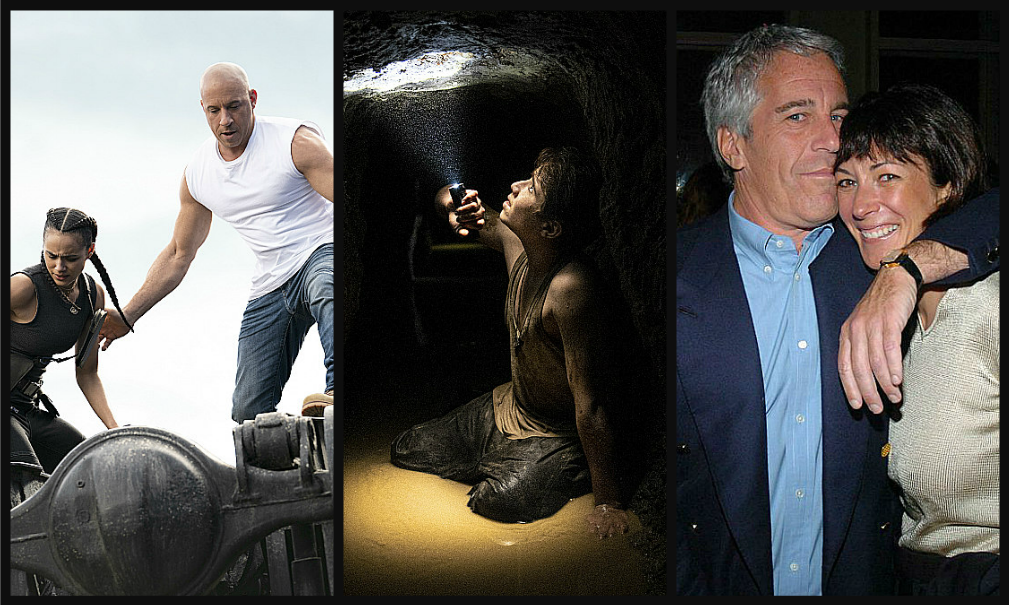 Maybe the movie theatres will finally revive this week. Numbers from the U.S. say only about 40 per cent of the people who usually attend have done so recently. They've got a big one to draw them this week. It leads my reviews today.

F9: THE FAST SAGA: All those months of waiting have added to the title. It used to just be called F9. They've also added a huge responsibility. The film now has the onus of bringing the crowds back into the theatres and saving the summer for the movie business. It could. The fans will likely be there, and may not mind the illogical story put in front of them and just go with the action. There are more cars burning rubber, crashing, rolling over, flipping and exploding here than I've ever seen in one film. One Pontiac even flies into outer space, but that's beyond illogical. Other stunts come close. Vin Diesel as Dominic Toretto drops from great heights onto moving vehicles without as much as a twisted ankle. Watch him drive across a suspension bridge that has collapsed, and you'll appreciate why these films have become monstrously successful. Thrills and more thrills, never mind what sense it makes.

Diesel's crew started out as just street racers 20 years ago, but from about the fifth film on, they've become something of a Mission Impossible team. They've been sent after drug dealers, spies, and this time, an international villain trying to get hold of the two halves of a super weapon that can disable all electronic devices. But this villain (John Cena) is Dom's own brother. Funny we haven't heard about him before in all these films because Dom is always talking about family. That's part of an excessively crowded story written by Justin Lin, who also returned as director. He brought back the main characters (played by Michelle Rodriguez, Jordana Brewster, Tyrese Gibson, Ludacris, and others), a couple back from what we thought was the dead, and Charlize Theron and Danish actor Thue Ersted Rasmussen as added villains. Helen Mirren, who asked to be in the series, gets to drive this time. She didn't last film, and she's as wild as the rest. There are flashes of fun, but much that's ludicrous tying them together. (Theatres all over.) 2½ out of 5

THE ICE ROAD: This one has a bit in common with F9. They're both fantasies that a boy playing with his toy vehicles may have dreamed up. Here they're semi-trailer trucks in northern Manitoba driven by Liam Neeson and others, skidding, sliding, rolling over and cracking through ice into water. This film is logical, though, well, except for the scene when the drivers manage to upright two flipped semis with just a winch. The rest is a gripping adventure that never stops and piles on the suspense. No surprise that. The writer-director is Jonathan Hensleigh, who has done this before. Think far back to Con Air and The Rock and then Jumanji and Die Hard With a Vengeance.

Three trucks are trying to get to a collapsed mine to rescue the men trapped inside. The ice road to get there is close to melting and dangerous to drive. The giant semis slide in S shapes (unlikely, but toy-like). The ice creaks. We even see the trucks from under it. Wheels break through. One truck goes under. All this while the trapped miners' oxygen is running out. And while friction develops between one of the other drivers (a young Indigenous woman played by Amber Midthunder) and an insurance man who insisted on coming along. A surprise twist mars the story, but the simple thrills are there. (PVOD release, anywhere you can rent or own digital films.) 3 out of 5

SUN CHILDREN: Another fine film from the Iranian master Majid Majidi, who you might remember made Children of Heaven years ago and got an Academy Award nomination for it. This one is not as simple and poetic, and much more into social criticism. Child labour, scarce education and inequality, especially for refugees from Afghanistan, are his targets. The film is a disguised censure of Iran's government, if you will.

Four boys, petty thieves when possible, are given an opportunity by a crime boss. Down in a drain pipe under a cemetery there's a “treasure.” Get it and you'll be rewarded. But you'll have to enrol at a nearby school and access through its basement. Twelve-year-old Ali is the leader, and much of the film shows him sneaking downstairs, breaking a lock and tunnelling. At the same time, the school is in danger of closing. It's funded as a charity and can't pay the rent. The sister of one of the boys is arrested for selling trinkets and one of the teachers helps get her released. The story elements seem conventional, but the social condemnation built into it, and the very natural performances by the youngsters, not professional actors at all, make this film special. (For rent to buy on the Apple TV/app/iTunes or platforms like Cineplex Store, Telus or Rogers.) 4 out of 5

EPSTEIN’S SHADOW: GHISLAINE MAXWELL: It's the sordid real-life story of the year. Jeffrey Epstein, fast-living financier, convicted as a sex offender, and British socialite Ghislaine Maxwell is accused of having lured teenage girls to him. Netflix has a documentary series telling his story and this series from HBO and Crave tells hers. Some of the same people are in both, but fewer “survivors” with graphic stories appear in this one. We do hear from several friends who knew Ghislaine back when, especially in university. What we don't get enough of, though, is what would drive her to do what she'll be tried in court for — finding sex slaves for him.

We do learn about her childhood; she's the daughter of late British newspaper baron Robert Maxwell. She desperately wanted his approval and later found a new “father figure” in Epstein and worked to please him. That analysis comes from a friend of hers and I really would have wanted more from an actual psychologist who might have diagnosed it as a folie à deux. Vocally and in film clips, we get her “impossibly fun” image. And a weird rumour: That both Robert Maxwell and Jeffrey Epstein may have been working for Israel's Mossad intelligence outfit. It offers no evidence though, or purpose, except that Maxwell got his long-held wish to be buried in Israel. No proof at all. Never mind. There's plenty else in this three-part series to engross you. (Crave) 3 out of 5

ENTANGLED: There's bound to be interest in this documentary on both the West Coast and East Coast of Canada. It's about a battle to save whales off the coast of Massachusetts, but the issues are very similar to the threats to whales off British Columbia. There, the big threat is from tanker traffic, soon to increase thanks to the expanding pipeline. In the East it's the lobster fishery. The North Atlantic right whales get tangled in the ropes that go down to the lobster traps on the ocean floor. A long battle has ensued between protesters and fishermen, people who say the whales are heading to extinction and the ones trying to preserve North America's most valuable fishery.

The film has experts, eyewitness stories (and film), arguments at public meetings, demonstrations and policy hearings in a lively documentary only 75 minutes long. It's crammed with information and debate, government action and repeal, and most valuably, a potential solution: Ropeless fishing. It's controversial, possibly expensive, but sure to come some day, the film says. Canada gets a few swipes, but they're not too clear to me. The director, David Abel, is a reporter at the Boston Globe who also makes documentaries. A previous one was about a U.S. versus Canada dispute over lobster fishing. (Cineplex International Village) 3½ out of 5

WOLFGANG: He's the original celebrity chef, and this documentary lets him tell his own story with two results. He comes off as warm and endearing (new to me, who never saw him on TV and only knew a bit about him as a luminary). And his story is dramatic. He's in what he describes as “overdrive” because of a stepfather back in Austria. The man belittled him, said he'd never amount to much, and Wolfgang Puck set out to prove him wrong. That has been driving him forever, starting with simple dishwashing jobs, to kitchen tasks in a hotel (where he was fired for not preparing enough mashed potatoes), and an hour of soul-searching that produced what sounds like a motto: “Giving up is not an option.”

He went to France to learn cooking, to Hollywood at age 24, and to a spectacular rise from another small job to starting his own restaurant, where he “blew up like a movie star.” What made his fame was the open kitchen he initiated at Spago, the help he got from the woman who discovered him, and he later married, and many TV guest spots. (Johnny Carson gave him the idea for frozen pizza, which he made into a valuable sideline.) There are clips from shows and comments from friends, but his own memories mark the film. And his philosophy: “Believe in yourself.” (Disney+) 3½ out of 5

SILENT NIGHT: There's grit and a low-class vibe in this British crime drama, which seems more suburban than downtown. It doesn't have the spunk of a Guy Ritchie film, more of a downbeat aura spun by writer/director Will Thorne. Still, it engages with a familiar “one last job” scenario, which seems contrived and realistic at the same time.

Bradley Taylor plays a south London hit man, just out of jail, labouring at a tree-trimming job and trying to reconnect with his young daughter. He'll be expected at her school nativity play, but, well, you know, things happen. His ex-cellmate (Cary Crankson) lures him into doing a quick job for a local gangster (Frank Harper). To protect his reputation, he wants them to kill three guys who messed with his wife. With the pal constantly spouting philosophy (“People at the top are getting away with murder.”), they get to work. There's also a woman (Jackie Howe) who runs a garage and serves as a secondary crime boss. The story is pretty standard, though, with mistakes made, a dark mood and double-crosses, but, ultimately, a serious revelation of a twist to jolt you. (Available now on VOD/digital platforms.) 2½ out of 5

Another Quiet Place, Kevin Hart not joking as a father and Pixar’s latest