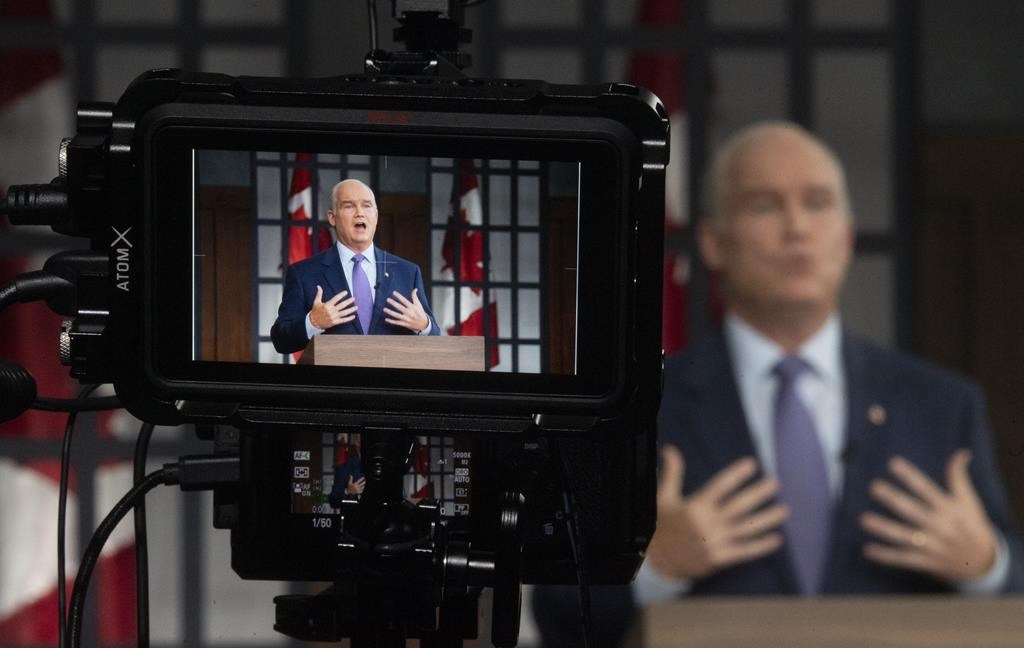 Leader of the Opposition Erin O'Toole is shown on a camera screen as he speaks during a news conference Monday May 31, 2021 in Ottawa. Photo by: The Canadian Press/Adrian Wyld
Previous story
Next story

OTTAWA — The Conservative Party of Canada is positioning itself as the defender of Canada Day, as more communities decide to skip celebrations out of respect for First Nations discovering unmarked burial sites at former residential schools.

Leaders in different cities and towns from across the country have called into question the appropriateness of holding fireworks and festivities on July 1 since the findings were first reported.

The most recent include the northern Manitoba town of Churchill and two Saskatchewan communities.

Cowessess First Nation east of Regina announced last week that ground- penetrating radar detected 751 unmarked graves at the former Marieval Indian Residential School. The news followed the discovery of what are believed to be the remains of 215 children at another former site in Kamloops, B.C.

Hours before the Federation of Sovereign Indigenous Nations announced last Wednesday that the Cowessess First Nation had discovered a grave site, Conservative Leader Erin O'Toole told his caucus in a speech that he can't stay silent when there are calls to cancel Canada Day.

He said reconciliation is not about tearing Canada down, and no country could stand up to close scrutiny of its legacy, but whatever pain felt from the wrongs committed in Canada should be used as motivation to build a better future.

On Saturday, the party put a question out on social media: "Who is asking Canadians whether they want Canada Day to be cancelled?"

O'Toole's remarks echo his position as the "true blue" candidate in last summer's race to lead the party, where he campaigned against "cancel culture" and removing statues from Canada's historical past.

After the discovery at Cowessess, Alberta Member of Parliament Michelle Rempel Garner took to social media late Friday to respond to an article headlined, "Indigenous people call on Calgary to scale back or cancel Canada Day celebrations."

"And we should listen," she wrote on Twitter, saying "political cost be damned."

She expanded on her thoughts with a Facebook post in which she said some may feel changing how Canada Day is marked could be detrimental to the country, but including thoughts for deceased Indigenous children and what needs to happen next "into a day on which we traditionally give gratitude for the good that exists in our nation is only right and just."

"We should be proud and grateful for the good that exists in our nation. But we cannot use that celebration as an excuse to continue to blind ourselves to a truth we have never adequately confronted, or allow it to exacerbate the pain of injustice; we must listen to Indigenous voices and act," Rempel Garner said in the post.

In an interview with Global's "The West Block" aired on Sunday, O'Toole also suggested he may be the only federal leader who's proud of Canada that's running to be the next prime minister in a general election many speculate may happen this year.

The leader also said in the interview that it appears Trudeau and some of his Liberal cabinet ministers "almost want to cancel Canada Day because we failed in the past," after those politicians stated July 1 should be a time of reflection.

Federal Indigenous Services Minister Marc Miller on Sunday tweeted, "It is one thing to reflect on celebration of Canada Day and quite another to turn Canada Day into a rallying cry designed to whip up a political base, particularly at a time when Indigenous Peoples are hurting."

A request for comment from O'Toole's office has yet to be returned, as have asks to hear from Saskatchewan Conservative MPs Cathay Wagantall and Gary Vidal, the party's critic for Indigenous services.

Both of their ridings include communities that have decided against holding July 1 celebrations.

Canada Day should not be cancelled, says O'Toole