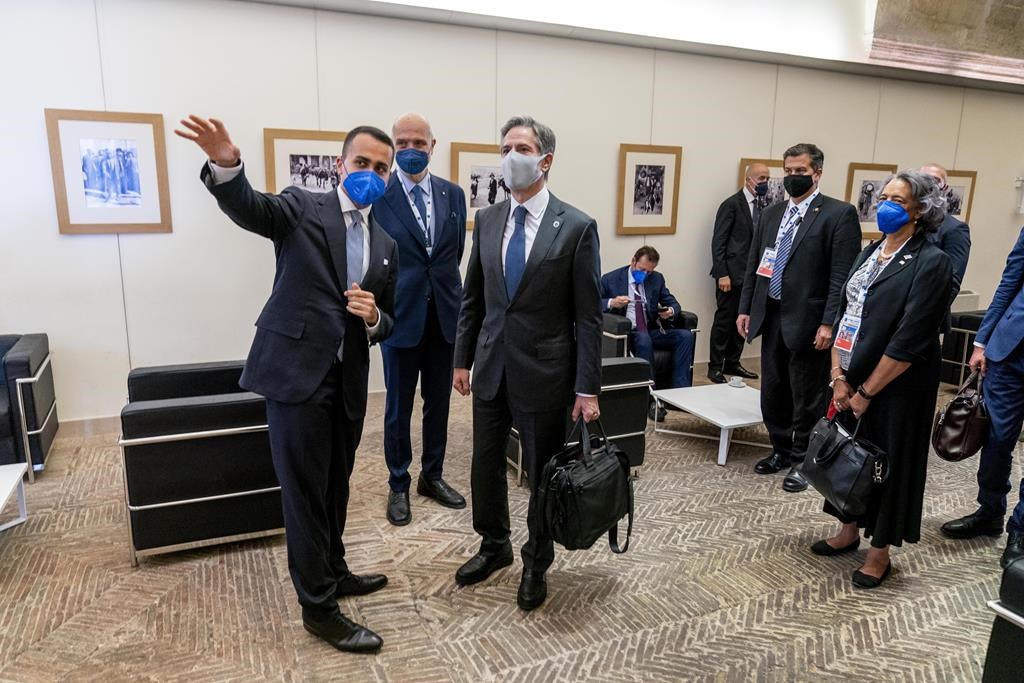 With the pandemic providing painful lessons on how interconnected the world is, ministers from nations accounting for more than half the world’s population were meeting in Italy on Tuesday to explore how to better cooperate, including on vaccines and climate change efforts.

Italian Foreign Minister Luigi Di Maio cited both as areas where it’s imperative that countries pull together. He opened the appointment, attended by foreign ministers and development ministers from the Group of 20. Together the G-20 nations account for some 80% of the world's GDP.

Some ministers were participating remotely because of COVID-19 travel concerns, including from China, Russia and Brazil.

“In an interconnected world, multilateralism and international cooperation are the only effective instruments in facing global challenges," Di Maio said. “We have had an example of that with the vaccines.”

“To bring the pandemic to an end, we must get more vaccine to more places,” Blinken said. “Multilateral cooperation will be key to stop this global health crisis.”

Blinken took the occasion to tout U.S. contributions to COVAX, the U.N.-backed program to get vaccines to needy nations, which include around 500 million Pfizer doses and 80 million other doses.

While some wealthier countries are struggling to convince ever more segments of their populations to be vaccinated against the illness that has claimed nearly 4 million lives worldwide in confirmed death tallies, poorer nations, especially in Africa, are desperate to receive vaccine supplies, with only a tiny fraction of their people having access so far to the injections.

Scientists and many political leaders have warned that the pandemic can't be effectively brought under control unless all nations have substantial vaccination rates.

One of the sessions on Tuesday focuses on Africa.

For Di Maio, “2021 is a crucial year to relaunch international cooperation,” on climate change. “We have occasions we cannot lose to implement the Paris accords.”

#Pandemic points to need to work together as #Italy hosts #G20. #COVID19 #ClimateChange

The decision earlier this year by U.S. President Joe Biden's administration to return to the climate change fight and help lead it has heartened advocates pressing for urgent tackling of climate change threats. Last year, under the then Trump administration, the United States became the only country to leave the 2015 agreement.

The G-20 ministers will also discuss sustainable development and trade.

Italy hopes the meeting will help promote more sustainable and resilient recovery as the world emerges from the global COVID-19 crisis.

Reflecting that, for the first time since 1999, when the grouping was formed, development ministers were invited by Italy to join ministers of foreign affairs in a joint session.

The southern Italian city chosen to the meeting could be an inspiring symbol for development.

For decades, visually stunning Matera, a provincial capital of Basilicata, one of Italy’s poorest regions, had been synonymous with southern European poverty and underdevelopment.

Matera’s famous "Sassi" — literally stones — were dwellings carved out of natural caves of tuff. In recent years, the “Sassi” have been increasingly converted into boutique hotels, restaurants and getaway homes for the affluent, eager to be inspired by dramatic views from the city, which towers over a torrent.