B.C. lifts most COVID restrictions as vaccines work their magic 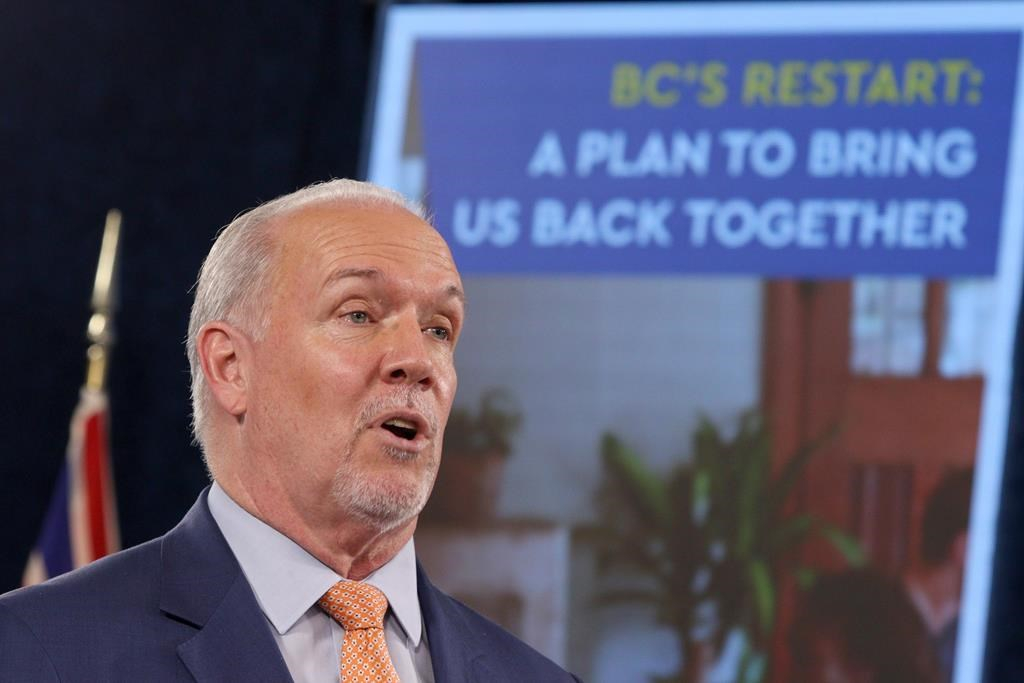 Premier John Horgan talks about B.C.'s plan to restart the province during a news conference at the legislature in Victoria on May 25, 2021. File photo by The Canadian Press/Chad Hipolito
Previous story
Next story

British Columbia will move toward a return to normal life on Canada Day as the province removes most COVID-19 restrictions and allows outdoor gatherings of up to 5,000 people.

Premier John Horgan said high vaccination rates and a low number of cases and deaths compared with other jurisdictions including Ontario and Quebec mean the province has achieved "extraordinary results" through its public health response and the efforts of residents who followed protocols.

"I am so proud, so proud to be a British Columbian based on how all of us have responded over the past 16 months," Horgan said Tuesday at the final regular government update on COVID-19 was held since they began in January 2020.

As of Thursday, restaurants and pubs will no longer have limits on the number of diners, but people will still not be allowed to mingle with those at other tables, masks will no longer be mandatory and recreational travel outside the province can resume.

"We welcome Canadians back to B.C., provided you've had those two vaccinations, provided that you check before you arrive to make sure that there aren't local restrictions in place, to ensure that Indigenous communities have a clear understanding about how many people are coming to their territory and what the consequences will be," Horgan said.

Casinos and nightclubs will open this week for the first time in 16 months, but some barriers will be in place and socializing between tables will not be allowed.

Provincial health officer Dr. Bonnie Henry said some businesses may want people to continue wearing masks for now, and everyone should comply with those requirements or face the potential of fines. Overall, the transition among individuals and businesses will depend on their level of comfort, she said.

"Not everybody's ready for a handshake right now. We've never been through something like this before, as a collective, as a society, so we need to be patient. It may be fist bumps and elbow bumps for a while yet for many people."

All COVID-19 restrictions are expected to be removed on Labour Day. Henry said public health officials will continue monitoring any clusters of COVID-19 as part of their usual surveillance of communicable diseases like the flu and keep the public informed about transmission of the virus.

British Columbia will move toward a return to normal life on #CanadaDay as the province removes most #COVID19 restrictions and allows outdoor gatherings of up to 5,000 people. #BCPoli

"I don't expect it's going to spread widely because so many people have been immunized, but it will likely affect businesses or a school or a long-term care home or a certain community, and we need to be able to manage that. And that may mean going back to certain things like staying home for a period of time or wearing masks in certain situations come the fall."

A total of 77 per cent of B.C. residents aged 12 and over have received their first dose of a vaccine and nearly 30 per cent of people in that group have been fully vaccinated, Henry said.

While a study commissioned by the Royal Society of Canada suggests deaths from COVID-19 in Canada could be twice as high as reported, Henry said it doesn't apply to B.C. and should be taken "with a grain of salt."

"We have an ongoing surveillance system where we do look at total deaths and deaths by cause here in British Columbia, and we've presented that a number of times, and very early on in the pandemic," she said.

The arrangement with the coroners service has meant any sudden deaths were tested for COVID-19, she added.

"I don't agree with what that report has come up with and I think there are variations, that they have made assumptions with what happened in Ontario, for example, and what happened here."