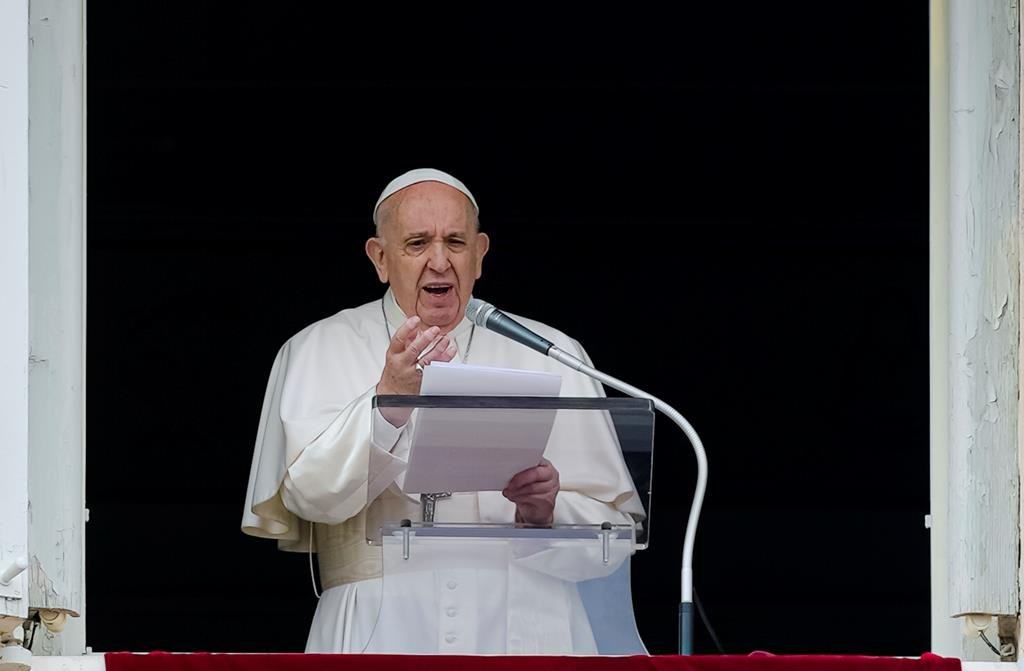 Pope Francis speaks from the window of his studio overlooking St. Peter's Square at The Vatican to a crowd of faithful and pilgrims gathered for the Sunday Angelus noon prayer, on June 6, 2021. File photo by The Associated Press/Domenico Stinellis
Previous story
Next story

Indigenous leaders will visit the Vatican later this year to press for a papal apology for the Catholic Church's role in residential schools.

The Canadian Conference of Catholic Bishops said Indigenous leaders will visit the Vatican between Dec. 17 and 20 to meet with Pope Francis and "foster meaningful encounters of dialogue and healing."

Manitoba Métis Federation President David Chartrand said he will be leading a delegation of Métis leaders during a private one-hour session with the pope to ask him to come to Canada to express his apologies and his sorrow for what took place in residential schools and to begin the healing process.

"It will have a greater sense of power and truth to his feelings and his pathway to healing if he comes into the soils of Canada, and stands here on our lands," Chartrand said in an interview with The Canadian Press.

Patricia D'Souza, director of communications for the Inuit Tapiriit Kanatami, said her organization is involved in arranging a visit to the Vatican and discussions are ongoing.

Chartrand said the Vatican respected the nation-to-nation relationship with Indigenous Peoples and that's why there will be separate one-hour sessions with Pope Francis for each of the First Nations, Métis and Inuit delegations.

He said other delegations will be travelling from Canada to the Vatican to attend a meeting with Pope Francis on Dec. 20.

"'He will speak to the public, probably in St. Peter's … where he'll meet the entire Canadian delegation that will be coming."

Chartrand said the long-awaited apology is still important despite being too late.

"In our culture, Indigenous culture, it means a lot to us that somebody finally acknowledges that they did wrong and they need to fix that wrong," he said. "I don't care how long it takes, the healing will start there."

#Indigenous leaders will visit the #Vatican later this year to press for a papal apology for the Catholic Church's role in #ResidentialSchools. #PopeFrancis

The Canadian Conference of Catholic Bishops said Pope Francis extended the invitation and is deeply committed to hearing directly from Indigenous people.

The bishops said in a statement he wants to express his heartfelt closeness, address the impact of colonization and the role of the church in the residential school system, in the hopes of responding to the suffering of Indigenous Peoples and the ongoing effects of intergenerational trauma.

The bishops did not say whether the Pope will offer an apology.

Indigenous Services Minister Marc Miller told a virtual news conference Tuesday that any act of healing requires an apology, “a full recognition of harm done,” which hasn’t been delivered by the Catholic Church.

He said the Liberal government will continue to advocate for a papal apology to Indigenous Peoples.

Miller said the country has “seen some righteous disgust with the immobilization of the Catholic Church on this matter."

Prime Minister Justin Trudeau visited the Vatican in 2017 and personally asked Pope Francis to apologize for the church's role in residential schools.

On Friday, Trudeau reiterated his call for the pope to come to Canada and apologize on behalf of the Catholic Church.

Trudeau made the comments after Cowessess First Nation in Saskatchewan announced it had located 751 unmarked graves at the site of the former Marieval Residential School, a few weeks after what are believed to be 215 bodies of Indigenous children were found in British Columbia.

Some 150,000 First Nations, Métis and Inuit children were forcibly sent to residential schools, where many suffered abuse and even death.

The findings in Kamloops and Cowessess have sparked national outrage and grief, and has led to mounting calls for the federal government and church to investigate more potential school burial sites.

In April 2009, Pope Benedict XVI invited members of a Canadian delegation composed of representatives of Indigenous communities and of Catholic dioceses and religious communities, for a private meeting to discuss their experiences with the residential schools.

Following the meeting, the pope expressed his sorrow at the anguish caused by the deplorable conduct of some members of the church and offered his sympathy and prayerful solidarity, but didn't give an apology.

In July 2015, Pope Francis apologized for the “grave sins” of colonialism against Indigenous Peoples of America in a speech in Bolivia.

This report was first published by The Canadian Press on June 29, 2021.

The pope might classify destroying the earth as a sin