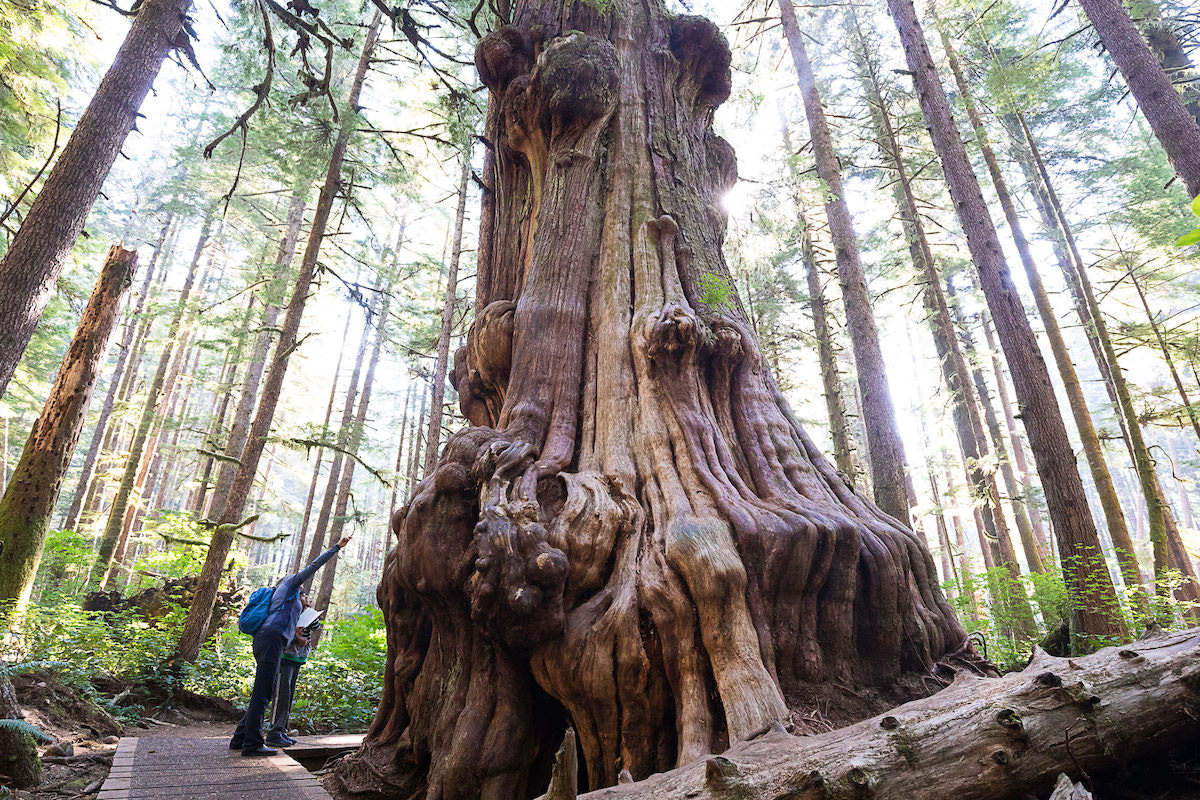 Ancient forests at the centre of a dispute around old-growth logging in B.C. are worth more standing in terms of tourism and ecosystem services, a new study finds. Photo by TJ Watt
Previous story
Next story

A new economic study shows ancient trees in the contentious Fairy Creek region on southern Vancouver Island are worth considerably more standing to nearby communities than if they were cut down.

And it confirms investments and efforts by the former forestry hub of Port Renfrew to rebrand itself as an ecotourism hot spot are right on track, business leaders say.

Protecting all the old-growth forests in the study area near Port Renfrew could result in an additional $40 million in net economic benefits over the next 100 years compared to logging as usual, said Andrea Inness of the Ancient Forest Alliance, which commissioned the independent research.

“The findings are significant because they tell us that old-growth forests are not being managed in the broader public's best interest,” Inness said.

“We need to see the province start making decisions around old-growth management that are in the best interest of all British Columbians — and not just the forest sector.”

As only a portion of harvestable forests near Port Renfrew were analyzed, the study actually underestimates the overall value of standing old-growth, she said.

Ancient forests in the Port Renfrew region have been at the centre of old-growth logging blockades by Rainforest Flying Squad (RFS) activists since August.

Both the Pacheedaht and Ditidaht have asked the protesters to leave the region so they can develop a regional integrated resource management plan, but protesters have remained, with close to 350 people arrested as of Monday.

“With much existing and potential tourism value to be gained from #OldGrowth, it makes economic sense to keep what’s left standing,” says Walt Judas, CEO of the Tourism Industry Association of BC @TIABC_CA. #FairyCreek #BCpoli

And the NDP government is under increasing public pressure at home and abroad to take more action to protect remaining at-risk, old-growth forests throughout the province.

The new study reflects the economic changes that Port Renfrew is experiencing on the ground, said Karl Ablack, president of the Port Renfrew Chamber of Commerce.

If all old-growth forests examined were protected, tourism itself would nearly make up for losses associated with timber extraction by adding an equivalent number of jobs and covering 66 per cent of the losses to GDP, the study said.

The economy of Port Renfrew, formerly a thriving resource community until the 1970s and ’80s, stalled with severe declines in forestry and the commercial fishing industry, Ablack said.

But the small community has revived itself over the last 20 to 25 years, first as a result of recreational fishing, and has since diversified into other ecotourism activities, including big tree tourism, he said.

In 2016, the community’s chamber put forth a resolution to the BC Chamber to support the protection of old-growth forests in areas where these forests had greater tourism value left standing. The resolution was unanimously adopted, noted Ablack.

Selling itself as the Tall Tree Capital of Canada, people flock from around the globe to visit the gnarly giants in the now-protected Avatar Grove, or Big Lonely Doug, a massive Douglas fir that stands alone in a clear-cut.

A strict visitor count has yet to be done, but approximately 5,000 cars a day travel to Port Renfrew during the height of summer via the Pacific Marine Circle Route — a loop on southern Vancouver Island featuring the region’s wild beaches and majestic forests, Ablack said.

“And there are days at Avatar Grove or at Lonely Doug where you can have 200 cars lined up on the side of the road,” he said.

“The numbers in the recent study have been very important to help quantify some of that data.”

Tourism is a core industry across the province, and virtually every community relies on revenue and employment generated from visitors, especially as pandemic travel restrictions ease, said Walt Judas, CEO of the Tourism Industry Association of BC (TIABC), in a statement.

International tourists in particular are keen to experience B.C.’s natural beauty not found anywhere else, he said.

“With much existing and potential tourism value to be gained from old-growth, it makes economic sense to keep what’s left standing,” Judas added.

Beyond a focus on tourism revenue, traditional economic analyses typically don’t tally up the valuable ecosystem services old-growth forests provide for free, and which are increasingly important as climate change intensifies, Inness said.

“If you only consider short-term job creation, revenues and impacts to GDP, the economics aren't telling the whole story,” Inness said, adding old rainforests store large amounts of carbon above and below ground and release carbon slowly as they decay.

And harvesting ancient groves sends more carbon into the atmosphere than can be compensated for by tree-planting or creating secondary wood products, she said.

Carbon storage is the biggest economic benefit to justify leaving old-growth standing and to reduce the massive financial burdens climate change is having, she added.

If old-growth in the study region was left alone, forest carbon emissions would be reduced by 569,250 tonnes, she said.

Though the Pacheedahts recently asserted their right to determine how forest resources should be used in their territory, the nation is also heavily invested in ecotourism — owning a gas station, general store, and a resort, as well as recently securing $1 million in COVID-19 relief funding to expand and upgrade its campsite.

Mike Hicks, director for the Juan de Fuca Electoral Area, which includes Port Renfrew, said logging will likely remain part of the region’s economy no matter what decisions are eventually made around old-growth.

Even if some old-growth logging continues, Hicks believes Port Renfrew's economy is diversified enough to weather any limited damage to the community’s brand.

And now with the availability of satellite internet services and the province's recent commitment to extend cell service along Highway 14 between Sooke and Port Renfrew, the town has everything it needs to consolidate its reputation as a destination location, Hicks said.

“There is no stopping Port Renfrew,” Hicks said.

“It’s not going to live or die on old-growth logging because it’s got so much going for it.”

But keeping old-growth in the region has greater inherent value economically, Ablack said, adding second- or third-growth logging is likely to continue.

“Do I see logging going away? Absolutely not,” Ablack said.

“Do we need to redirect it to better serve sustainability? Certainly, we can look at that.”

[Editor's Note: This story was updated Friday, July 2 to clarify the study examined harvestable old-growth in the provincial timber supply area within 35 kilometres of Port Renfrew – not all harvestable forests in that radius.]

Could be worth more? Why is

Could be worth more? Why is this still a question?

A living tree is more valuable than a mountain of toothpicks, and yet to assign it value do we still have to first reduce it to something we can count, like toothpicks? Ask the toothpick manufacturers and they'll say yes because the economic system that rewards them either completely ignores or externalizes almost all of the value of that living tree.

In a situation where our knowledge is incomplete, shouldn't the onus be reversed?

Yes, well, welcome to capitalism, a system explicitly dedicated to the price of everything and the value of nothing.

It bears noting that most of

It bears noting that most of the second-and-third growth plantations were virgin forest in my lifetime.
I expect that if we returned to mixed native species -- possibly of climate regions warmer than ours were in the early 50s. I put that as a reasonable era, given that by 1990 or 1991, the climate had already changed significantly in northern BC.
Between WW2 and some time in the early 90s, the snow that used to come to stay the last week in October or the first in November was but a Vancouver-like drizzle for all the first half of December. There were wildflowers growing in the woods and meadows that hadn't been there in the 60s.
The hill lines around the town were logged off, and the river we crossed every day beween home and school was dug out to be a uniform trench. And then they wonder why it flooded. With increasing regularity. And despite the dykes built all along the river.

It's not something folks talk about much, but with all those trees gone, the amount of oxygen in the air for us to breathe is also less. And quite aside from being a carbon sink, the temperature in the bush/forest/woods, whatever you choose to call it, is *always* moderated by the trees, regardless of the temperature out in the open.

The moisture they release through their leaves into the air makes the clouds that come at the right time of the year, too ...