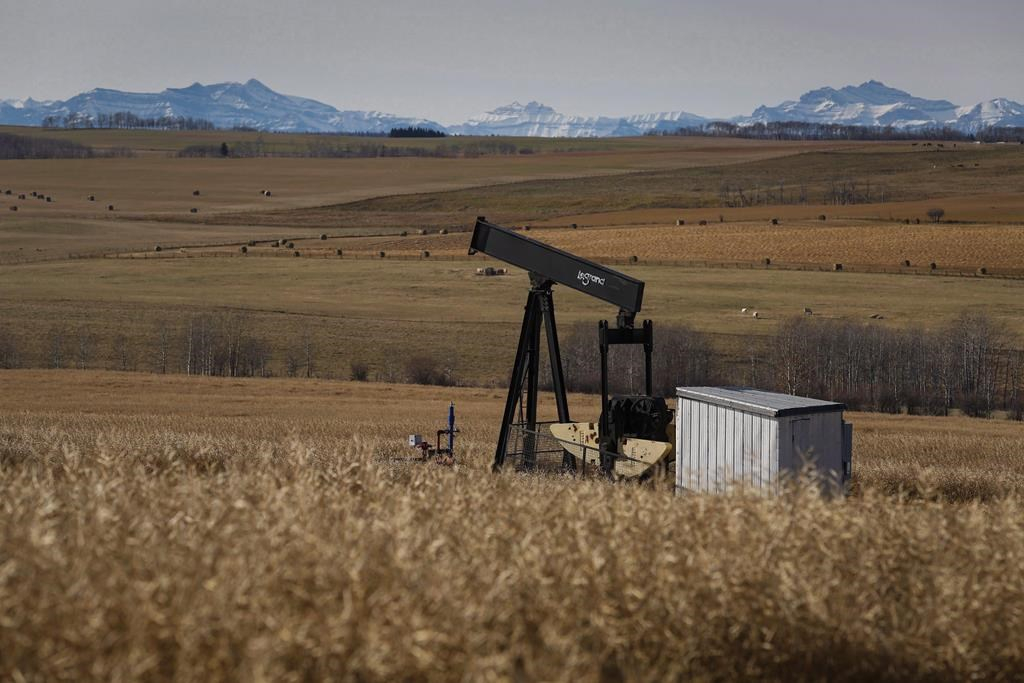 A de-commissioned pumpjack is shown at a well head on an oil and gas installation near Cremona, Alta., on Saturday, Oct. 29, 2016. File photo by The Canadian Press/Jeff McIntosh
Previous story
Next story

Most of Alberta's energy wells no longer hold enough oil and gas to pay for their cleanup and the public should take them over to ensure their remaining revenue funds remediation, a new report concludes.

"It is a radical idea," said Regan Boychuk of the Alberta Liabilities Disclosure Project, which produced the report. "It is something akin to nationalization."

Using data from the Alberta Energy Regulator released under Freedom of Information legislation, the report estimates the overall cleanup cost for the province's 300,000 unreclaimed wells at somewhere between $40 billion and $70 billion — a figure that doesn't include infrastructure such as pipelines or pumping stations.

The Disclosure Project, which has followed the issue for years and has advised academics and government, concludes there may not be enough value left in the ground to fund the work.

Still, those companies retain wells that pump and generate revenue. The report suggests the creation of an agency that would step in on insolvent companies, operate whatever wells remain and use the proceeds to fund remediation.

Boychuk points to the example of Trident Exploration, which collapsed in 2019 leaving more than 4,000 unreclaimed wells. He said those wells were still pumping the equivalent of 10,000 barrels of oil a day.

Instead of being sold to pay creditors, the report says a reclamation trust could have taken over those wells and used the revenue to clean up the sites and create reclamation jobs.

"A reclamation trust would make lemonade out of lemons like Trident," Boychuk said.

Such an agency could create as many as 10,000 jobs across the province, using skills Albertans already possess, he said.

Instead, Boychuk said, the public is paying. Between government grants to fund reclamation, unpaid taxes and outstanding lease payments to landowners, the report says Canadians subsidize energy cleanup to the tune of $4.3 million a day.

"Polluting companies must pay for their own cleanup," Boychuk said. "It's the law."

Richard Wong, operations manager for the Canadian Association of Petroleum Producers, suggested the report's analysis is too pessimistic. He said capital investment in oil and gas is expected to increase during 2021 -- "a signal that the industry is on the road to recovery," he wrote in a statement.

"Accelerating the decommissioning and reclamation of inactive wells and associated sites remains a priority for our industry. We continue to work with the Alberta government to advance policies and regulations which ensure substantial progress."

Thomas Schneider, a professor of accounting and finance at Ryerson University who advised on the report, said Alberta needs to do something as liabilities mount and the resource dwindles.

"In Alberta today, the regulator only collects a deposit from a company when it's deemed to be insolvent. This is absurd. We need to collect cleanup costs before a company becomes insolvent."

He said oil and gas companies should have to report all their cleanup liabilities.

In an email, Energy Minister Sonya Savage said the government has already moved to ensure wells get reclaimed.

She said companies now face a tighter evaluation of their ability to meet environmental obligations when they buy wells. The role of an industry-funded group that looks after wells for which no owner exists has been expanded.

As well, the government is introducing a new program to encourage producers to require companies to spend a certain percentage of their environmental liabilities on well cleanup each year.

Savage has said that figure could be four per cent. It remains unclear how the program would be administered or enforced.

"The report ... falls short on a number of points and completely fails to reflect the significant progress made by Alberta's government on addressing a number of issues it identifies," Savage wrote.

She said the reclamation trust suggested in the report would expose Alberta taxpayers to unnecessary risk.

"Implementing a public reclamation trust would create a significant risk with Alberta taxpayers having to assume the cost of liabilities."