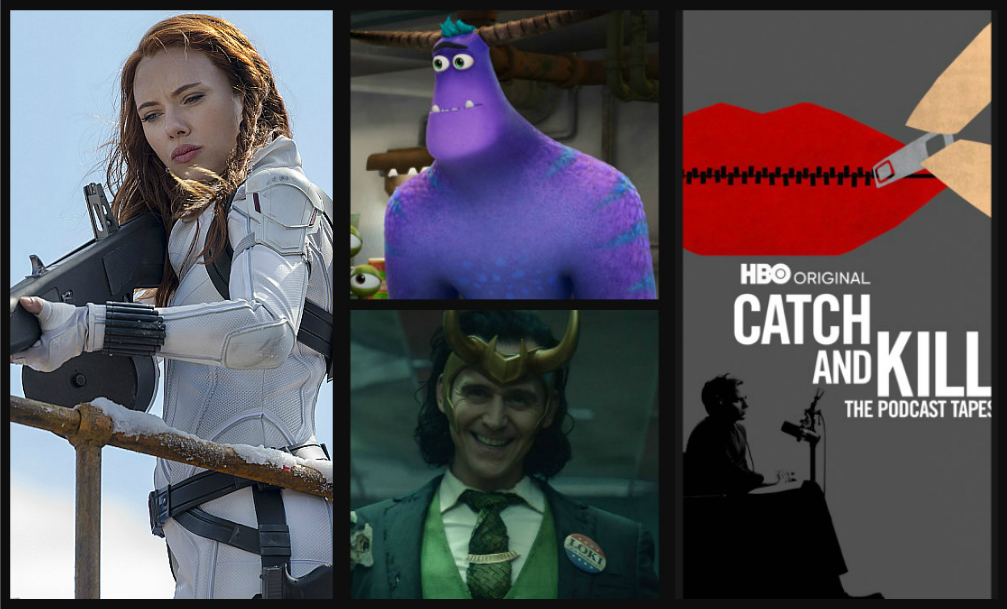 If you're in B.C. and ready to go sit in a theatre again, this week would be good. A fine Black Widow is out there to see on the big screen. You even have a new theatre to see it in: Brentwood in Burnaby is now open. You have to be 19 years or older, though, and the film is in three of its five auditoriums. F9 is in the others.

Let me put in a plus, though, for Antigone, a much-praised Canadian film that's both intelligent and entertaining. It was our submission to the Academy Awards this year and was named best Canadian film at the Toronto Film Festival. It adapts the ancient Greek play into an indictment of our immigration system through the tale of a Muslim new to Montreal. It's film art and now streaming from VIFF Connect.

Other new choices are:

BLACK WIDOW: Now the summer has officially started. Marvel Studios says so. What's summer without one of their blockbusters, and this is their first in two years. They filled their time with three TV series while the pandemic held the film back. Now the fans can scour over every detail and figure out its place, which is this: the first, maybe only, standalone film about Natasha Romanoff, a.k.a. Black Widow, starring Scarlett Johansson, after seven in which she was a secondary character. More specifically: set between No. 5 and No. 6 when the Avengers, of which she was a part, temporarily broke up. In that downtime Natasha explores her personal history.

She was part of a sleeper cell the Russians planted in the U.S. and was later trained as an assassin by them. She thinks she killed her teacher, Dreykov (Ray Winstone), but when her purported sister (Florence Pugh) tells her he's still alive, they go to find him and try to shut down his Red Room school where he trains young girls he calls "widows." That means this is hardly a superhero movie at all. It's a Cold War spy thriller or a Mission Impossible. And it gives us characters. Natasha is ashamed of her past, her sister is new to much of this world and full of energy, their pretend father (David Harbour) boasts about the super soldier he used to be and how he once fought Captain America. There's action, of course, plenty of it, well choreographed by Australian director Cate Shortland. This is one of the better Marvel movies because it delivers the goods differently from the usual. (In theatres and also available for $30 on Disney+) 3 ½ out of 5

LOKI: This is one of those series Marvel whiled away the downtime with, and it just played its fifth episode this week and concludes with its last on Wednesday. It's been a satisfying trip so far, dense with story, imagination and puzzles. I'm hoping the sixth episode will finally answer the questions that have been floating around all this time. They've been getting thicker and more elusive as the story progressed.

Loki (Tom Hiddleston) has been accused of violations of "the sacred timeline" by agents of The Time Variance Authority, which was set up by the "time keepers" to maintain order and avoid chaos. But who are they? Loki says they're not real and all the agents are being used, but by whom?

Owen Wilson, as an investigator, interrogates Loki, Gugu Mbatha-Raw plays a judge and Sophia Di Martino plays a variant of Loki. There are many of those, including eventually a young king, Stephen E. Grant, as a "classic" and even an alligator. It all makes sense in the fanciful storyline this series gleefully advances. The quest is to take down the TVA, expose the time keepers as fakes and let Loki clean up his reputation. It's been fun, but for best results, start from the beginning. (Available on Disney+) 3 ½ out of 5

MONSTERS AT WORK: I wasn't a fan of the Pixar movie Monsters Inc. 20 years ago but warmed up some for the sequel Monsters University eight years ago. Now there's a TV sequel to that, a 10-part series, and judging from the first two, it's good and funny. Billy Crystal and John Goodman are back in their same roles as Mike and Sully, and Henry Winkler, Bonnie Hunt, Jennifer Tilly and Mindy Kaling are some of the other voices.

Ben Feldman, as an animal-like character named Tylor Tuskman, wants to become a "scarer" like the monsters in the first film. They scared children and harvested teir screams as energy. But that's been replaced because it was found that laughter produces more energy. "Laugh power instead of scare power" is the new slogan. Tylor is relegated to a low and mysterious department but dreams of moving up. So he joins a class where Billy Crystal's character teaches comedy theory. Many of the jokes are a send-up of attempts to set up rules and systems for humor. Most are about Tylor's fumbling attempts at comedy. Is there enough there for 10 episodes? We'll see. So far for good. (Available on Disney +) 3 out of 5

CATCH AND KILL: THE PODCAST TAPES: It's been a magazine article, a book, a podcast and is now reworked into a six-part documentary series. It's largely the story of Harvey Weinstein, his fall from movie wunderkind to convicted harasser and rapist, but with a particular slant. The sordid details are secondary. Journalism — how it's done and the courage it takes sometimes — is more prominent: how Ronan Farrow toiled to make the story public.

It was widely known in the movie industry. Writer Kim Masters says she told Weinstein: “I heard you rape women.” Starlets told of groping and forced sex and nude massages. Ronin worked towards a documentary for NBC but higher-ups killed it, possibly because of legal threats. Ronin took it to the New Yorker, where it ran and won awards. He also produced a series of podcasts of interviews with his sources. They've been excerpted and expanded with new material and archival material for this series. It's compelling to watch, partly for the details of journalism, getting the facts and knowing when you have enough, and partly for the barriers Ronin had to fight through. Weinstein used lawyers and even an ex-Israeli intelligence agent. But Ronin's biggest invective is for the NBC bosses who gave in to the threats. He's passionate and bitter about that. (CRAVE has two episodes on each of the next three Mondays) 4 out of 5

BLACK CONFLUX: It's a first feature with a remarkable grasp of creating a mood. And sometimes building dread. It could have a stronger story, but I'll go with what there is for now: a parallel tale of two lost characters in Newfoundland in 1987. Jackie (Ella Ballentine) is 15, from a broken home, tentatively getting out and finding what she can do. Auditioning for a choir, on the good side, hitchhiking and partying on the other.

Across town there is a loner, Dennis (Ryan McDonald), who reads skin mags and imagines there are women in his truck with him. He seems delusional, possibly dangerous. We're sure these two are going to meet and we fear what will come of that. Adolescent girls, and probably their parents, will recognize the ambience writer director Nicole Dorsey is creating so skillfully here. The fear builds gradually but incessantly. The picture of a young woman stepping out unaware of how inexperienced — heck, innocent — she really is makes for a tense experience. The film was at the Toronto Film Festival two years ago and was named on Canada's best 10 list, but was stalled by the pandemic. TIFF is streaming it. Watch for others or Google TIFF Lightbox to find it. 3½ out of 5

FEAR STREET PART 2: 1978: I thought Part 1 was surprisingly R-rated, but Part 2 really revives that old movie genre, the slasher film and the blood. The scene shifts from a small town in 1994 to another common location: a summer camp, years before. A survivor recalls how teens were having sex, smoking weed and getting killed by a maniac. That's part of a curse that's fallen on Shadyside, one of the towns they come from (the poorer one), and dates back to a witch hanged 300 years ago. Her hand was severed at the time, and the legend written in a gothic book says the curse “will last until body and hand unite.”

The teens are trying to explain the mystery. One finds the hand. Together they find the grave. Can they unite the parts? Well, the witch has other ideas. Knives and an axe come out. People you don't suspect wield them, and there's more blood and gore than you'd expect. Director Leigh Janiak says she was intent on making the film as thrilling as the horror movies she saw back in the '80s. She achieved that, as long as you have a stomach that can take it. Those scenes are brief but gross. At the same time, the teens are shown as distinct characters. That's a plus not always evident in these films. Part 3 will explain how all this started with the witch back in 1666. (Netflix) 2½ out of 5

Another Quiet Place, Kevin Hart not joking as a father and Pixar’s latest