Canada to donate 17.7M doses of AstraZeneca and raise money for global vaccination 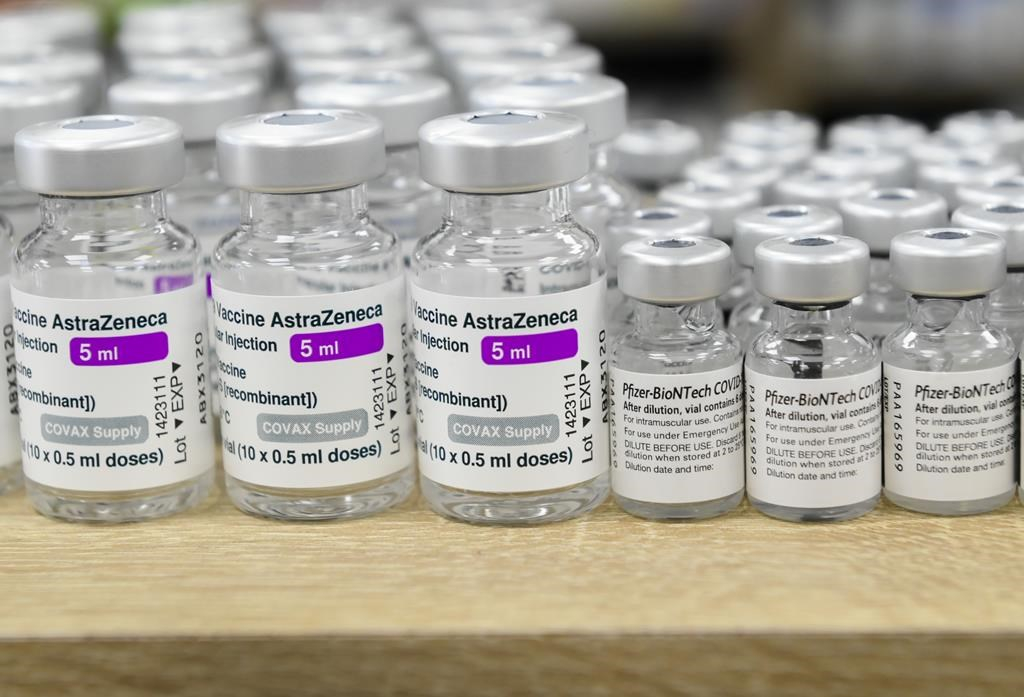 Vials of both Pfizer-BioNTech and Oxford-AstraZeneca COVID-19 vaccines sit empty on the counter at the Junction Chemist Pharmacy in Toronto on June 18, 2021. Photo by Nathan Denette / The Canadian Press
Previous story
Next story

OTTAWA — The federal government is donating 17.7 million doses of the Oxford-AstraZeneca COVID-19 vaccine and is asking Canadians to give their own money to help other countries get needles into arms.

Procurement Minister Anita Anand says after talking to provinces, it was determined these COVID-19 doses were excess supply, as demand for this vaccine had been met.

She says the AstraZeneca doses to be donated were supposed to flow into Canada through an advanced purchase agreement and be produced in the United States.

Anand says the shots will be made available to lower-income countries through the global vaccine-sharing alliance COVAX. The timing is still being worked out.

The National Advisory Committee on Immunization says mRNA vaccines, such as the ones by Moderna and Pfizer-BioNTech, are preferred over the viral-vector vaccine by AstraZeneca, even for people who received AstraZeneca as a first dose.

Prime Minister Justin Trudeau was among the Canadians who got AstraZeneca for his first dose and Moderna for his second.

While at the G7 last month, Trudeau pledged Canada would give back 13 million doses it was set to receive through a contract with COVAX, on top of millions of dollars already set aside for the global vaccine effort.

Canada is on track to receive 68 million doses by the end of July, which would be enough to inoculate most Canadians.

At Monday's announcement, Anand says 44 million doses of Moderna and 51 million shots from Pfizer-BioNTech are expected to have arrived in the country by the end of September.

With a population of nearly 38 million people, Canada would need about 76 million shots of two-dose vaccines to make sure everyone is fully vaccinated.

Canada is on track to receive 68 million doses by the end of July, which would be enough to inoculate most Canadians. #COVID19

Asked Monday about why the federal government hasn't marked any of its Moderna or Pfizer deliveries for donation given its volume of supply, Anand said these shots are still in high demand in Canada and things could stay that way.

“We are still watching the science evolve in this area in terms of the potential need for an additional third shot or boosters, and so we are making sure that we have the supply on hand of these vaccines to be able to serve the needs of Canadians in the short and the long term,” she said.

“Any decision on the donation of doses needs to be made by the Public Health Agency of Canada in co-ordination with the provinces and territories.”

It's unclear when, or whether, Canadians will need to get a third dose of vaccine.

Pfizer said recently it has seen a bit of a dip in antibodies in Israel six months after vaccination and intends to ask the U.S. and Europe to approve giving a booster shot.

A Pfizer Canada spokeswoman said it's too early to comment on whether the company will ask the same of Canada.

Very few people in this country would hit six months fully vaccinated until closer to the end of the year.

Health Canada and the federal public health agency issued a joint statement last Friday saying the duration of protection from COVID-19 vaccines is still being studied, but current data “shows good immunity in most people out to nine months after receiving two vaccine doses.”

The statement said the issue of needing boosters is top of mind for both organizations, and decisions will be based on scientific evidence. In April, Canada announced a deal to get 35 million booster shots from Pfizer in 2022, and another 30 million in 2023, in case they are needed.

“We have ordered way more vaccines than we will need, and we shouldn’t leave the excess in warehouses while most of the world does not have enough,” said Stuart Hickox, Canadian director for ONE, an international advocacy organization aimed at fighting extreme poverty, in a statement on Monday.

“Canada will have at least another 20 (million) excess vaccines by the end of September, with tens of millions more by the end of the year. These need to be sent to COVAX as soon as they become available.”

To keep up with its commitment to help vaccinate less wealthy nations, the Liberal government also announced Monday it would match donations Canadians make to a UNICEF fundraising campaign called “Give a Vax” for a contribution of up to $10 million.

David Morley, the head of UNICEF Canada, says the money raised will pay for transportation and some other logistical needs required to deliver vaccines to people.

“As Canadians are hearing more about the Delta and the Lambda variants, recognizing that if the pandemic continues to rage in other parts of the world, that's more opportunities for variants and mutations to emerge,” she said in an interview with The Canadian Press.

— With files from Mia Rabson

Canada to reach 55M vaccine doses by week's end, catching up to U.S. on second doses

By The Canadian Press | News, Politics
Coronavirus in Canada

With restaurants on long-term hiatus, some workers move on