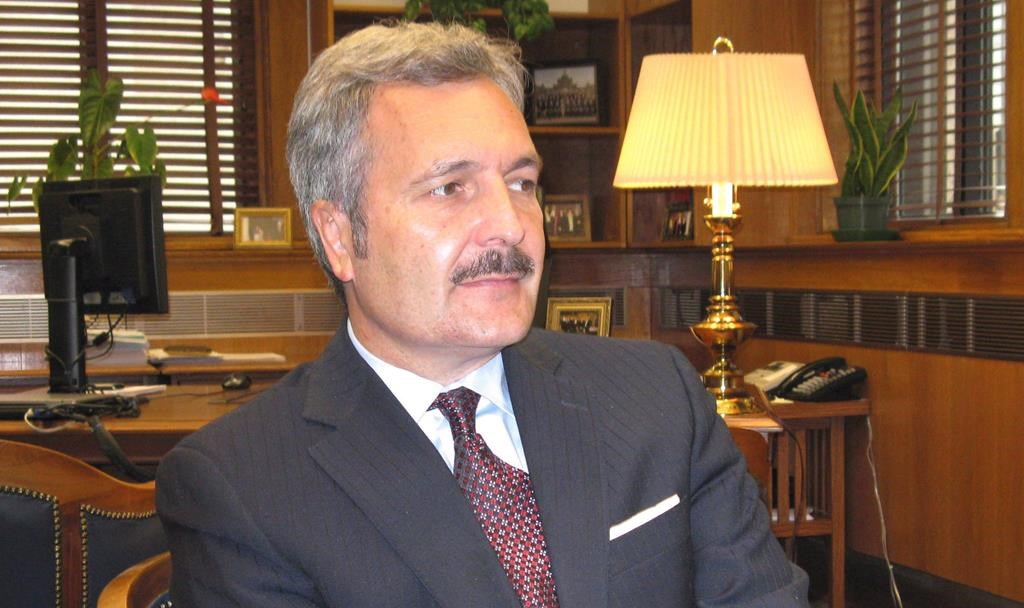 Chief Justice Glenn Joyal of Manitoba Court of Queen's Bench speaks to a reporter in Winnipeg on Sept. 27, 2012. Photo by Steve Lambert / The Canadian Press
Previous story
Next story

WINNIPEG — A group supporting multiple churches across the country in court challenges against COVID-19 public health orders has admitted to hiring a private investigator to follow a Manitoba judge.

“I accept full responsibility and sole responsibility for my decision to retain private investigation firms for observation of public officials,” said John Carpay, president of the Justice Centre for Constitutional Freedoms.

Carpay apologized for his “poor judgment” during a special hearing Monday called by the judge overseeing a court challenge of COVID-19 restrictions in Manitoba. He argued, however, the validity of conducting surveillance of other public officials in the country.

Court of Queen’s Bench Chief Justice Glenn Joyal said he realized he was being followed by a vehicle after leaving the courthouse last week.

He said a person, who appeared to be a teenage boy, also went to his home and spoke with his daughter. There was also information his private cottage was observed.

Joyal said it soon became clear a private investigation agency was hired “for the clear purpose of gathering what was hoped would be potentially embarrassing information in relation to my compliance with COVID public health restrictions.”

“I am deeply concerned and troubled.”

Police were called to investigate, as was the provincial government's internal security and intelligence unit. Joyal said, until Monday's court hearing, the private investigator had refused to say whom their client was.

Joyal heard a constitutional challenge from seven Manitoba churches represented by the Justice Centre in May. The churches argued their right to worship and assemble was violated by COVID-19 restrictions.

Government lawyers told court it's within the bounds of the legislature to grant the chief public health officer authority to impose reasonable rules.

Court of Queen’s Bench Chief Justice Glenn Joyal said he realized he was being followed by a vehicle after leaving the courthouse last week. #Manitoba #COVIDRules

Joyal has yet to rule, but said his decision, expected in a few weeks, would not be influenced by his experience being followed by the private investigator.

He did, however, point to potential implications for the administration of justice.

“The situation I have just described raises the spectre of potential intimidation, and it could also give rise to possible speculation about obstruction of justice — direct or indirect,” Joyal said.

The Canadian and Manitoba Bar Associations denounced the use of a private investigator, saying it threatens the integrity of proceedings before the court and raises serious concerns about the safety of judicial staff, including judges.

“Judicial independence is a crucial legal principle that guarantees judges have the freedom to make their decisions based solely on the facts and the laws,” the statement said.

The Justice Centre has also filed challenges against public health orders on behalf of churches or individuals in other provinces, including Alberta and British Columbia.

Carpay defended his group's decision to organize private investigation surveillance on a number of public officials across the country.

“We believe the public has the right to know whether or not government officials are complying with public health orders,” he told court.

He pointed to photos that showed Alberta Premier Jason Kenney and United Conservative Party caucus members dining closely together on a rooftop patio last month at a time when that province had public health restrictions limiting gathering sizes.

Carpay added the decision to hire surveillance is separate from the litigation and the Justice Centre's clients did not request it.

Lawyer Michael Conner, who represents Manitoba in the case, said there is significant concern that a firm, especially one involved in an ongoing case, hired a private investigator to follow a sitting judge.

“There is a distinction between investigating public officials and investigating the independent judiciary that are constitutionally protected,” he told court Monday.

Politicians and public officials have been faced with increased scrutiny and threats throughout the pandemic.

Dr. Brent Roussin, Manitoba's chief provincial public health officer, said Monday that he is not aware of whether the Justice Centre had been surveilling him. But he has been in contact with police about suspicious activity around his home.

“I've certainly had a number of threats against me and my family,” Roussin said.