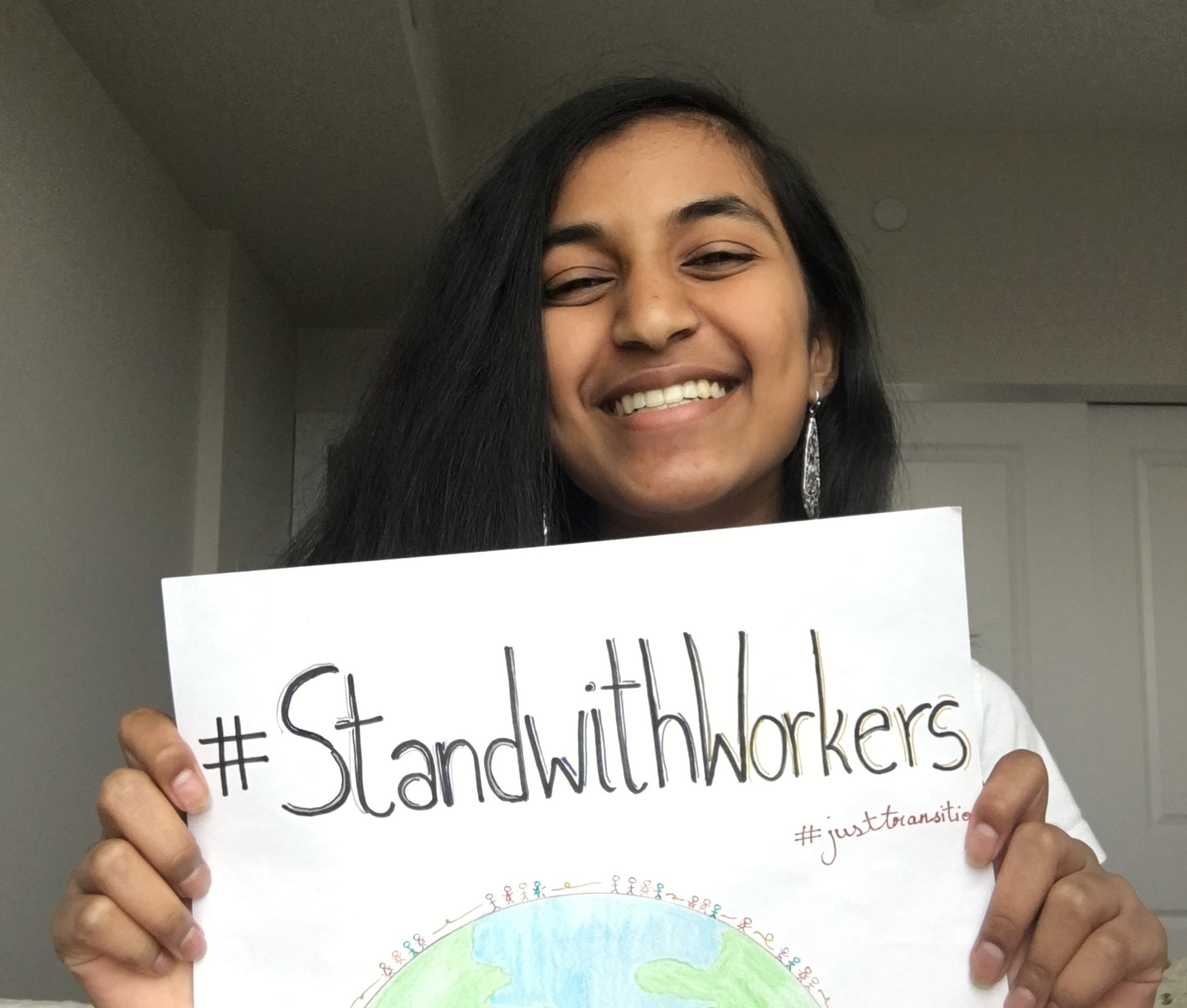 One of Aishwarya Puttur’s first “digital strikes” was with the #StandWithWorkers campaign on May Day 2020, shortly after the pandemic hit. Photo submitted by Aishwarya Puttur
Previous story
Next story

As part of a series highlighting the work of young people in addressing the climate crisis, writer Patricia Lane interviews Aishwarya Puttur, a student trying to heighten awareness about the role of banks in fossil fuel expansion.

Aishwarya Puttur wants Canadians to know that their money is being used by banks to fund fossil fuel expansion. As part of Banking on a Better Future, this 15-year-old high school student from Oakville, Ont., is calling on Canadians to make different banking decisions.

Tell us about this idea.

In 2016, Canada joined the worldwide consensus that we had to stop burning fossil fuels when we signed the Paris climate agreement. It seems Canadian banks did not get the memo. Since then, our top five banks have loaned $700 billion to fossil fuel companies. When we deposit our savings, we give these banks the capital to lend. Yes, they make loans for mortgages and small businesses, but when they give oil, gas and coal companies money to expand, they steal my generation’s future. I don’t want them to exploit my money to do that.

Tell us about Banking on a Better Future.

We are a nationwide youth-led initiative encouraging other young people, their families, and large investors to make banking choices to support the rapid transition we need to a clean economy. For many youths, opening that first bank account is a big moment. We hope they choose a credit union that does not finance oil, gas or coal. But if you must bank at your parents’ bank, we hope you will talk with them about other options to prioritize a healthy planet. We ask those who do bank with one of the Big Five to contact their branch managers and tell them you expect them to make meaningful climate commitments if they want to keep your business. We also organize in-person and digital actions to demand that CIBC, RBC, BMO, Scotia and TD divest from fossil fuels.

What drew you into this work?

I had been working with Fridays for Future and this opportunity came up. It seemed like a great way to take action on climate change, both personal and systemic. Recycling is good and eating less meat is good, but these are not going to make the kind of massive systemic change that we need. You have power over the system through this campaign. If you have the privilege to switch your bank, do so. They need your money to invest in fossil fuel, so when you switch, they are deprived of that.

Aishwarya Puttur is a member of Banking on a Better Future, which raises awareness about the role banks play in funding fossil fuels. #FossilFuels #banks #ClimateCrisis

I have family back in Hyderabad, India, and I am aware of how this crisis impacts South Asia with frequent floods and cyclones. The impact of climate breakdown is very personal to me, as it is to many Black, Indigenous and people of colour. Although most of the carbon pollution is generated by the wealthy, the suffering it causes is greatest in the most marginalized communities. For many people in Canada, the climate justice crisis must feel very distant. But to me, it is close.

Did your childhood affect your interest in this work?

During middle school, I saw other children throwing lollipop sticks out the classroom window. It was a fun game for them. But I was very upset about the litter. Plastic bottles were left lying around everywhere. Was no one watching? Did no one else notice or care? I felt very alone until I attended a climate action youth conference. That sparked something in me. These were my people. I joined Fridays for Future Digital and began volunteering with their digital campaigns.

My mother teaches that when we make a choice it is up to us to make the decision, but there will be consequences. She says we must always ask: “What is the right thing to do?”

World leaders already know they must take action to stop even more suffering, but all I’m seeing is empty promises. Millions of people are harmed now. Without immediate action, it will turn into billions.

People power! I joined the climate movement because I was anxious and afraid. I stayed because of the community. Now I am meeting wonderful leaders as young as nine and as old as 60! We share a passion and strive for the same goals.

Create change wherever you are able. Your voices matter regardless of your gender or skin colour or country of origin. Join an organization instead of creating a new one! Individual actions matter, but real change comes when we join together.

Listen to youth. Remember that if you live in the Canadian south, to a large extent you do not see the impacts of climate breakdown, but they are real and horrific in other places. COVID-19 reminded us that we are all connected. Show your support for us. Participating in youth-hosted events is very meaningful and much appreciated. Use your privileges to vote and be at the decision-making tables for the world that we are trying to create.

How helping save the oceans cured one young woman's climate grief

This climate change combatant has wheels and is ready to fight

Thank you so much for all your efforts, and important ones at that. If only more adults were as committed as you! You are a credit to your generation.