A new way to protect the Amazon — COVID-19 vaccines 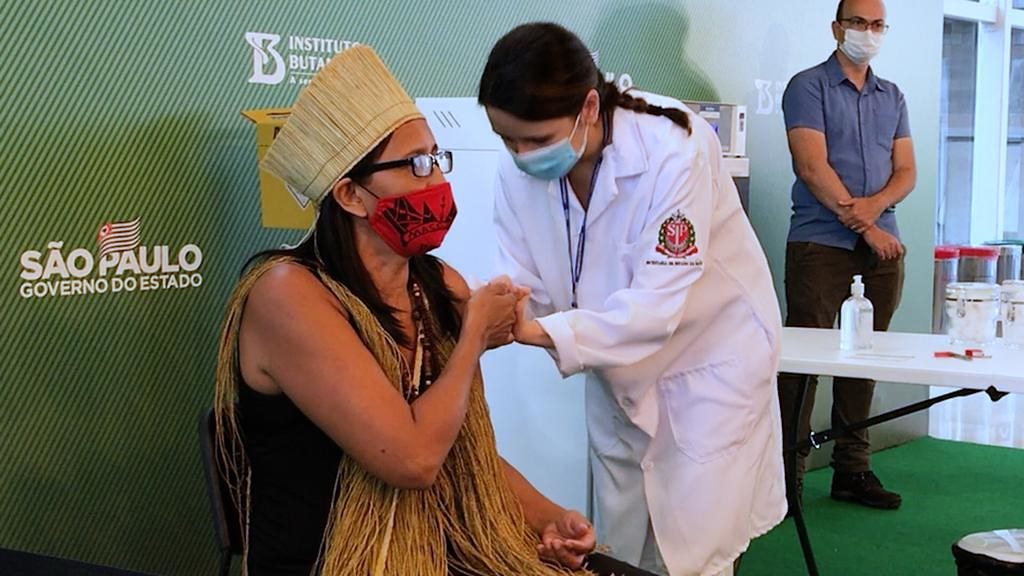 Since 2018, a land area six times the size of New York City has been destroyed by loggers and miners operating illegally along the Xingu River in Brazil’s Amazon region. The recently cleared land — slashed mainly to make room for cattle ranching and timber collection — is poised to contribute to an especially destructive fire season when combined with a historic drought.

The strongest counterweights to this looming destruction are the dozens of Indigenous and traditional communities who call this land their home. Across the globe, these sorts of communities manage nearly 25 per cent of the world’s lands — and those lands are home to about 80 per cent of the Earth’s biodiversity, which is a crucial bulwark against climate change.

The COVID-19 pandemic, however, has called attention to the precarity of those who protect these lands as well as their rapidly disappearing ways of life; across the world, Indigenous languages have been threatened with extinction over the past year. Brazil has been particularly hard hit by the virus, experiencing 13 per cent of the world’s COVID-19 deaths despite being home to just 2.7 per cent of the global population.

Since the coronavirus vaccine was made available to Brazil in March, Indigenous peoples have been vaccinated at a much slower pace than all other groups, which means they still face existential threats from the virus even as they continue to have standoffs with land-grabbers and miners. This dual threat adds to the sense that Brazil’s Indigenous lands are under siege during the presidency of Jair Bolsonaro, who has enabled the development of formerly protected lands in the Amazon.

But a team of physicians, nurses, and volunteers sponsored by the U.S.-based non-profit Health In Harmony, or HIH, is trying to combat the slow and potentially deadly pace of the vaccine rollout by offering traditional and Indigenous land protectors a helping hand. On May 27, a team from HIH, Brazil’s Federal University of Pará Medical School, and the Indigenous rights organization Instituto Socioambiental, or ISA, embarked on a three-week journey to more than 70 communities in the vicinity of the Iriri River, Xingu River, and Riozinho do Anfrisio Harvesting Reserve, a land conservation area. The team packed food, water, sleeping bags, and two boats filled with ice and 1,400 doses of the AstraZeneca vaccine. Almost all of those doses made it into arms over the next three weeks.

The expedition was made possible by donations and support from local environmental and Indigenous rights groups, including ISA and Respira Xingu, which conducted outreach and raised funds to procure the vaccines and supply the expedition. It was an initiative, representatives from HIH say, that shows that public health interventions can directly address the climate crisis and environmental injustice.

There’s research supporting the link between health care access in Indigenous communities and the ecological health of their land: A 2020 case study by Stanford researchers published in the Proceedings of the National Academy of Sciences found that “deforestation in an Indonesian national park declined 70 per cent, equivalent to an averted carbon loss worth more than $65 million,” over a decade following the opening of a health clinic for the local community. Emerson argues that by providing these communities protecting the rainforest with health care in the places where they live, they won’t have to leave their land to receive life-saving treatment; doing so could leave their unguarded land susceptible to deforestation by cattle ranchers and loggers.

Dr. Érika Pellegrino, a Brazil program coordinator for HIH and participant in the expedition, emphasized that the program’s success was dependent on a lot more than just having the ability to vaccinate people and offer health care. “We couldn’t just go in and assume we knew what people needed and wanted,” she told Grist. “We had to listen.”

That meant working to understand people’s hesitation around the vaccine, which could stem from religious beliefs, anti-government attitudes, or skepticism of the motives of an American organization like HIH. According to Pellegrino, some community members were hesitant of American aid due to the “enabling” relationship between Brazilian President Bolsonaro and former U.S. president Donald Trump, who often signalled support for Bolsonaro’s lax deforestation prevention strategies in the Amazon.

“It’s a very colonial concept to just go in and think that we’re going to make a difference without having a relationship that has existed there for a long time,” said Emerson. That’s why it was important for the group to partner with Brazilian universities and organizations, including inviting at least one nurse or health worker from each rainforest community to be a part of the vaccination process.

It also meant being OK with vaccine doses being turned down.

“There was an older man,” Pellegrino said, “who — three or four days after we vaccinated him and his wife — died suddenly, probably from a heart attack. But the word spread fast from community to community, and a lot of people got scared that it was because of the vaccine.”

To combat these fears, Pellegrino used her training as a psychiatrist and mental health specialist. Most of the hesitation was unquestionably valid, she said, because it was rooted in fear that side-effects could force people to miss work needed to feed their families. However, in total, only 31 people out of more than 1,000 turned down shots during the expedition, according to Pellegrino. The group hopes to travel back to provide second doses later this summer, but Pellegrino said it could take a month or more to obtain enough doses, due to the speed of Brazil’s overall vaccine rollout.

By the end of May, only 0.3 per cent of all vaccine doses worldwide had been administered in low-income countries. At that time, less than 20 per cent of Brazilians had received at least one shot, while more than half of Americans had received their first dose.

“As members of a global community that has contributed to ‘vaccine apartheid’ and global environmental injustices, it is the least that can be done,” Emerson said of her group’s work.