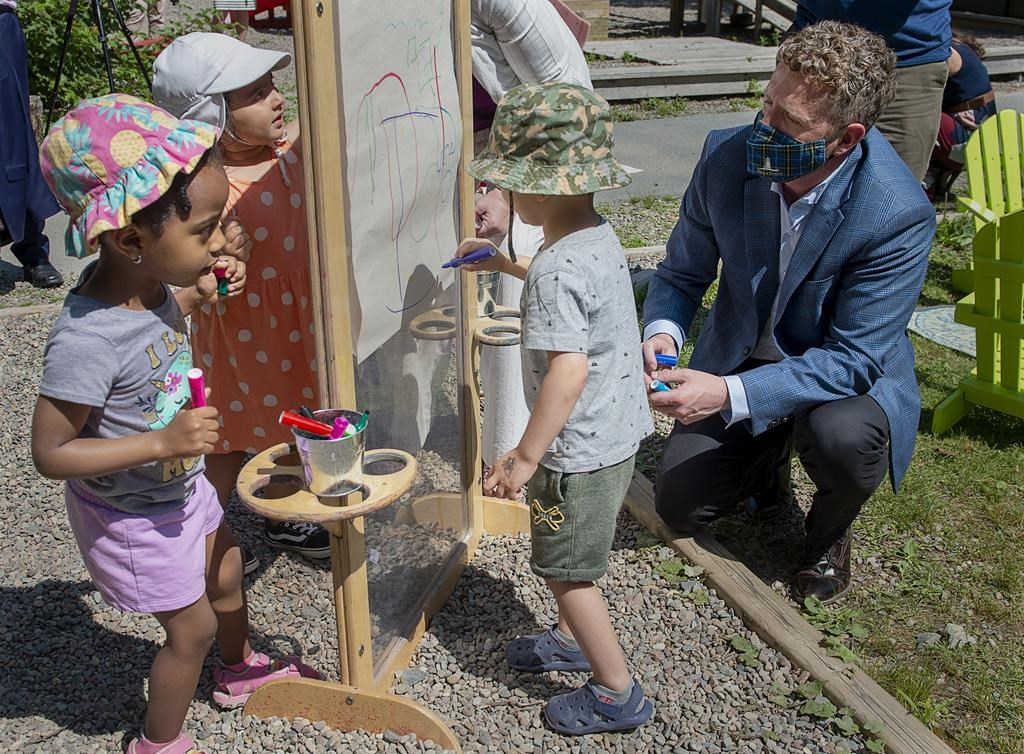 HALIFAX — Nova Scotia has become the second province to sign on to a federal program that would fund thousands of subsidized daycare spots, in a deal that plays into the prime minister's and premier's potential election platforms.

Neither Nova Scotia Premier Iain Rankin nor Prime Minister Justin Trudeau have announced a campaign date, but there's been speculation calls could come within weeks or even days.

During Tuesday's announcement at a Halifax child-care centre, Trudeau appeared via video link and said the $605-million deal would halve the average child-care fees in the province by the end of next year, to $20 a day per child. The program, he added, would gradually lower them over five years to $10 a day.

Trudeau also said the agreement with Nova Scotia will create 4,000 new, regulated early learning and child-care spaces within two years and a total of 9,500 spaces by the 2025-26 fiscal year.

Nova Scotia joins British Columbia in signing a child-care deal with Ottawa. The federal government's recent budget included more than $27.2 billion on child care for the provinces, provided they agree to targets on affordability, quality of care and training of early childhood educators.

Morna Ballantyne, executive director of the group Child Care Now, said in an interview she's read the British Columbia deal and noted there is a clause that allows Ottawa or the province to cancel it. But each time a province signs on, she said, it adds momentum to the federal program and sets up a scenario where female voters would react poorly to political parties that oppose or threaten to cancel the deals.

Ballantyne, an advocate for publicly funded daycare, said she doesn't think the deals are going to be cancelled — unlike what happened after Liberal prime minister Paul Martin in 2005 signed a series of child-care agreements with the provinces. Stephen Harper's Conservative government ended the deals after taking power in 2006, pursuing an alternative path that included monthly payments to parents to assist them with child-care costs.

"It's going to be very difficult to roll back the kind of commitments being made in these agreements as they resonate with a lot of voters and sectors in the Canadian economy," Ballantyne said.

Corey Tochor, the federal Conservative critic for families, children and social development, referred to the Trudeau government's plan in a May news release as "an 'Ottawa-knows-best' government approach to child care that takes away choice and ensures that only publicly funded operators will survive, leaving behind small businesses, women, and families."

Meanwhile, Rankin said the child-care agreement is a result of the close partnership his government enjoys with the federal government, as he prepares for a potential election campaign. The 38-year-old premier, who will become a new father in November, said he had been eager to start discussions with Ottawa's Liberals since the budget announcement on child care, adding that he wanted to deliver the program in his province.

Nova Scotia has become the second province to sign a deal with Ottawa for regulated #ChildCare spaces that would lower the average cost of care to $10 per day over a five-year period. #nspoli #cdnpoli

"This announcement will become a strong foundation of our economic plan as we emerge from this pandemic," Rankin said. "We know that every dollar invested in this sector returns six dollars to the economy … It means more women can enter the workforce or go back to school.

"What we've announced today is a major transformation of our child-care sector."

Nova Scotia currently invests $132.6 million in early learning and child care annually, including $54 million for pre-primary and more than $75 million for the child-care sector.

In a news release, the province said it will contribute $40 million over the five-year agreement on top of current annual funding to the child-care sector. The provincial government will also create a new organization to manage the operations of all regulated child care in the province, with oversight remaining with the Department of Education and Early Childhood Development.

An additional $22.5 million in federal funding was also announced, with $11.6 million to extend the Canada-Nova Scotia Early Learning and Child Care Agreement and a one-time $10.9-million investment to pay higher wages to early childhood educators and provide free tuition, books and bursaries.

This report by The Canadian Press was first published July 13, 2021.