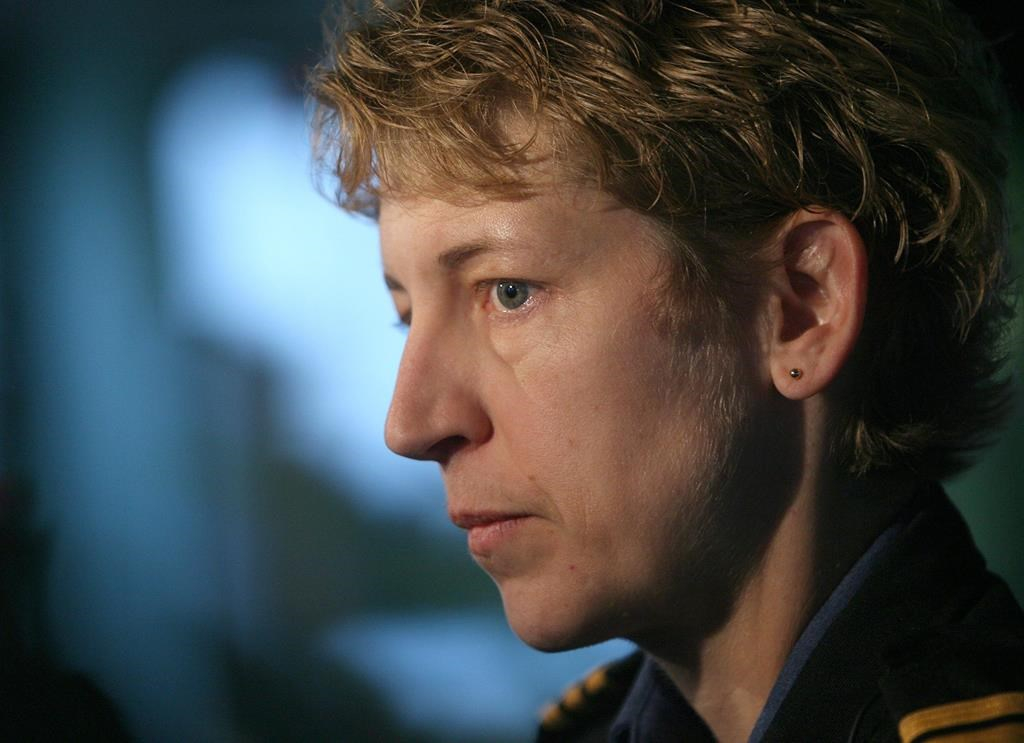 Commander Josée Kurtz listens to questions from reporters during a tour of the HMCS Halifax on Tuesday, April 7, 2009 at the HMC dockyards in Halifax. File photo by The Canadian Press/Mike Dembeck
Previous story
Next story

Commodore Josée Kurtz may be bringing an outsider’s perspective as the first woman to command the Royal Military College of Canada, but she says she has no immediate plans for radical changes to the institution.

Kurtz was formally sworn into her new role last week, becoming both the first woman to lead the 145-year-old RMC and one of the few commandants who did not study at the college, which is responsible for producing the majority of the military’s officers.

Her arrival coincides with the Canadian Armed Forces’ latest reckoning with sexual misconduct in the ranks, notably its handling of allegations that some top officers engaged in inappropriate — and in some cases criminal — behaviour.

Many of those officers are RMC grads, which has prompted fresh questions about the role the college has played in contributing to what numerous experts and reviews have described as a highly sexualized culture in which leaders protect each other.

In an interview with The Canadian Press, Kurtz expressed her hope that her appointment would show others that they can have a successful military career and rise through the ranks no matter their backgrounds.

As for what her appointment means for RMC, “my experience probably brings a different lens, a different way of looking at issues and problems that could be a positive asset to the college,” she said.

Kurtz acknowledged the college will need to play its part in changing the military’s culture, and said she will no doubt order some changes once she gets a better handle on the institution.

“We are engaging in a rescope or change of our culture that’s going to take time and sustained effort, and RMC is going to have to be part of that,” she said. “We're going to have to implement some changes that are necessary.”

But Kurtz also said the college has successfully produced generations of officers for Canada, many of whom have moved on to successful careers after the military, and that she has no plans to make sweeping changes right off the bat.

“RMC is doing a great job of delivering on its mission,” she said.

And for anyone who thought she would bring “sweeping changes” because she is a woman and not an RMC graduate, “I don’t think that’s the point. I was appointed to RMC because my chain of command trusted in my background, my experience and in my leadership.”

Military leaders have in the past played down the need for significant reforms to the military college, particularly when it comes to sexual misconduct. The most recent example was in 2016-17, when then-defence chief Jonathan Vance ordered a review of the institution.

Vance, who stepped down as chief of the defence staff in January and retired from the Armed Forces in April, is currently under military investigation for alleged sexual misconduct. He has denied any wrongdoing.

The review by a panel of retired senior officers was focused primarily on students’ mental health following a series of suicides at the college. The panel said it did not find evidence of rampant sexual misconduct.

Vance at the time told The Canadian Press the findings reflected his own assessment given a lack of police reports and other indicators, saying: "I would know if there was a trend. If there was a serious problem there, we would know."

Those findings contradicted retired Supreme Court justice Marie Deschamps’s report in 2015 that sexual harassment was considered a rite of passage at the institution, and sexual assault was an "ever-present risk."

A Statistics Canada survey released last year also undercut suggestions all was well at RMC and its French-language counterpart in St-Jean-sur-Richelieu, Que., with 68 per cent of students saying they had witnessed or experienced unwanted sexualized behaviour.

Fifteen per cent of female officer cadets reported having been sexually assaulted in the previous 12 months.

Carleton University professor Leah West described RMC as a “breeding ground” for such behaviour as she testified to a parliamentary committee in May about her own traumatic experiences as a military officer.

Some faculty have quietly wondered whether Kurtz, as an outsider, will be able to bring real change.

Asked about such concerns, Kurtz spoke about both her collaborative approach and ability to make tough decisions, adding: “Give me a chance to show you my experience, my background, how I look at things. And let’s have a conversation about that.”

As for what she would tell prospective students and their parents: “RMC is a strong institution that delivers strong leadership and children who have a desire to join would be welcome and be part of the culture, the new culture that we’re trying to implement.”