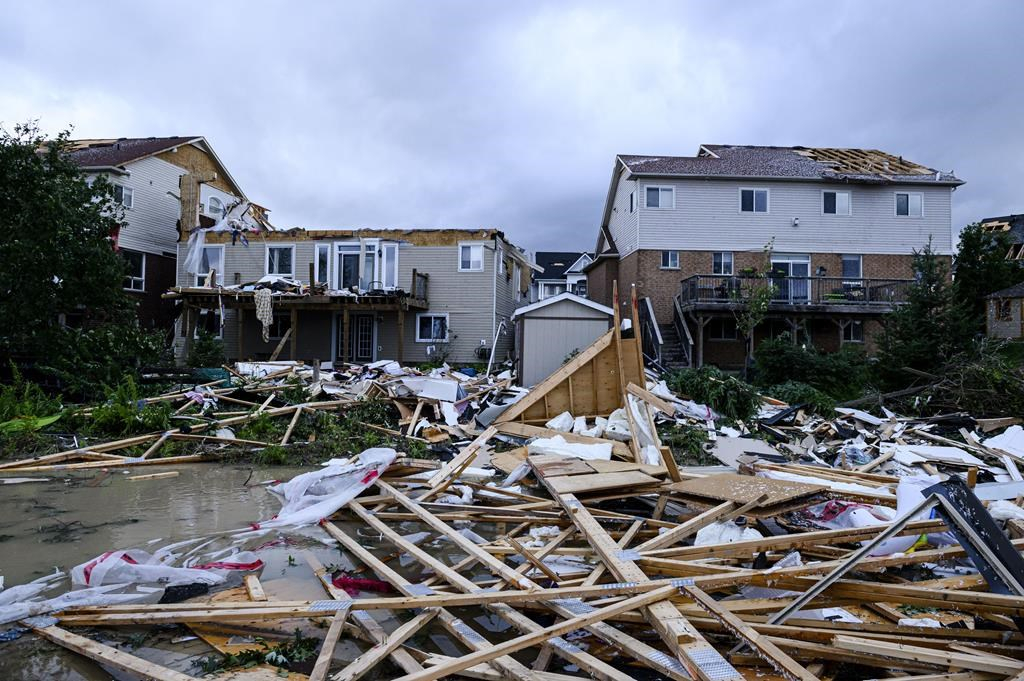 Damage left after a tornado touched down in a neighbourhood of Barrie, Ont., on Thursday, July 15, 2021. Photo by The Canadian Press/Christopher Katsarov
Previous story
Next story

The central Ontario city of Barrie will turn its attention to clean-up today after a twister tore through a neighbourhood, damaging homes and injuring several people.

Paramedics have said eight people were taken to hospital, and several others were treated for minor injuries.

Crews are expected to start making some of the repairs today, including patching up roofs that weren't too badly damaged.

Mayor Jeff Lehman says the community has already started coming together to support those who lost the most to the tornado, donating food and supplies.

He noted it's a familiar scene to many long-time Barrie residents. A tornado killed eight people and injured more than a hundred others in the city in 1985. Hundreds of homes in the Allendale neighbourhood were destroyed.

"The scenes today are reminiscent of it," Lehman said. "I lived in that neighborhood as a boy. I mean, it's shocking, you know, you never expected to see it again."

Yesterday's tornado brought back memories for 70-year-old Judy Arksey, too.

"It was like deja-vu," she said. "I got one look at the sky and I knew what was coming."

She was in her daughter's car in the driveway when the tornado ripped down the street yesterday. Her two grandkids — aged six and 16 — were with them.

"I remember the horses being lifted up out of the racetrack during the other tornado, and I thought, here goes our car with my grandkids in it," Arksey said.

As soon as she saw the sky, she said, she told them to look down so they wouldn't see what was coming for them.

Luckily, she said, the car stayed on the ground despite taking a beating in the strong wind, and she and her family escaped injury.

She said the community has come together in the wake of yesterday's destruction, just like it did 36 years ago.

Arksey spent two weeks volunteering after the 1985 tornado, she said, helping out however she could at the church.

This report by The Canadian Press was first published July 16, 2021.