B.C. wildfires force evacuations and leave others ready to flee 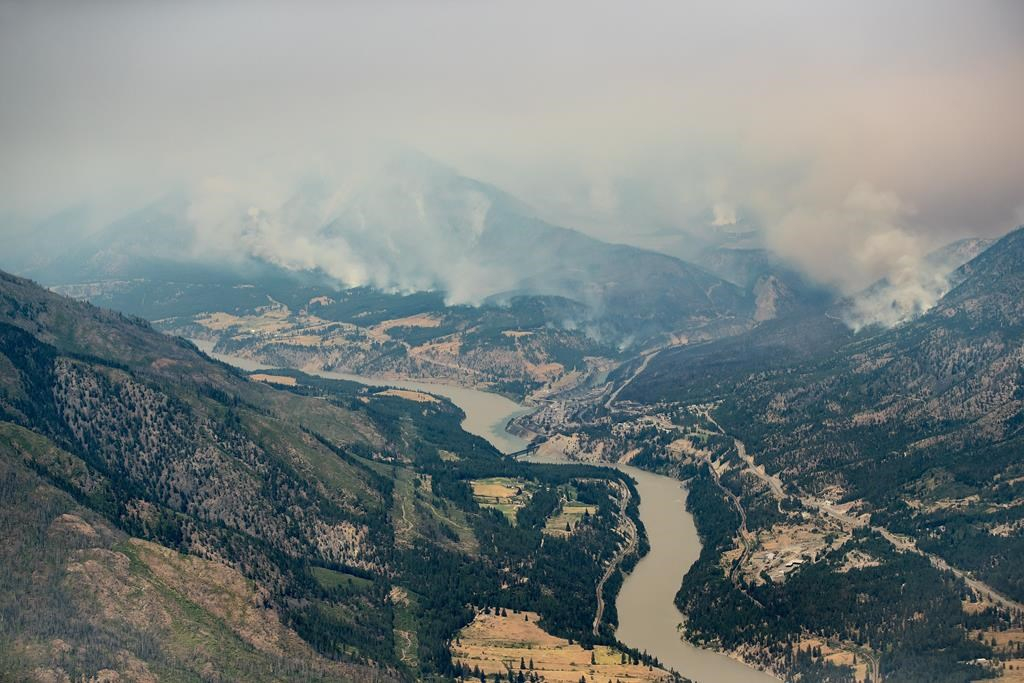 A wildfire burns in the mountains north of Lytton, B.C., on Thursday, July 1, 2021. File photo by The Canadian Press/Darryl Dyck
Previous story

A lack of resources is forcing officials in British Columbia to triage the wildfire fight to focus on the blazes that threaten lives and safety.

Relentless heat has parched the province, fuelling more than 300 fires, which have forced residents in more than 2,800 properties to evacuate while 10,000 more are on alert and have been told to get ready to leave.

Kurtis Isfeld, the deputy director of the BC Wildfire Service, said in a briefing Thursday the same issues impacting B.C., such as dry weather, are also problems in other provinces, leaving less resources to share.

"With the current resource challenges we have, we're unable to commit to all new ignitions," he said.

Isfeld said the fire conditions are more reminiscent of August.

"Unfortunately there is little to no reprieve in the forecast," he said. "Particularly in the south, conditions will remain hot and dry for the summer months."

Public Safety Minister Mike Farnworth said in a statement the province is deploying all the necessary personnel and equipment to battle the fires, adding that the Canadian Armed Forces used aircraft to help some residents flee their homes, but he did not specify from which fire.

Fires in the Okanagan and other Interior regions led to intermittent closures of Highways 1, 20 and 97 on Thursday.

And officials with the Thompson-Nicola Regional District passed a motion Thursday night asking the province to declare a provincial state of emergency due to the wildfires.

Meanwhile, warnings of smoky skies from Environment Canada affecting the eastern half of the province remain in place.

The community of 100 Mile House is under an evacuation alert, menaced by an 87-square-kilometre blaze that broke out last week, while alerts also covered the villages of Ashcroft, Cache Creek and Savona as a nearly eight-square-kilometre fire reported Monday remained uncontrolled.

Mitch Campsall, the mayor of 100 Mile House, said residents are using lessons learned from a 2017 wildfire that forced evacuations.

"People have got their to-go bag ready to go. They're ready to go at the drop of the hat," he said in an interview.

Volunteer firefighters have also learned different tactics and trained on different equipment to fight fires as a result of what happened in 2017, Campsall added.

The region has faced several moments of adversity in the past few years, including wildfires and a mill shutdown, Campsall said.

Campsall said he's worried about what happens as the summer goes on.

"We've just barely got into the fire season, what's coming up next? What's the next issue?" he said.

Erin Bull, a fire information officer with the BC Wildfire Service, said some progress had been made against the Canim Lake fire, burning just north of 100 Mile House.

More than 40 firefighters, along with structural protection teams, have been battling the blaze, Bull said.

More than 1,760 square kilometres of land has burned in B.C. since the wildfire season began on April 1, and Environment Canada shows no end in sight for drought-like conditions, although forecasters say the central Cariboo could see a trace of rain by the weekend.

In an effort to help limit the spread of fires, Farnworth urged residents in areas threatened by wildfires to prepare their properties, such as by trimming trees and clearing gutters.