Movies with or about LeBron James, Anthony Bourdain, and the Berlin Wall 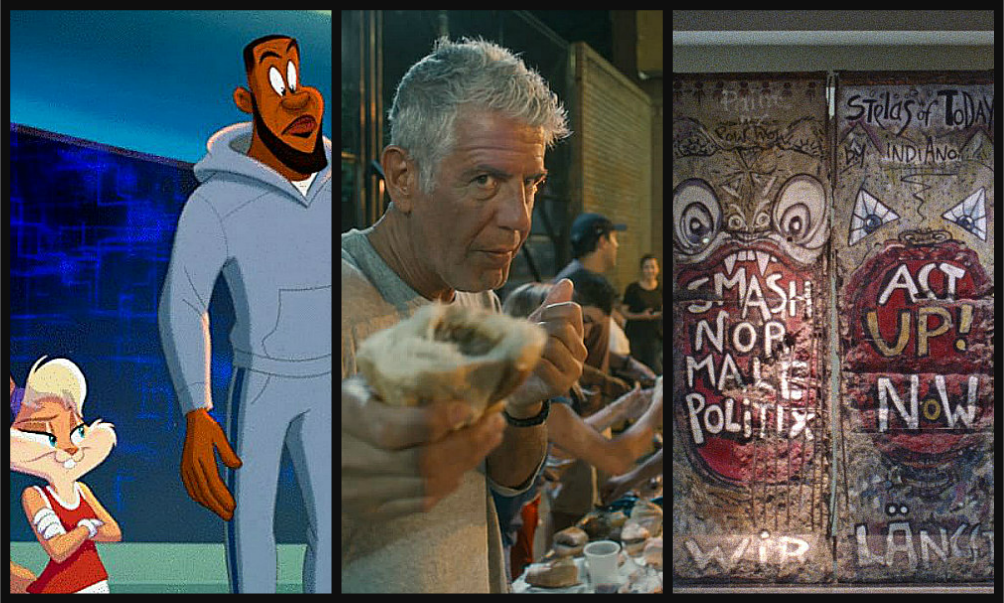 There are so many new movie choices this week that I couldn't cover them all. I've had to hold over Sweet Thing (highly recommended) and The Misfits (not so much) and two on Netflix. But look at what I do review.

SPACE JAM: A NEW LEGACY: This is not a good time for LeBron James. For the first time in the basketball superstar's career, a team he is on was eliminated in the first round of the playoffs. That means he doesn't have any excuse to avoid going out to promote his movie, and that could be embarrassing. He'll have to claim it's very good, when it's pretty bad. It's big and crass, and on screen, he's not at all personable, like Michael Jordan who starred in the original film 25 years ago. That one now feels like a work of art compared to this which is stuffed with inside jokes (hardly any of them funny), sports references (by six writers who are obviously basketball fans) and shoutouts to Warner Brothers' film history, the cartoons for sure, but also Casablanca, A Clockwork Orange (seriously out of place) and others. Wonder what the target audience, kids, will make of them?

LeBron plays himself as a father who gets into a giant basketball game against his own son. Bugs Bunny and others are on his team, big characters are on his son's. That's because they've been sucked into a computer by a rogue artificial intelligence, played with gusto by Don Cheadle. The game is loud and glittery, live and animation mixed, with stop-motion added in and video-game rules in force. The score is 1,039 to 37 at one point. Porky Pig does a rap song at another. Get the idea? It's all just a lark. Journeyman Malcolm D. Lee directed, ex-pat Canadian Ivan Reitman is one of the executive producers and more surprising, Ryan Coogler (Black Panther, Fruitvale Station) is one of the producers, along with LeBron James. (International Village, Marine Gateway, suburban theatres and on-demand at various sites.) 2 out of 5


ROADRUNNER: A FILM ABOUT ANTHONY BOURDAIN: I learned a lot about the man in this documentary by Morgan Neville (who also made the Mr. Rogers film not so long ago). Bourdain, who everybody seen here calls Tony, was very shy, and in a scene with Iggy Pop of all people, agreed that a major aim in life is “being loved.” Those two ideas show up constantly in the recollections of friends and associates, and may go a great way in explaining the inevitable, which we all now is coming: His death by suicide that shocked so many people. Even his best friends can't understand it, although the film seems to have a theory, which it hints at, but doesn't dwell upon.

What it does give us fully is his biography. His rise from a “dead-end dishwashing job” to a chef and then a celebrity TV traveller. Along the way, he became a heroin addict and later managed to quit. He had momentary fantasies about harming himself, and later on, according to a friend, turned into something of a “control freak.” So the picture of him becomes very complex, even as it can't explain all. Old film (including a clip from a Wendy Mesley chat) and Tony's own voice advance the story. I learned later, there's a controversy because a small part of the voiceover was created with artificial intelligence. Three sentences. Doesn't seem a big deal when there's so much else heard from him. The film is candid, as best it can be, and even raw. (The Park, International Village and two suburban theatres.) 4 out of 5

THE AMERICAN SECTOR: This is one of the most fascinating films you'll see this year, because it's not only strange, but makes you think about what history really means. Two filmmakers, Courtney Stephens and Pacho Velez, travelled around the United States to sites where parts of the old Berlin Wall are now standing. They found dozens; I lost count. Various parks, the CIA headquarters (which they couldn't visit), Microsoft's head office, universities, the Reagan Library, malls, even a private home or two.

How they got there is rarely explained, but many people are eager to say what they mean. Usually it's a connection with history and American victory or exceptionalism. Most intriguing to me are the thoughts of two Black people. In Charlottesville, a student wonders what possible connection the university has to the Berlin Wall considering the far more relevant history nearby. Statues of Robert E. Lee and Stonewall Jackson were removed just this week and a violent demonstration preceded that. At the Mason Dixon Line, a man says the wall reminds him of his own people's search for freedom. “We are not alone.” (Screening three more times at The Cinematheque.) 4 out of 5

PIG: It's good to see Nicolas Cage's other side again. He's not in freakout mode here; he's a fine actor creating a character with issues that come into focus slowly and quietly. He's living off the grid in the forest near Portland, Ore., supporting himself by finding truffles with the help of a prized pig. Why he's there is only revealed later, and not all that clearly. Who he is and what happens to him is key. Somebody steals his pig, and with the help of his truffle buyer (Alex Wolff), he goes to town to search for it.

Turns out he's known there. He's a former chef and well-remembered, even after 15 years away. Why he left is a mystery we can ponder. He's got an apocalyptic view of life (“There's nowhere to go.”) and is aware that nothing lasts forever. Perhaps there's a tragedy in his past. He can't bear to listen to a cassette tape of his wife. The film by Michael Sarnoski draws us into all those questions as he's on his quest. There's a mood of melancholy and regret along with determination that Cage brings out wonderfully with his performance. A scene of fighting chefs is an odd intrusion on the existential milieu of this film. (Rio Theatre.) 3½ out of 5

GUNDA: We're not finished with pigs just yet, and here's why. This is a highly emotional visit with a big sow just going about her life, sleeping, digging in the wet soil, giving birth, feeding a big litter and watching them grow. A couple of cows and a one-legged chicken show up, but no people. (A tractor is the only sign of them.) Sounds uneventful? Far from it. There's a lot going on here, often in your mind as you watch this animal.

The piglets' feeding is busy and chaotic. A couple fight at one point. The mother, even as she's languishing in the mud or in the straw, exudes dignity that you might not associate with pigs. Watch her be visibly upset and confused in a late scene that'll deeply affect you. The film obliges you to look at, and think about, creatures like her differently than you have. This pig has feelings and shows them. The director is a veteran from Russia, Viktor Kosakovskiy, and Joaquin Phoenix is executive producer. The film is extraordinary. (Rio Theatre.) 4½ out of 5

SEA FEVER: The pandemic stymied this film, but thankfully not killed it. It got very good reviews at the Toronto Film Festival two years ago, played other festivals, and then pretty well disappeared. HBO and Crave have rescued it, and that's good. Look how that resonates. There's an infection looming for everybody in a small fishing boat out on the ocean. Talk about claustrophobia.

A marine biology student (Hermione Corfield) has come on the trip for research. When the boat stalls, she dives to see what's down in the water. There's a flock of undulating creatures that are oozing infected gel through the boat's boards. They're all part of one giant animal, “bigger than anything on record,” and must be quarantined. So she says. The skipper (Dougray Scott) dithers, but the real boss on board, Freya, played by Connie Nielsen, is absolutely opposed. She'd lose the profits, and then the boat. The result is high tension and thrills, plus an ecological thread, from a talented new director, Neasa Hardiman from Ireland. (Playing on Crave.) 3½ out of 5

LOKI: Just to finish what I've been writing about, the last episode, No. 6, is now up there, and it ends with a surprise: “To be continued.” A second season will be coming, and good for that. All the questions have still not been answered.

I won't give away what has been revealed, what Loki (Tom Hiddleston) and Sylvie (Sophia Di Martino) found when they broke into that giant mansion at the end of time. They didn't get enough answers, that's for sure. A lot is still not clear, and there are some tantalizing hints. A statue near the end of the episode, for instance. Is it of a character to come? Why linger on it so long? Also, is this series, as so much online chatter has it, the start of the next phase of the Marvel Comics Universe? It entirely changes it, writes one analyst. That's for the fans to ponder. For me, it's been an intelligent and engrossing series. (3 out of 5)

It wasn't eligible for Emmy Awards nominations, like WandaVision, which grabbed many, but that'll come. (Disney+.)

FEAR STREET PART 3: In this final part of the trilogy based on R.L. Stine's young adult novels, we do find out what brought the curse on the town of Shadyside. It's set back in 1666, when on the very same spot, Sarah Fier was hanged as a witch. That caused it, and characters in the two earlier movies suspected that and looked for proof. We see it happen and also learn there's a same-sex love story involved. The film then reverts to 1994, where the story started to deal with a character who inherited the prejudices from way back then. It's pure fantasy, sure, but quite engrossing, and in the resolution: satisfying. And with a bit less of a slasher component than parts 1 and 2. (Netflix.) 3 out of 5