Annamie Paul is fighting to change the narrative, but the numbers are clear 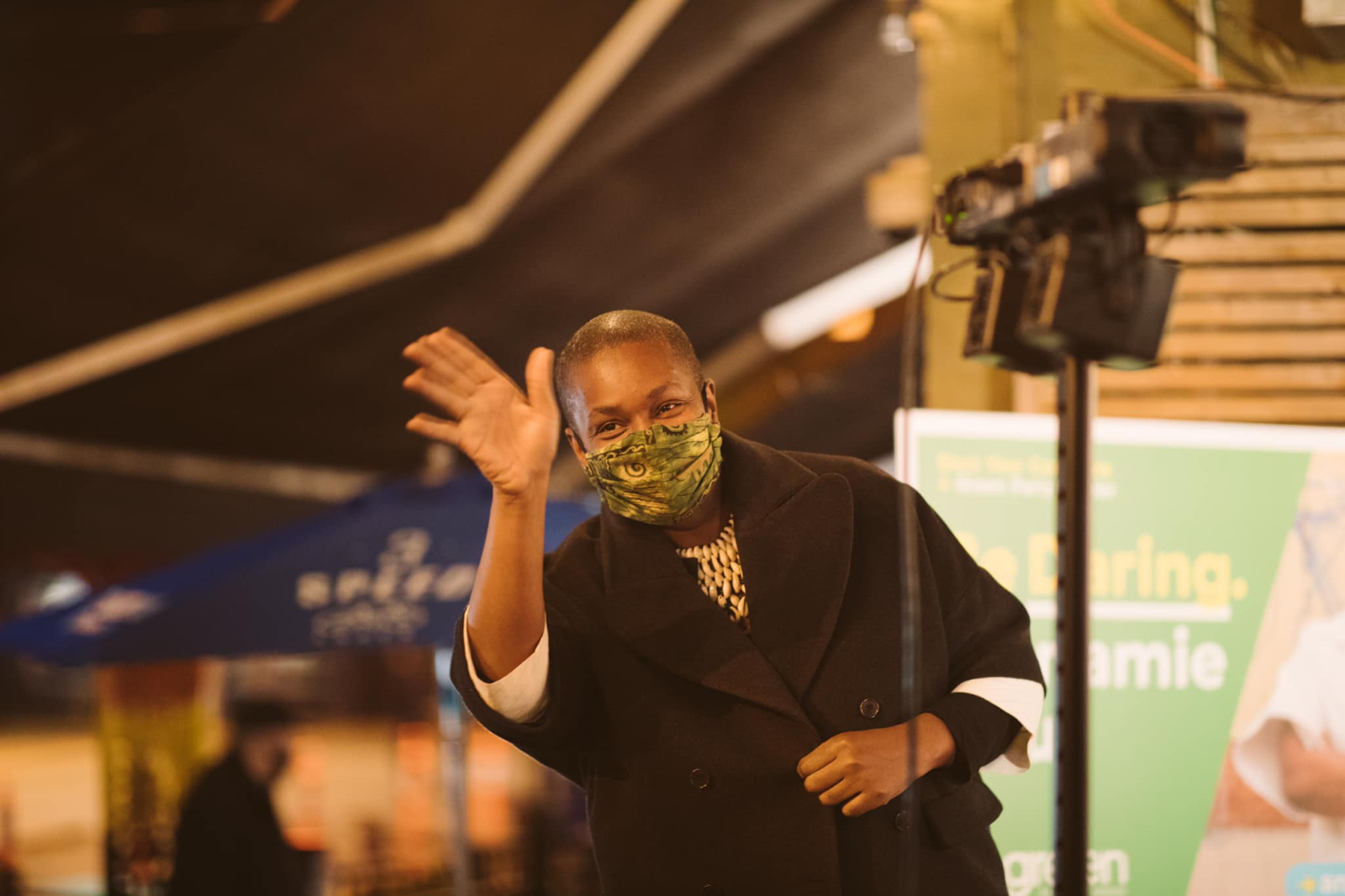 Green Party Leader Annamie Paul attempted to reset perceptions the party is in a tailspin after months of infighting, but a closer look reveals a steep road ahead if an election is called. Photo Paul / Facebook.
Previous story
Next story

A recent newsletter from Green Party Leader Annamie Paul to members attempted to reset perceptions the party is in a tailspin after months of infighting, but a close look at the figures reveals a party on life support.

The newsletter sent on July 9 claims the party’s “momentum is growing,” and says “donations, memberships, donors, and polling numbers all tell the story of a party on the rise.” The Green Party of Canada (GPC) leader's newsletter also reveals a snapshot of the party’s finances not yet publicly available with Elections Canada, characterized as “Great News!”

According to the newsletter, from April to June 30, the party raised more than $670,000, up $50,000 from the same period last year. But 2020 was not an election year, making the value of the comparison limited.

Compared to 2019, the most recent election year, $670,000 is actually a drop of over $750,000 from the more than $1.4 million received in the same quarter. As the GPC marched closer to 2019’s October election, its fundraising grew. Elections Canada reports the GPC received nearly $2.6 million for the quarter running July to September 2019.

The GPC’s fundraising ahead of the 2019 election delivered the party three seats, and its first off Vancouver Island. Its pull this quarter suggests if an election is held this fall, the GPC will need to dramatically step up fundraising efforts to be competitive.

“They're going to put as best a spin on this as they can, of course,” said University of Prince Edward Island political science professor Don Desserud. “I'd be more worried about the members than I would be the donations. That's a stronger indication of a problem.

“Their members are more committed, so if they do leave, that's a heck of a statement,” he said.

However, in September 2020 — before Paul was elected leader — the party boasted having nearly 35,000 members, owing to thousands of people signing up ahead of the leadership convention.

Paul’s office did not return multiple requests for comment.

Meanwhile, Green Party executives kicked off a process this past week that could have resulted in suspending Paul’s leadership. Sources told The Canadian Press the party’s interim director Dana Taylor began a membership review that would have suspended Paul’s status as leader while it’s underway, for the stated reason she launched legal proceedings against the party, an accusation disputed by officials close to her.

A newsletter from Green Party Leader Annamie Paul is claiming party momentum is growing and it's on the upswing, but a peek at its finances reveals a steep road ahead if an election is called. #cdnpoli

The party’s code of conduct says the executive director “will automatically initiate a membership review” if a member “initiates legal proceedings against the party.”

Sources have told Canada’s National Observer that cease and desist letters were issued to some members of the Federal Council during the recent infighting, but it is unclear whether such a letter amounts to a legal proceeding under party guidelines.

Despite the infighting, Desserud says not to count the Greens out just yet.

“Depending on how they focus their support, you can revamp and get back in the game pretty quickly. Most of the parties at one time or another have suffered a catastrophic defeat,” he said. “​​So parties do collapse, the thing is the Green Party has never been a party that's up there to collapse.”

Desserud added he doesn’t want to see the Green Party lose its national voice, but that if there is a silver lining to the party’s fighting it’s that they have less to lose.

“If they go back to ground zero where they have no MPs, that means they're down two seats. It looks big, but from their standpoint, they're still at the low end trying to build up,” he said.

“They know they’re a struggling party, they know they've got a long way to go, and they can probably afford to start over again, and I'm kind of wondering if that's not exactly what they're doing.”

If I hadn't seen this coming,

If I hadn't seen this coming, I'd be among the current membership losses. Count me as much more alienated now. I've seen too many people get jobs via affirmative action, and then not have any idea that they should also learn to do them.

This isn't mere incompetence, Bob - we have every reason to believe that Annamie Paul is highly competent at what she does. This is, rather, an autocratic assault on the party's core value of participatory democracy.

- and that, I must emphasise,

- and that, I must emphasise, has nothing to do with her ethnicity, her religious affiliation or her gender.

Maybe I've formed an incorrect opinion while looking from the outside on this, but it really seems that from the breadcrumbs I've read Ms. Paul's leadership style has more in common with that of Donald Trump than it does with her predecessor Elizabeth May. I hope that this opinion that I have formed, based on what I've read, is not correct.

I listened with great interest to 'The House' on CBC podcast on Saturday and was impressed by the interviewer and two guests. All took the high road on this topic - acknowledging that while systemic racism is everywhere in our society, and that Green leadership is by no means immune to that, and that that leadership is not as diverse as it needs to be, legitimate criticism of Ms. Paul's leadership must also be permitted.

I’m hanging in there, because

I’m hanging in there, because the other parties have ZERO appeal, but it’s disappointing when there is so much at stake (climate change leading to potential societal collapse).

Re: the last sentence in the

Re: the last sentence in the article. If Annamie Paul is trying to start over with the party, from my point of view, she's going in the wrong direction.

One of the many reasons I

One of the many reasons I decided to become a member of the Green party was the respect and admiration I have for Elizabeth May; her comments and observations were always accurate and to the point, with the environment always holding center stage.

This summer, the backdrop of extreme weather, fires and mass fatalities has already shown that we are grossly unprepared, in spite of governments having had plenty of warning that an unprecedented heat dome was going to roast western North America.

Extreme natural events worldwide ought to be the the campaign focus of the Green Party, the drumbeat of Climate Change urgency!

Under the leadership of A. Paul the Green Party has lost its main focus: Climate Change and The Environment.

Issues such as Just Society: Investing in our Future and Reconciliation or Safety Net: Housing is a Human Right are certainly valid and important but they have equal weight with
The Environment.
This is not my Green Party anymore, and while I certainly don't object to these goals, I don't like The Green Party to be an NDP clone!

I'm still a member but

I'm still a member but totally disappointed in the new leader (who, by the way, was my #1 choice on the ballot). She has totally failed at damage control, and seems to have no understanding that it's even needed. You can't just clam up and hope the Zatzman issue blows away. You can be sure that local candidates will get it thrown in their faces throughout the next election campaign.
Having said that, the party's federal council also seems to misunderstand damage control. The "town hall" they held a few weeks ago failed to answer the fundamental questions. Looking at the Green Fund report, it seems that some very bad decisions were made since the last election.

Perhaps it's just me but it

Perhaps it's just me but it feels like there have been far too many occasions recently of press folks reaching out for comment and being rebuffed or ignored by the party, the leader or both.

If my feeling can be backed up by evidence and this lack of response has increased, for the party it likely falls somewhere on the continuum from not-good to terrible: if ignoring the press is deliberate it's anti-democratic, if not deliberate it's dysfunctional.

Again, just my anecdotal observation, I hope I'm way-off on this.

If there's one thing we

If there's one thing we should all be learning now, its that the climate emergency is a global problem that is fueled by extravagant use of fossil fuels..........and a global economy that fetishizes growth, and ignores armed comflicts around the world that continue to depossess local populations in favour of industrialized elites.

The continued oppression of the Palestinian people by America's proxy in the middle east is an example of how 'efficiently' fossil fools depopulate the earth in favour of industrial agriculture, big military spending and concrete heat islands for the favoured few.

Honestly, I don't see how you can call yourself Green and reduce what is happening in the holy land to 'the conflict in the middle east'. It has more in common with our own residential 'school' solution to indigenous land rights than anything else I can think of.

Whatever else Green should be, it surely can't be parochial....or mired in ancient religious certainties. Annamie Paul needs to rise above that.......has have many Jewish people of clear conscience.

Until that happens.....Canada's 'green' doesn't tempt me.

This type of article should

This type of article should always include reference to Canada’s archaic election system that virtually ensures parties like the Green Party will not make an impact. Two sides of an oil-dominated coin will just continue flopping back and forth until something is changed.

One degree of warming looks

One degree of warming looks bad enough this month. It seems like we've crossed a number of tipping points in the Boreal, the Taiga and the Amazon.

Well, as per the development

Well, as per the development today July 19), much of this has now blown away. The faction in the Party that wanted to do away with their newly elected leader has finally come to their senses and given up on going non-confidence or revoking her membership. The Federal Council meeting that was scheduled for tomorrow has been cancelled. Annamie Paul has spoken to the media today. Last Wednesday she presented a very impressive Shadow Cabinet. Today I received (and responded to) an invitation to join a Knowledge Cluster supporting each portfolio. These are serious efforts in participatory democracy. In contrast, I understand that most Federal Council meetings have been held in camera lately, as would be tomorrow's (this was announced). The mandate of all but three of the current members of this Council ends next month. I'd say good riddance.

As for the article, playing with numbers is easy. Putting them in a meaningful context is a little harder.