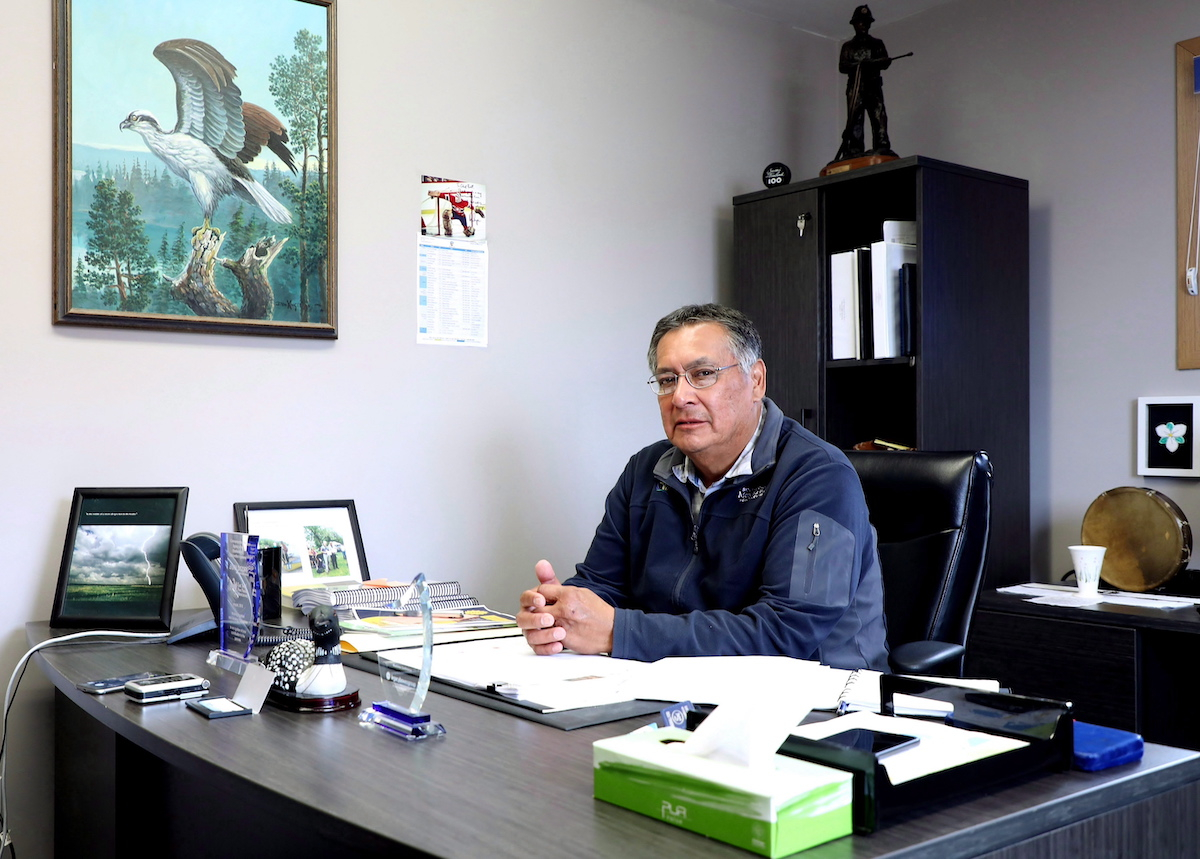 Chief Clifford Bull of the Lac Seul First Nation is seen at the band office in Frenchman's Head, Ont., on Tuesday, April 24, 2018. Photo by Colin Perkel / The Canadian Press
Previous story
Next story

The impact of the dam on the Lac Seul First Nation, traditionally the home of the Obishikokaang Anishinaabeg, was severe. It destroyed the nation’s way of life and many people moved away, Bull says.

“When I talk about total devastation, I mean there were 80 homes that went under … our sacred grounds, campsites, burials were washed up and bones were exposed — skulls were exposed — and that continues to this very day,” he said.

In 1991, the nation filed a claim against Canada in Federal Court, and was granted an initial offer of $30 million for damages. But the nation felt that didn’t come close to justifying the losses and appealed.

Bull’s optimism that fair recompense is now possible stems from a recent precedent-setting Supreme Court of Canada (SCC) decision about how compensation should be calculated.

The SCC decision revolves around Canada’s “fiduciary duty” to Indigenous peoples in the context of reserve land, as opposed to traditional territory. In this case, that means Canada broke its obligation to act in the best interests of the nation by not protecting its reserve land when it chose to flood the reservoir. In Southwind v. Canada, the SCC is essentially tackling the question of how equitable compensation should be calculated when the fiduciary duty is broken.

Construction on the dam began in 1929, and by 1934, the water was rising. More than 11,000 acres, or about 17 per cent of the reserve, were permanently flooded, destroying homes, wild rice fields, and gravesites. The conduct was egregious, “even by the standards of the time,” states the majority decision penned by Justice Andromache Karakatsanis. The decision rejects a lower court’s ruling that $30 million would be adequate and sets new guidelines for calculating equitable compensation for specific claims.

Equitable compensation should have included the value of the hydroelectric project, not just the value of the land, states the decision. With the Supreme Court of Canada ruling in Lac Seul’s favour, Chief Bull says the next step is to secure payment.

The nation is asking “for a little over $500 million,” which takes into account the amount of money made by industry since the dam was built, he says, adding the community didn’t start receiving electricity until the 1980s.

The Supreme Court says when Canada flooded the Lac Seul First Nation's land nearly 100 years ago, it was egregious, "even by the standards of the time,” in a precedent-setting case that sets a new path for how to calculate damages. #cdnpoli

“Money was being made at our expense, and now that the Supreme Court has ruled in our favour, we have a good opportunity here … (to) see some dollars coming back to the First Nation,” he said. “There's no amount of money that can bring everything back … but at least we can get on with the route to recovery.”

A priority is to “build a healing lodge, as there's lots of social issues associated with colonization, oppression, and all the things that have come with it,” Bull said.

Bull said he’d prefer to negotiate with Canada rather than sort out what Canada owes in another court battle.

“We feel that if you want reconciliation, this is a prime example of how you could do that — sitting across from each other and get this issue resolved in a good way for everybody,” he said.

The Justice Department declined comment. Crown-Indigenous Relations and Northern Affairs Canada did not return a request for comment by deadline.

Today, the hydro project built over 90 years ago still stands as the Ear Falls Generating Station, operated by Ontario Power Generation (OPG). Beside it is the Lac Seul Generating Station, built in 2009 in partnership between the nation and OPG. The First Nation owns a 25 per cent equity stake in that station.

The Federal Court determined $30 million to be fair based on what the land would have been worth for agricultural purposes in 1929, the year the dam began construction, plus other non-calculable damages. The trial judge determined Canada’s duty was to pay what it would have if it expropriated the land, under the assumption the project couldn’t be stopped because Canada, Ontario, and Manitoba wanted it done. Further, because the nation had little bargaining power, and Canada could have legally expropriated the land, the trial judge found that realistically, the dam was going to be built. Moreover, the judge found it would have been unlikely for the nation to negotiate a revenue-sharing agreement for the project.

But the SCC said that was wrong to retroactively apply expropriation laws, and because Canada had a duty to act in the best interests of the Lac Seul First Nation, compensation should be based on what Canada should have done, not what it likely would have done if it had followed the law. The decision also says Canada knew there would be a “catastrophic” impact on the nation.

“There are 688 Indians on the reserve, who are helpless to avert this calamity, and who view the future with utter dismay,” wrote H.J. Bury, a “Supervisor of Indian Timber Lands” in 1929, adding that they were being “robbed of their natural resources,” and “driven out of their homes.”

By 1934, between one-quarter and one-third of the houses had to be moved or replaced, estimated another government agent. Over the next five years, further damage was recorded, according to the SCC decision. In 1937, Bury again alerted Ottawa to its “serious breach of faith.”

“I consider that these Indians have been very shabbily treated,” wrote Bury. “(If) it had been a white settlement, no person would have dared to flood the property without paying compensation before flooding took place.”

By contrast, non-Indigenous groups were compensated if their property was within the flood plain of the dam. The SCC decision highlights negotiated compensations with the Anglican Church Missionary Society, which received money for relocating its church and cemetery, and the Hudson’s Bay Company, which was paid for “flowage rights” over “company territory,” according to the decision.

Could decision raise liability for other government projects?

“One of the things this case speaks to is that if there is going to be meaningful reconciliation, the relationship has to be reset in a way that squarely deals with what's happened in the past,” said Elin Sigurdson, an associate with Mandell Pinder law firm, who represented Lac Seul First Nation.

The majority decision emphasizes the importance of Indigenous people’s relationship with the land, and clarifies that the relationship is part of the Crown’s fiduciary duty to Indigenous peoples, explained Sigurdson. In other words, when reserve land is set aside through treaty processes, it is a “fundamental betrayal of the treaty relationship” when Canada uses the land for its own purposes.

“The likely impact of this decision is it raises the liability on Canada for hundreds of specific claims,” explains West Coast Environmental Law staff lawyer Michael Bissonnette.

That could have significant impacts on all sorts of government projects, given that the Trans Mountain pipeline expansion cuts across 400 existing specific claims, as outlined in an open letter from the Union of BC Indian Chiefs.

Confidentiality agreements keep specific details of those claims out of public view, but Bissonnette says it is likely the question of how much compensation is owed that fuels the disagreements.

“The liability for Canada has been raised considerably because of this decision,” he said.

The story was updated to include archival photos.

if you care to really help,

if you care to really help, give money regularly to WCEL, Raven Trust, Eco justice , etc. to fight in court and make the govs listen

What they did caused so much

What they did caused so much harm this goes beyond what the property was worth. The law is supposed to protect people from harm and the flooding itself should be illegal. I would like to see similar projects such as the Site C dam in Northern BC prevented by law. It is no good to destroy lives and say that people were compensated. Peoples lives matter. Right now there is a very good case that Canada has committed genocide and our government has apologized but we keep on doing it. It is not too late to stop the Site C dam project we can just stop it. What happened in the past shows how devastating it will be to those people.

Absolutely!! I believe the

Absolutely!! I believe the economics of stopping Site C are still better than continuing at taxpayers' expense...!!