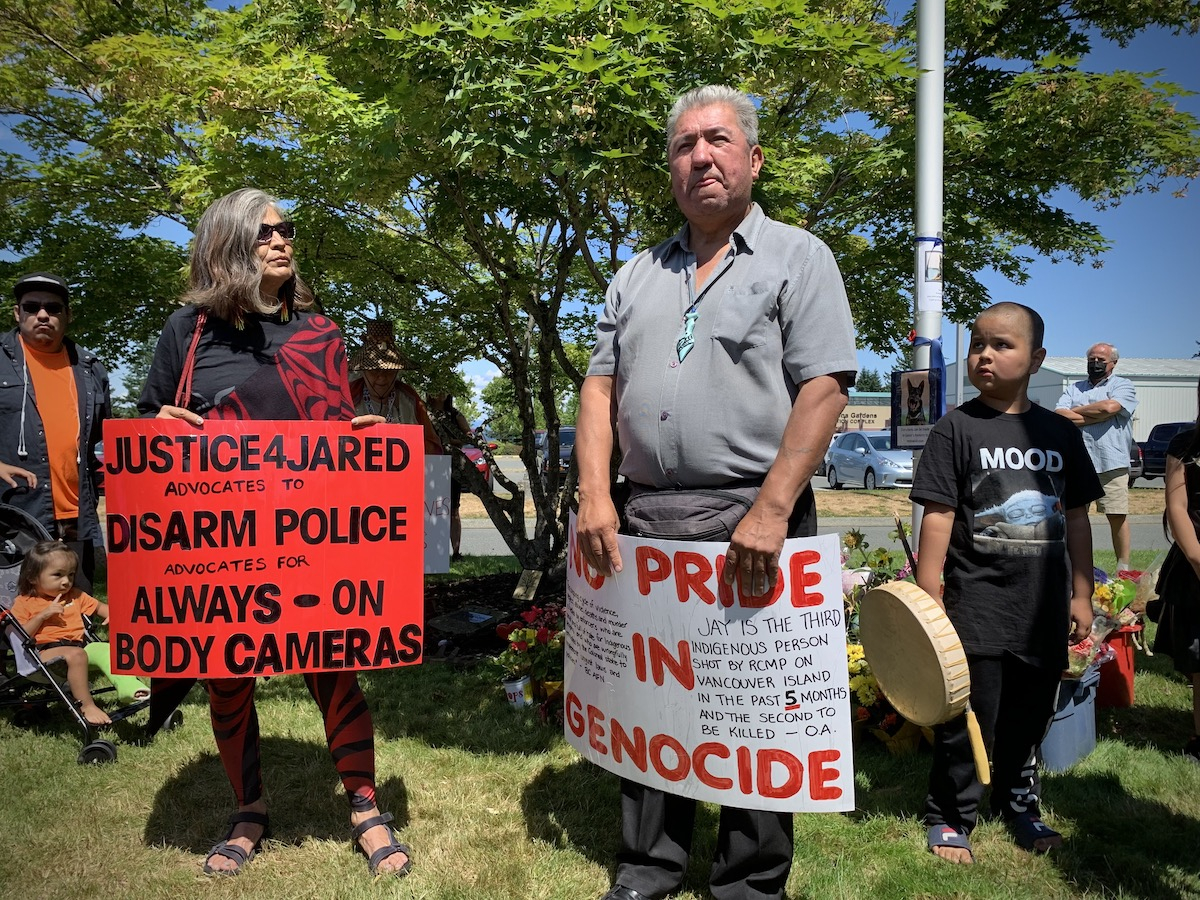 Four warrior cries of mourning echoed through the crowd gathered at a funeral home on Tuesday as the family of Jared Lowndes retrieved his ashes after the 38-year-old father of two was shot and killed by Campbell River RCMP.

Randy Geddes voiced his pain, then sang a spirit song to send his friend onwards as Lowndes' mother, siblings and relatives left the building with a carved wooden urn.

"It's the only way I can express myself after seeing him in that box," said Geddes. "He was my best friend for 26 years."

Lowndes' mother Laura Holland addressed the crowd attending the procession in memory of her son, a Laksilyu Clan member of the Wet’suwet’en Nation. Lowndes was shot after he fatally stabbed a police dog after his car was boxed in by RCMP vehicles at a Tim Hortons drive through on July 8.

"Jared would have wanted us to be loud," Holland said. "We're going to stop Canada from killing Indigenous people with impunity."

"My son is gone," she added. "I can never see his face again, but he’s with me. I’ll take him with me in everything that I do. Every breath I take, I’ll bring my boy with me.”

Lowndes' mother then took her rage and grief directly to the RCMP.

Accompanied by family, Holland entered the detachment doors to confront police while a large crowd drummed furiously and called for "Justice for Jared" just outside the building.

Three RCMP members emerged to speak with Holland who told them they should be ashamed.

"Do you know the terror I feel when I close my eyes at night?" she asked, telling them she sees her son.

“You were created to control and kill Indians and you have not stopped," Laura Holland told Campbell River RCMP Tuesday following the shooting death of her son Jared Lowndes after he killed a police dog during a confrontation with officers.

"You don't understand!" she countered as they attempted to speak with her. “You were created to control and kill Indians and you have not stopped.”

The RCMP has said it cannot speak about the shooting under review by the Independent Investigations Office of BC (IIO).

But on the day of Lowndes death, RCMP said an officer had attempted to stop a vehicle for an outstanding warrant when the driver failed to stop and fled.

Police later located and cornered the vehicle and a confrontation between Lowndes and an officer accompanied by a service dog followed, RCMP said.

The police dog was stabbed and killed, and Lowndes was fatally shot, while the officer was treated for a knife wound.

There was absolutely no attempt to defuse the situation, said Fay Blaney, a close friend of Lowndes' mother and an organizer of the procession.

She questioned if Lowndes, whose car had been rammed by police, could even exit the car if ordered to do so.

"They absolutely did not need to send the dog in, they have zero de-escalation skills," she said.

Lowndes had a four-month-old puppy in car and may have been fighting for its life as well as his own, Blaney said, adding he was the third Indigenous person to be shot by police on Vancouver Island this year.

The First Nations Leadership Council (FNLC) is also calling for justice, accountability, an inquest, and a higher level of oversight in the aftermath of the shooting.

Lowndes, like many Indigenous people, had experienced a cycle of colonial violence, discrimination, and disenfranchisement that left him distrustful of the police, the FNLC said in a statement.

In an essay he wrote before his death, Lowndes described a negative history with police triggered when he was taken from his mother at gunpoint and placed into foster care, the council said, adding he was put in an unnecessary, preventable situation that forced him to act under extreme duress and fear.

"Jared’s death and the subsequent antipathy and hatred shown towards him speaks to a lack of compassion and understanding from the RCMP and public about the intense fear and distrust Indigenous people hold towards police who were historically agents of colonialization, and who are still much a force that maintains colonial violence within a colonial state," said Grand Chief Stewart Phillip, President of the Union of BC Indian Chiefs.

The fact RCMP issued a statement grieving the loss of Gator, the police dog, and conducted a lights and sirens calvalcade in his honour while remaining silent on the loss of Lowndes' life was offensive, and fuelled a surge of racism in the community, Blaney said.

Family and friends were gutted as Lowndes' roadside memorial was repeatedly vandalized, while the pile of flowers commemorating Gator beneath a Canadian flag flying at half-mast at the RCMP station grew.

It was particularly painful when Brian Sauvé, president of the National Police Federation, issued a statement supporting police actions before IIO investigation had concluded, Blaney said.

“We send our sympathies to the Lowndes family and friends following the death of Jared Lowndes last week," Sauvé said.

"If Mr. Lowndes had not, however, evaded police, stabbed PSD Gator and injured an RCMP officer, and instead turned himself in to the courts to comply with a warrant for weapons offenses, he could be alive today."

The Federation releasing information on why RCMP was attempting to stop Lowndes was highly irresponsible, Blaney said.

“They had no business prematurely stating a verdict of the situation when the IIO is still investigating,” she said.

“They're trying to control the narrative.”

Lowndes was good father who wanted the best for his children, Blaney said.

“They're really struggling. This is so hard, because he was so close with his daughters,” she said.“So we’re trying to bring attention to the fact that Jared Lowndes was a loving, caring human being that didn't deserve to die.”

Homalco Chief Darren Blaney attended the event and said Lowndes was connected with the Campbell River First Nation through his daughters, other relatives and friends.

“I think an arrest warrant shouldn't be a death sentence,” Chief Blaney said, adding the negative commentary around Lowndes on social media following the shooting was distressing.

People in Campbell River are too comfortable with racism, he added.

“It’s a sad day for us … our people are in a huge grieving process right now.”

Before departing for the location where the shooting occurred, Holland and her son’s daughter Phoenix laid a bouquet of flowers at Gator's commemoration site.

“We came here to bring flowers for a dead service dog,” Holland said, adding her animal loving, vegetarian son would have wanted them to pay their respects and not harm anyone.

“We didn’t come to deface or to shred anything. We have more respect than that, and my son has more honour than that,” she said.

There’s no way Lowndes would have wanted to kill the police dog, Holland stressed.

“It had to be life or death for him and his own dog.”

I'm fond of dogs. That's one

I'm fond of dogs. That's one reason if I owned a dog, I wouldn't do things like train it to attack people and then set it on them. If the cops are so sad about their dog dying, maybe they should confine dogs' duties to sniffing stuff out. Send dogs to attack frightened, desperate people and they're gonna die sometimes.

This is just like the right wing "support our troops" narrative--they "love" their soldiers so they send them off to die in places they've never heard of so some oil company can make profits, and discard them like kleenex if they come home.

It's not surprising Lowndes tried to get away from the police. From a First Nations perspective, the police are like a dangerous gang--if they are paying attention to you, it means you're likely to get hurt or dead. Of course you want to get away.