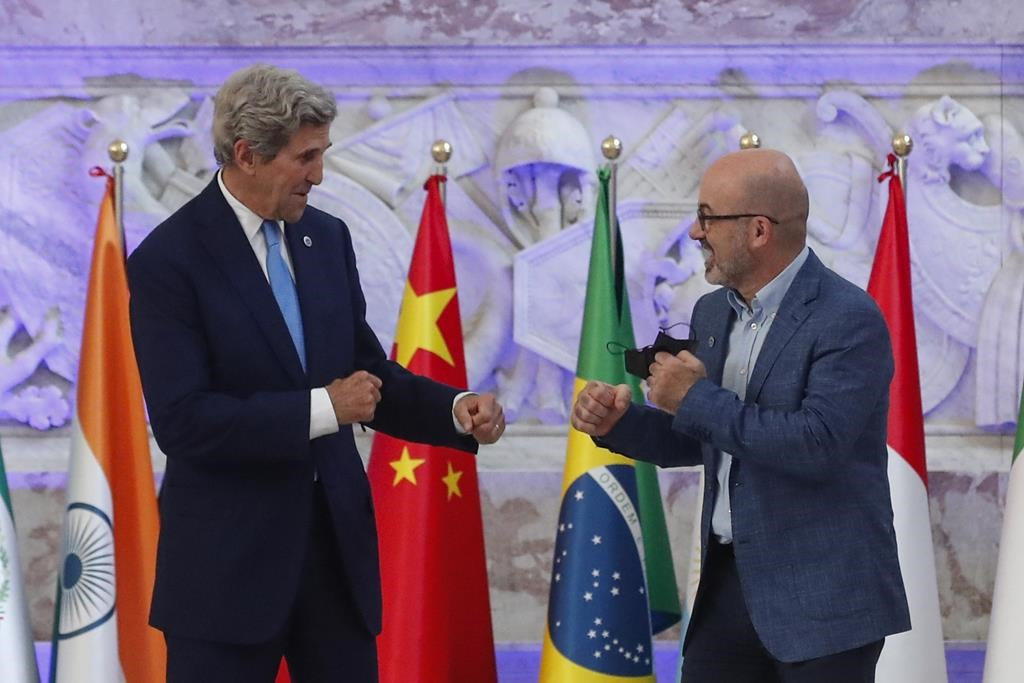 John Kerry, special presidential envoy for climate, and Italy's Ecological Transition Minister Roberto Cingolani in Naples on July 23, where a G20 meeting on environment, climate and energy is under way. Photo by Salvatore Laporta / The Associated Press
Previous story

ROME (AP) — Many of the climate and energy ministers at a Group of 20 meeting hosted by Italy agreed Friday to work toward even more ambitious goals for fighting climate change than those established in the 2015 Paris accords, an Italian official said.

Italy’s minister of ecological transition, Roberto Cingolani, also said during a news conference that concern over last week's devastating flooding in Germany, Belgium and the Netherlands was palpable during the two days of negotiations in Naples. Germany and the European Union are G20 members.

“All began by offering condolences” to the representatives of the affected countries, Cingolani said. Such natural disasters are “changing consciences,” even on a political level, he said.

Climate scientists say the link between extreme weather and global warming is unmistakable, making it clear that urgent action is needed. The G20 nations collectively account for some 80 per cent of the world's gross domestic product and some 60 per cent of the planet's population.

At the Naples talks, the United States, the European Union, Japan and Canada made clear they “firmly intend to go faster than the Paris Agreement by the (end of) the decade, and below 1.5 degrees,” Cingolani said.

World leaders agreed six years ago in Paris to work to keep global temperatures from increasing more than 2 C, and ideally no more than 1.5 C by the end of the century. Scientists say both goals will be missed by a wide margin unless drastic steps are taken to reduce emissions.

“That half degree could make an enormous difference in terms of glacial melting” and other phenomena linked to climate change, Cingolani said.

In any case, Cingolani said, all G20 members agreed to at least meet the Paris goals. “There is no country which puts the Paris accords in doubt,” he said.

The majority of the countries at the conference also backed a goal of moving faster to reduce the use of coal, the Italian minister said, without naming all of the nations.

But during the talks, China, as well as Russia and India, were “more prudent” in embracing more ambitious goals, Cingolani said.

“For those countries, it means putting into question an economic model,” he said.

Exactly what commitment nations, including those which heavily pollute, are willing to make toward fighting climate change will be also on display at the UN climate conference taking place in Scotland in November.

The national leaders of the G20 countries will have the opportunity to thrash out the sticking points that emerged in Naples when they meet in Rome at the end of October.

"But during the talks, China,

"But during the talks, China, as well as Russia and India, were 'more prudent' in embracing more ambitious goals, Cingolani said.
"'For those countries, it means putting into question an economic model,' he said."

This is not very informative. What is it supposed to mean?
https://www.visualcapitalist.com/chinas-energy-transition-in-5-charts/