This Quebecer rewilded his front yard. Will others ditch their lawns? 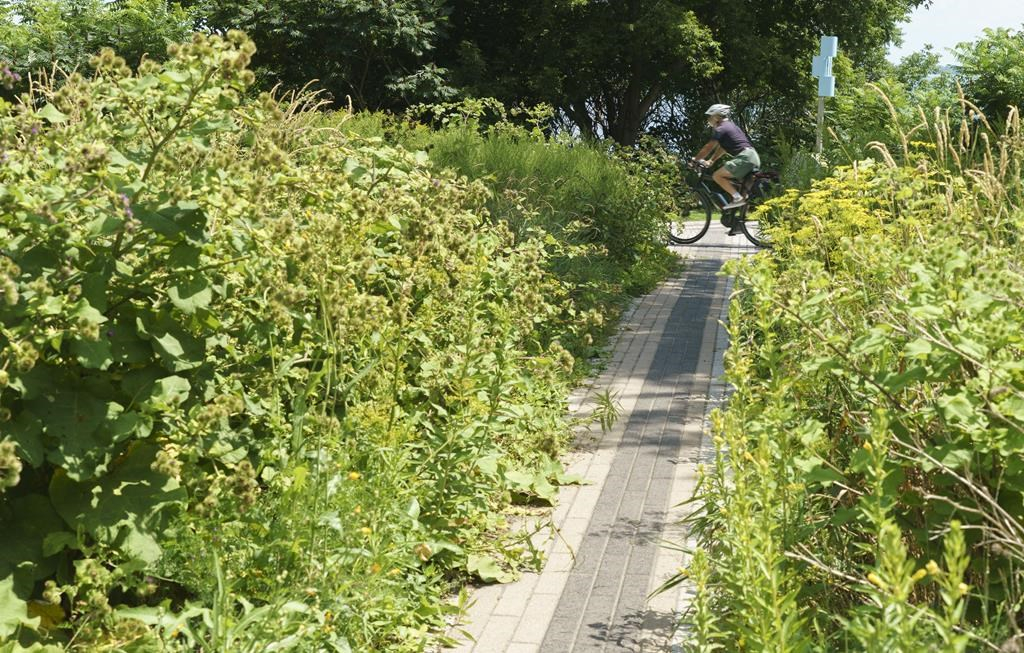 A cyclist rides by a re-naturalized garden in Montreal on Friday, July 23, 2021. Photo by The Canadian Press/Paul Chiasson
Previous story

This year, Dany Baillargeon is committing what he describes as "horticultural disobedience" by letting his front yard grow naturally — despite the risk of running afoul of local bylaws.

The Sherbrooke, Que., resident describes his lawn as "beautiful chaos." Its filled with plants such as wildflowers, clover and long grasses, and it is regularly visited by butterflies, bees and birds.

"I let nature take the space that it deserves," he said in a recent interview.

Ecologists say natural yards have a number of benefits: increased biodiversity, food for birds and insects, less need for water and pesticides, and a reduction of the urban heat island effect. Grass, however, can be resource intensive to maintain and is essentially a monoculture.

Despite the advantages, it is still forbidden to grow vegetables or natural grass and flowers on front yards under local bylaws in many cities, which require residents keep lawns weeded and cut short.

In Sherbrooke, about 200 kilometres east of Montreal, a bylaw forbids vegetation to grow to an "excessive height" or in a way that will cause an "esthetic prejudice" to neighbours.

Baillargeon says enforcement appears to be largely complaints-based. He says he was careful to explain his lawn project to his neighbours, and he adds that while he's received a few disapproving looks, nobody has complained. On the contrary, Baillargeon and his garden have become somewhat of a local sensation, leading to several media interviews and positive online discussions.

The leniency shown toward Baillargeon is an example of how attitudes have shifted, says conservation biologist with the Nature Conservancy of Canada. Dan Kraus says there has been a movement toward more natural spaces in recent years, as people have become more aware of the benefits.

"We're seeing this change in esthetic about what the lawn should be, what we want the places around us to be, and more people thinking about their yards or even municipal parks as opportunities to let more nature into the cities," Kraus said in a recent interview.

This awareness has prompted some cities to change the way lawn-height bylaws are enforced, and some are considering ditching them altogether.

Toronto, for example, dictates that homeowners must cut grass and weeds higher than 20 centimetres, but it allows residents to apply for a "natural garden exemption." A notice on the municipal website, however, states the city is reviewing those rules and may remove the requirement for an exemption.

Other cities, including Montreal, are turning their own green spaces more natural. The Rosemont—La Petite-Patrie borough recently announced it would plant two "microforests" in local parks, while the Verdun borough has been "re-naturalizing" certain parcels of space by holding back the mower in favour of allowing natural grasses to grow.

In a recent statement, the City of Montreal said it was considering other actions to help support its strategy, including prioritizing insects in all its green programs — such as green alleys and community gardens — and by educating people about the importance of pollinators, which are animals that transfer pollen around, leading to healthy seed and fruit production.

Kraus says less-frequent mowing can help cities lower lawn-maintenance costs as well as reduce runoff that enters storm drains and waterways. In addition, he said access to nature — even something as simple as seeing birds — has been proven to improve people's mental well-being.

Baillargeon says he's happy to be doing his own little part to help the environment and change attitudes.

He says he has no desire to criticize those who love their manicured lawns, but he believes it's good to question established conventions regarding what makes a yard unsightly and to accept those who want to do things differently.

His message, he said, is summarized on the sign he installed on his lawn to explain his yard to his neighbours. It reads: "It's the cohabitation that makes it all beautiful."

This report by The Canadian Press was first published July 25, 2021.

By Patricia Lane | News | May 31st 2021
Race Against Climate Change

Easy enough to do if your

Easy enough to do if your yard is isolated from noxious weeds -- which in my case are plentiful. Clover is nice. Some might think dandelions are also nice. "Pigweed" on the other hand is not so nice, as are vines which can easily take over your yard. If you want a vegetable garden, you have to weed it constantly, and in the case of a near desert climate area, requires a lot of water. If you don't water your yard in our climate area, every thing dies.