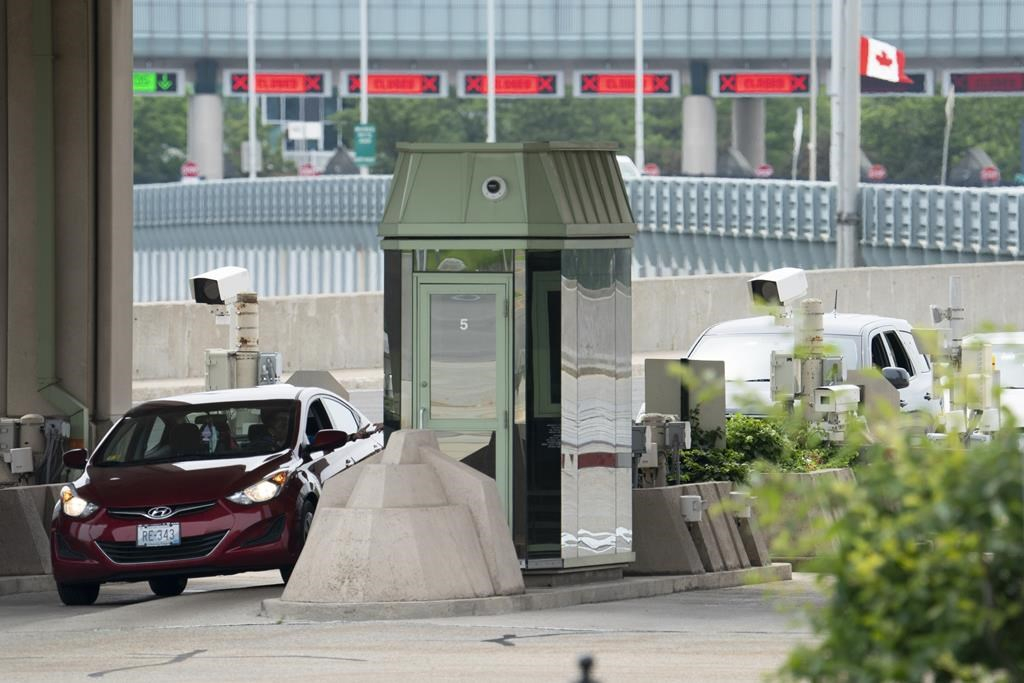 A single line is open for motorists arriving from the US to Niagara Falls, Ont. on Friday, July 16, 2021. Photo by: The Canadian Press/Peter Power
Previous story

WASHINGTON — U.S. President Joe Biden didn't mince words Monday when asked whether his administration will be able to convince more holdout Americans to change their minds about getting the COVID-19 vaccine.

"We have to," Biden declared matter-of-factly after a bill signing event at the White House.

The bigger question — how to go about it — lacks a clear answer.

The threat is unmistakable: the more transmissible Delta variant of the virus is running rampant among the country's unvaccinated population, prompting alarming increases in new cases and hospitalizations.

The seven-day average of daily new cases was 47 per cent higher last week than the previous week, and Delta is responsible for 83 per cent of them, according to the U.S. Centers for Disease Control and Prevention.

Only about 57 per cent of the eligible U.S. population is fully vaccinated, with 66 per cent having received one dose. The reluctant are likely to prove exceptionally stubborn, a recent poll suggests.

Among American adults who have not had the vaccine, some 80 per cent said they probably or definitely won't change their minds, said the survey from The Associated Press and the NORC Center for Public Affairs Research.

And 64 per cent of unvaccinated respondents said they had little to no confidence that the vaccines are effective against variants like Delta, despite overwhelming medical evidence to the contrary.

Alabama Gov. Kay Ivey, a Republican, also spoke frankly last week when she admitted she was largely powerless to change people's minds, and laid the blame for the pandemic's resurgence squarely at their feet.

"These folks are choosing a horrible lifestyle of self-inflicted pain," Ivey said.

The White House isn't going quite that far, but it did take steps Monday to make it clear the crisis is far from over.

Press secretary Jen Psaki confirmed travel restrictions would remain in place against foreigners in a host of countries, including the U.K., Ireland, China, India, South Africa, Iran and Brazil, as well as the 26 Schengen nations in Europe.

That decision comes after the U.S. pointedly chose not to follow Canada's lead and begin easing limits on who is allowed to drive across the country's northern border.

Psaki acknowledged that in a country as politically riven as the U.S., the Biden administration might not be the best messenger — particularly if that message starts to include mandatory vaccine mandates.

"We do not want to look at our objective of getting more people vaccinated through a political prism," Psaki said.

Biden also confirmed Monday that the U.S. Department of Veterans Affairs will be requiring certain members of its front-line medical staff to get vaccinated — the first federal department to impose such a condition.

That move came after a group of health care associations including the American Medical Association and the American College of Physicians called on the U.S. to require that everyone in the health and long-term care sector be vaccinated against COVID-19.

Mayor Bill de Blasio cited the spread of Delta as his rationale for requiring all New York City employees to either get vaccinated or submit to weekly COVID-19 tests, the largest American city to make vaccines mandatory.

On Twitter, Taylor Greene routinely likens mask and vaccination rules to segregation and Nazism. Johnson insists Americans are within their rights to refuse a vaccine. And Carlson continues to call them dangerous, even though prominent colleagues like Sean Hannity have since started urging Americans to get the shot.

"I watch them, I listen, I pay attention — they're misinforming people, they're literally putting people's lives at risk," Newsom told MSNBC.

"People are dying because of the misinformation … time to call it out, draw these lines."

This report by The Canadian Press was first published July 26, 2021.