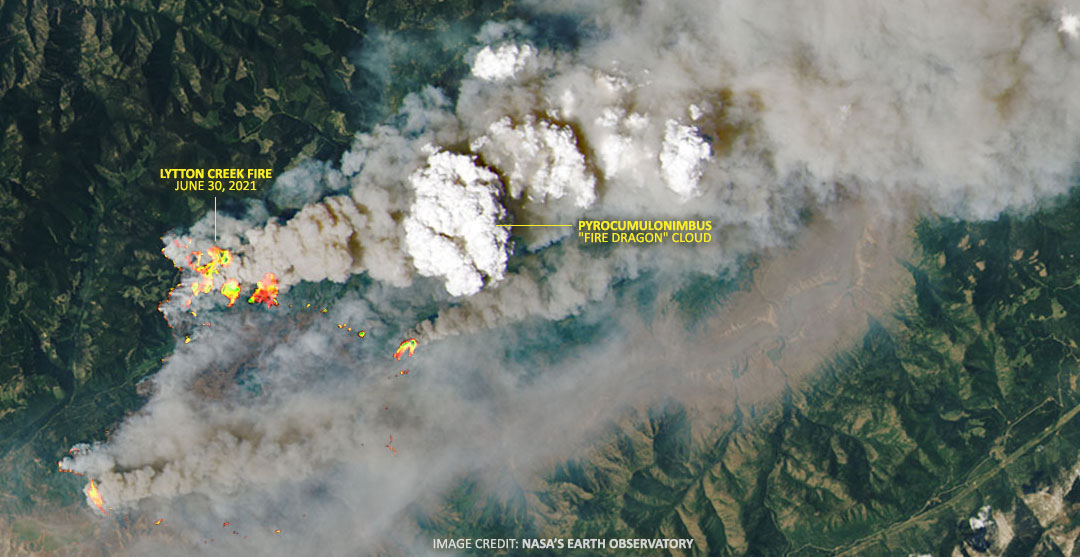 The most extreme wildfires in B.C. are now creating their own weather. Photo by NASA Earth Observatory
Previous story
Next story

This year's wildfire season has exploded across British Columbia. The provincial government has declared a state of emergency. Hundreds of wildfires are burning and thousands of people are under evacuation order. One of those fires, the Lytton Creek wildfire, made international headlines when it burned the village of Lytton to the ground within hours of starting. That particular fire is still "out of control" and is threatening towns to the north.

To illustrate the recent trend in wildfires and how this explosive wildfire year fits into it, I've created a series of charts using B.C.'s official greenhouse gas inventory and the latest wildfire statistics.

This first chart lets you see the wildfire trend over the last three decades.

Back in the 1990s, wildfires emitted an average of five million tonnes of CO2 (MtCO2) per year. That's the short orange bar on the left.

In the following decade, the average tripled to 15 MtCO2 per year.

Historically, B.C.'s primary source of climate pollution was from burning fossil fuels. That's shown by the grey bars on the chart.

But, as you can see, wildfires have surged so dramatically that they've now overtaken fossil fuels as the province's major source of climate-destabilizing CO2.

Where does the current wildfire year fit in to this picture?

It is still July, and yet wildfires have already burned more than 400,000 hectares in British Columbia. That's more than the average for an entire year during the last decade.

Wildfires in the last decade released an average of 150 tonnes of CO2 per hectare burned. Based on that average, this year's fires have already emitted 60 MtCO2. I've added an orange circle to the chart showing this.

That number is likely to rise significantly with the traditional peak of the fire season still to come.

However you slice it, this year is on pace to be another hyper-extreme wildfire year in an ominously rising trend.

The government data also shows a dramatic surge in the most extreme wildfire years.

These are the years that spread anxiety, fear and toxic smoke across B.C. summers.

To illustrate this trend, I've added orange circles to the chart that show the size of the worst wildfire year in each decade.

During the 1990s, the most extreme fire year emitted 14 MtCO2. But this previous worst-in-the-decade fire year would merely rank as a below average year during the 2000s, as overall wildfire burning tripled.

And in that next decade — the 2010s — the worst wildfire year surged to an off-the-charts 199 MtCO2. That was four times as much climate-destabilizing pollution as all fossil fuel burning in B.C. that year. By the time the smoke-choked skies finally cleared in 2018, more than 1.3 million hectares had burned.

The question now looming over British Columbian summers is: How extreme will this year's fires be? Will my region burn? How much smoke will we have to breathe? Will future years continue to grow ever more dangerous?

Climate pollution and land use

There seems to be a growing consensus that surging wildfire is being driven by a combo of human-caused global heating and past land-use choices.

Both problems will likely need to be addressed if we want to put the rampaging fire genie we've unleashed back into its bottle.

Human-fuelled global heating is increasing wildfires in multiple ways, including:

These are turning trees, brush and dead wood into bone-dry kindling. And once a fire starts, the increasingly extreme fire weather conditions of heat plus drought are allowing flames to explode into out-of-control megafires. The most extreme of these wildfires now create their own fire weather in yet another dangerous feedback loop. And if towns are in the path — like Lytton tragically was this year — there can be little or no time to act other than to try to flee.

Sadly, these conditions will keep getting worse until humans stop pumping fossil fuel emissions and other greenhouse gases into the atmosphere. As National Resources Canada warns, "climate change will drastically affect Canada’s forests in the near future. With the rate of projected climate change expected to be 10 to 100 times faster than the ability of forests to adapt naturally..."

Managing forests differently could make them less vulnerable to burning as climate impacts continue to intensify.

And how extreme those climate impacts eventually become will depend on how long humans take to eliminate all sources of climate-destabilizing emissions. That includes eliminating all of British Columbia's climate pollution, too.

As my next chart shows, as our forests are consumed by increasingly out-of-control fires, the amount of climate pollution emitted in B.C. has been rising, not falling.

Back in 2007, the British Columbia government pledged to cut provincial emissions 33 per cent by 2020. Following through on that promise would have seen emissions fall to meet the green bull's-eye on this chart.

But, as you can see, both federal and provincial climate policies have been too weak to meet that target. They haven't even been enough to prevent climate pollution from rising.

Dumping ever more climate pollution into the atmosphere is like fire-hosing gasoline onto wildfires.

Even more troubling, the amount of climate pollution being added to the atmosphere in B.C. is much greater than what this chart shows.

That's because it doesn't include the massive and rising emissions from B.C.'s forests — both from human-caused climate impacts and logged wood.

The government continues to exclude this climate pollution from its climate targets and policies. The reason given is that the forest is re-absorbing all that CO2 each year, meaning the forest and the wood logged from it is "carbon neutral."

But as I wrote in my last article, the government's own data shows that B.C.'s forest stopped absorbing more CO2 than it emitted more than a decade ago. It used to be a big "carbon sink" in the 1990s, helping to slow climate change. But as the forest has been weakened by climate changes and land use, the carbon sink dried up during the 2000s. And over the last decade the forest turned into a "carbon source" — emitting a growing flood of CO2 into the atmosphere.

The government's efforts to keep these huge and growing amounts of CO2 emissions off the official books won't fool the climate.

Climate scientists have long warned that unchecked climate pollution has the potential to push major ecosystems past tipping points, making their continued collapse difficult, expensive or even impossible to stop.

British Columbia's forest is one of the most carbon-rich ecosystems on the planet, storing billions of tonnes of carbon in its trees. Wildfires are burning through increasingly large amounts of that stored carbon, turning it into climate-destabilizing CO2. If we are foolish enough to push the climate past this forest's tipping point, then there are billions of tonnes of CO2 that could be released.

This is how rapid changes in

This is how rapid changes in climate work. Too bad the reductive thinkers can't look at more than one variable at a time, because climate disasters come in cascades.........hotter summers, more lightning, drought, clear cuts that leave easy fuel behind....

As we continue industrialized 'too big to fail' projects that pit the economy against the ecosphere life depends on, positive feedback loops will increase, and CO2 rise become impossible to reverse. Sounds like this may already be the case in BC, if forests, vaunted as carbon sinks, are now emitting more carbon than the oil and gas industry.

So much for Trudeau's idea of planting many trees.........tree farms are also monocultures, slated for early cutting. The percentage of those little tree children who make it to adulthood, growing as they do in a desolation without mothers, is another bit of data that would depress the greatest optimist among us.
Only drastic changes in policy and production will save us now. Maybe. We're at the tipping point....and still too timid to act boldly. Excluding the cost of industrial logging from the carbon deficit we face is the proof.

Thank you the perceptive

Thank you the perceptive article, and thanks to the Observer for being one of the few media outlets that mentions fossil fuels. Reference to them is strangely absent in the vast majority of mainstream articles.