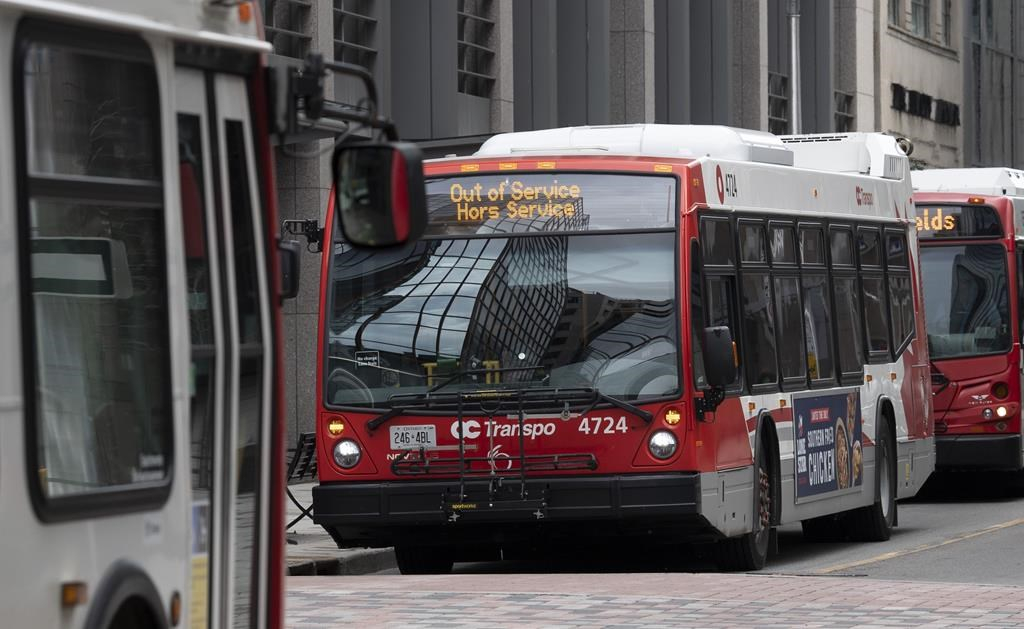 OC Transpo buses line up along a street in Ottawa, on Thursday, April 16, 2020. File photo by The Canadian Press/Adrian Wyld
Previous story
Next story

The head of a federal infrastructure financing agency says he has seen a shift in the types of transit projects cities want to build as they opt for zero-emission buses in lieu of large-scale subways.

Canada Infrastructure Bank chief executive Ehren Cory says the shift mirrors other changes in the planning of projects the agency was set up to help fund like electricity grid projects.

What it means for the financing agency is a rethink of how much of the billions in public funding will go to smaller projects rather than large ones.

The bank has set aside $5 billion in spending in the short-term on transit projects, with about $1.5 billion of that going towards helping transit operators replace aging diesel buses with zero-emission fleets.

"Just to be clear, though, we're quite flexible. And if that ends up being $2 billion for (zero-emission bus fleets) and $3 billion for other things like light rail, that will still be just fine," he said in an interview.

"Our goal is to deploy our capital in the transit space. The outcomes we care about are transit ridership and GHG reduction, and it's up to the owners of those the fleet owners, municipalities, to make the trade-offs."

The Liberals created the agency in 2017 to entice funding from private-sector partners, particularly big institutional investors like pension funds, to stretch available federal dollars and pay for what the government called "transformational" infrastructure projects.

The original vision of large-scale construction projects, though, have given way to what Cory described as more scaled, nimble and flexible projects. In the transit space, it has meant more cities talking about zero-emission buses or smaller light rail to connect to the spine of a subway.

It's not just transit fleets getting money: The agency has signed a financing deal for a fleet of zero-emission school buses in British Columbia. Cory says the agency is deep in negotiations on a similar arrangement that he hinted could be announced in the coming weeks.

So why the interest in these fleets?

The buses themselves don't come with new revenues generated through user fees, which had been part of the original vision of the infrastructure bank: The projects were supposed to be revenue-generating to help the private backer get a return, or profit, on their investment.

But, Cory says, they do come with reduced maintenance and fuel costs over time. Those savings can help the city finance other projects, and repay the agency's investment.

"I think that's why we're getting the uptake we did," Cory says.

"There's a pretty consistent theme that municipalities see this as additive to their efforts and as a place where the CIB can be really helpful to them."

This report by The Canadian Press was first published July 27, 2021.