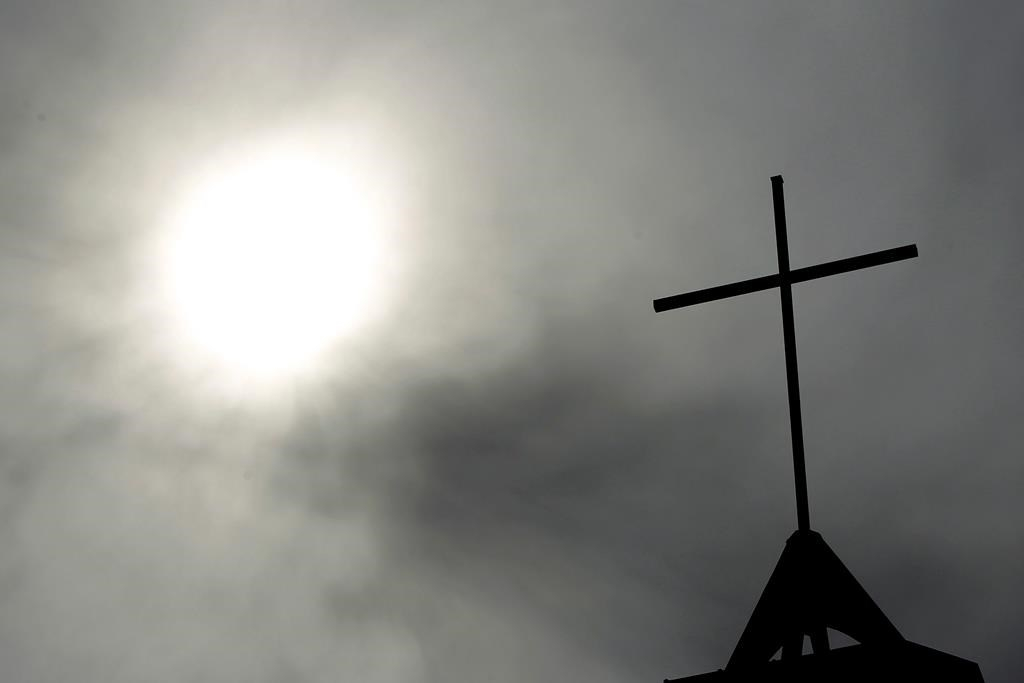 In this April 8, 2010 file photo a cross sits on top of a church in Berlin, Germany. Photo by: Markus Schreiber
Previous story
Next story

WINNIPEG — A Winnipeg archdiocese will no longer allow a Catholic priest to preach publicly or teach after he suggested during a sermon that residential school survivors lied to get settlement money.

“I completely disavow his words.”

The priest, Rhéal Forest, made the comments during a handful of masses at St. Emile Catholic Church in Winnipeg earlier this month. Forest was filling in for the parish’s regular priest.

During one service, Forest said he worked in the north for 22 years and believes students enjoyed their time at residential schools. He also suggested survivors claimed they were victims of sexual abuse to get settlement money.

“If they wanted extra money, for the money that was given to them, they had to lie sometimes,” Forest told parishioners.

The services were broadcast on social media through the church’s Facebook page. CBC News captured the videos before they were deleted earlier this week.

Forest also said if students were abused, it wasn’t by priests. He suggested it was by night watchmen.

Forest also claimed that the media is evil and run by freemasons.

"“If they wanted extra money, for the money that was given to them, they had to lie sometimes,” Manitoba #Catholic priest Rhéal Forest says of residential survivors.

“I and, I hope, more and more people will come to that place of completely disavowing that kind of thinking ... that kind of racism,” the archbishop said.

LeGatt asked for forgiveness and said the diocese, especially church leadership, has a responsibility to understand the truth of what happened at residential schools. He called on all Catholics to join him on the journey of reconciliation.

The priest’s comments come as the country has been forced to face its history with Indigenous people. In recent months, unmarked graves have been located at the sites of numerous former residential schools across the country.

Survivors told the Truth and Reconciliation Commission stories of abuse they endured while staying at the schools, including instances of starvation and harsh discipline. Nearly 38,000 claims of sexual and serious physical abuse were submitted as part of the independent assessment process of the residential school settlement agreement.

At the time of the commission’s final report, more than 40 former residential school staff members were convicted for abuse.

Mounties in Manitoba said earlier this week that officers there have been investigating abuse allegations at Fort Alexander Residential School, northeast of Winnipeg, for more than a decade. No charges have been laid.

Religion is such a sweet spot

Religion is such a sweet spot in the realm of human delusion, so defining and overarching that it naturally spawns rival offshoots like the freemasons, also from medieval times, which explains why this uncharacteristically frank priest so confidently links them with the media. This particular, secretive old boys' club originally consisted of cathedral builders, so imagine spending your whole life building one of these magnificent structures, and then this one guy just strolls in and takes over. if you look up freemasonry on Wikipedia there is a picture of a group in 1902 in their typical dress of the time, which is the same as catholic priests! So just more wannabe god types. What IS it with men?
Again I say, at what point do we, as a modern society, kick all these egomaniacal guys and their massive pretensions to the curb along with their stupid, MANufactured creeds?

So, from the broad lexicon of

So, from the broad lexicon of available English verbs, who made the choice to use "grovel"?

A quick search of other outlets that repeated this CP story indicate that the selection likely didn't come from CP.

I want to continue my support the N.O. but the ongoing editorial choices being made are over-exercising my eye muscles (rolling).

The indictment in the story stands alone without the Sun-chain quality headline, IMO.

Well let's face it, catholic priests are full-on pariahs at this point, so the image of one of them groveling is certainly exaggeration in the context of the literally otherWORLDLY ego involved, but it's also very much what many of us would pay to see at this point.

Representatives of the roman

Representatives of the roman catholic church must not say even one more word about any of this until they have committed to and ensured that their so-far-useless promises of financial compensation are honoured. Until then, every single survivor and family member of the atrocities perpetrated by these allegedly "christian" people remains unserved and disrespected.

After spending their millions beautifying their churches/buildings, and ensuring all the old white men in ermine are so well-fed (just look at their photographs) it's time they looked around and choose to Man Up. Whether they do so without spending even more on court cases remains to be seen.

What is Jesus thinking about the selfish old men running this church today?

I appreciate your righteous

I appreciate your righteous indignation but you weakened your own, and all of our common humanity by inserting the deity at issue here, in the present tense no less, imbuing him (ALWAYS a HIM, have you not noticed that, proof positive that the idea of a god is MAN-made) with "thinking" even, a mythical figure who is the underpinning of the entire Christian myth. MYTH being the key word.
This is the usual rationale, the usual cherry picking Christian habit where, but, oh, this isn't YOUR version? What more will it take before people can admit to being duped? How much more monstrosity in the name of this first and worst big lie? You believers in a god are all JUST as complacent as this Catholic priest, as certain, as entitled, and as deluded.

So 150,000ish total people went through the residential schools. Many of those aren't even alive any more. Out of what remains, we have 38,000 claims of sexual and physical abuse. Lots of people presumably were abused but haven't come forward. We're looking at a ridiculously huge proportion here--was there anyone who went through these bloody concentration camps WITHOUT being abused?

Valid question. What Christopher Hitchens said about the Catholic church comes to mind: "no child's behind left." Which is beyond sickening. It's like the actual Nazis in the actual concentration camps though, some perpetrators are bound to still be alive when you consider how recently these houses of horror closed. So like the Nazis, they should be hunted down and brought to justice. Meanwhile, remove the tax exemption for churches, and start picketing the Catholic church, or any of them really, they're all enablers of a profound, dangerous lie. I belong to the Calgary Atheist Society and am going to suggest the group become more political and strident even. It's like the anti-vaxxers, at some point you have to call them out for the threat they are. Obviously you can't de-program millions of deeply indoctrinated people, but we can at least marginalize religion back into the private realm where it belongs. (My husband suggests they keep it in the basement with their porn, but, whatever appeals to you....)
If we imagine that separation of church and state is still intact, and therefore somehow publicly benign, keep in mind that here in Alberta evangelicals are in charge, and U.S. is actually teetering near the edge of theocracy as they pummel their democracy. Christianity has become very aggressive politically since the Reform party and the Tea party took over the right wing.

I'm not sure if you meant to

I'm not sure if you meant to cast doubt on the survivors' accounts or were just sincerely wondering how these institutions went so far wrong, but I have just one comment: a single staff member who sexually abused the children had access to dozens of children at a time and, over a period of years, an even larger number. I'm pretty sure most staff members didn't commit sexual abuse, but those who did operated with impunity, often for years, and had many, many victims. Have a look here https://nationalpost.com/news/canada/why-so-many-sexual-predators-at-ind... and here https://broadview.org/at-13-willie-blackwater-stood-up-to-his-abuser-at-...