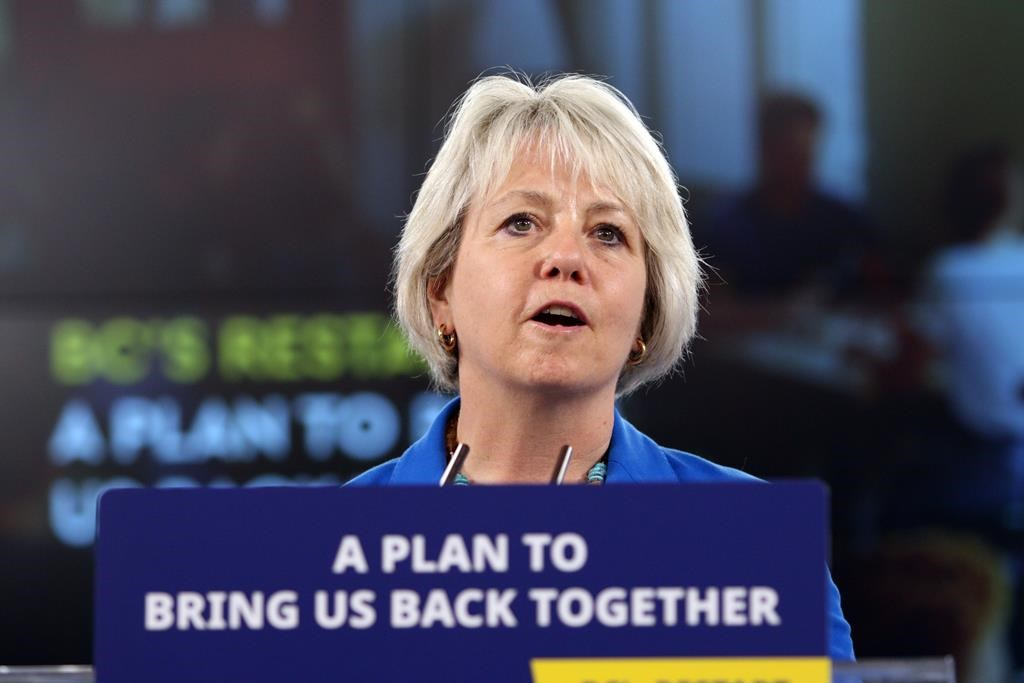 Provincial health officer Dr. Bonnie Henry talks about B.C.'s plan to restart the province during a news conference at the legislature in Victoria on May 25, 2021. File photo by The Canadian Press/Chad Hipolito
Previous story

Officials have reinstated some COVID-19 restrictions in part of a health region in British Columbia's Interior after an outbreak led to rapidly spreading infection driven primarily by unvaccinated residents between the ages of 20 and 40.

The face coverings are recommended outdoors if residents are unable to physically distance, but they will be optional for children under the age of 12 when they're attending summer camps or similar settings.

A number of businesses in the central Okanagan have been forced to close due to illness so enforcement involving bylaw officers, WorkSafeBC and local officials will be increased as they follow up with establishments where three or more cases of COVID-19 have occurred, Pollock said.

Non-essential travel to the area is being discouraged unless visitors are fully vaccinated, and residents should be planning events outdoors rather than inside whenever possible, she said.

Nightclubs can remain open with up to 10 people seated at tables, but dancing and socializing between tables is not be permitted. All venues will be allowed a maximum of 50 people or 50 per cent of their total capacity.

"Any events scheduled during this outbreak in the central Okanagan should have a COVID-19 safety plan in place," Pollock said.

Provincial health officer Dr. Bonnie Henry said the Kelowna area is most concerning in the central Okanagan as the Delta variant spreads among socially active young people in the region, where 113 cases were reported Wednesday after 95 cases on Tuesday.

Fraser Health, the largest region in the province, reported 35 new cases on Wednesday, while Vancouver Coastal had 26, Northern Health had two and eight cases were diagnosed in the Island Health region, the Health Ministry said.

Some restrictions back in one area of #BC as COVID-19 cases rapidly rising. #BCPoli #COVID19

Henry said a "good proportion" of the province's 240 cases in the last week have been in the central Okanagan so targeted measures were necessary to protect more vulnerable people, businesses and other communities.

The need to take a few steps back as part of the province's first such targeted approach should send a message about the importance of immunization, especially as more transmissible variants can lead to clusters among people who are not vaccinated, she said.

Health Minister Adrian Dix said a test positivity rate of 6.8 per cent in the Interior Health region is the highest in the province by far, compared with 0.9 per cent in Vancouver Coastal, one per cent in Fraser and Island Health and 1.6 per cent in Northern Health.

As for vaccinations, 74.2 per cent of eligible people over the age of 12 have received their first dose in Interior Health compared with 80.8 per cent for the entire province.

"We need to take this opportunity to raise immunization rates, and we're going to make it easier to do so," Dix said, adding new pop-up clinics would be announced for the central Okanagan.

B.C. lifts most COVID restrictions as vaccines work their magic