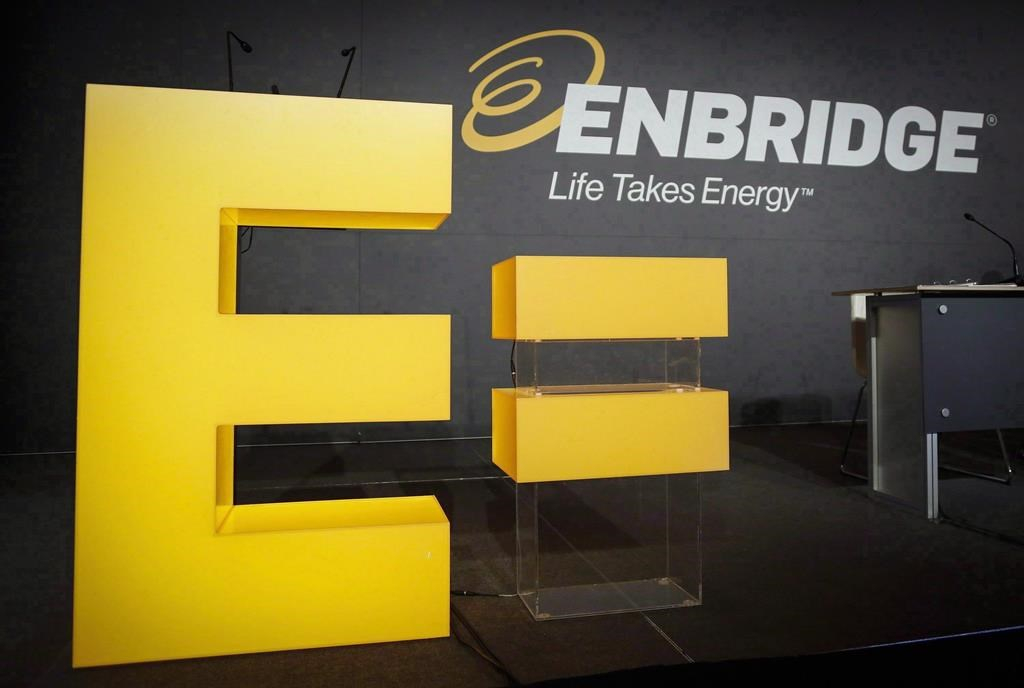 Enbridge company logos are seen at the company's annual meeting in Calgary, Alta., Thursday, May 12, 2016. Photo by: The Canadian Press/Jeff McIntosh
Previous story
Next story

CALGARY — Enbridge Inc.'s Line 3 pipeline replacement is on track to be in service by the end of the year despite ongoing protests and recent court challenges, the Calgary-based company said Friday.

The $9.3-billion project — which is expected to add about 370,000 barrel per day of crude oil export capacity from Western Canada into the U.S. — was handed a victory last month by the Minnesota Court of Appeals, which affirmed the approvals granted by independent regulators that allowed construction on the Minnesota leg to begin last December.

In a conference call with analysts Friday, Enbridge chief executive Al Monaco said in spite of the recent legal challenges, Line 3 remains on schedule and is now 80 per cent complete.

"Construction-wise, we're tracking to schedule," Monaco said. "We're moving along well and continue to work on water crossings. All that to say, we're on track for a Q4 in service."

The Line 3 replacement will carry oil from Alberta to Enbridge's terminal in Superior, Wisconsin. The Minnesota leg of the project — the last section remaining to be completed — has been met by protests along the route, with more than 500 demonstrators having been arrested or issued citations since December.

Opponents of the project — including Indigenous groups the White Earth Band of Ojibwe and the Red Lake Band of Chippewa, as well as environmental groups like the Sierra Club and Honor the Earth — say the Line 3 expansion will accelerate climate change and also poses a risk of oil spills in environmentally sensitive areas.

The Line 3 expansion is a critical project for Canada's energy sector, which has been hamstrung by a lack of pipeline infrastructure in recent years. An IHS Markit report from December found that delays in the expansion of the export pipeline capacity have contributed to lower prices in Western Canada, representing a loss of $17 billion for the crude oil industry over the last five years.

Between the two projects, the total export addition of nearly one million bpd is expected to account for Western Canada's oil export needs at least through the first half of the decade

"Our understanding of the market here in Western Canada is there's a significant amount of heavy crude waiting to come to market from producers that hasn't been started up yet," Monaco said. "There are some very close-to-completion brownfield projects with producers that would come to market very quickly, with sufficient egress."

#Enbridge reports it expects #Line3 to be up and running by the end of the year, despite court challenges. #energy #pipelines

Enbridge said Friday its net income attributable to common shareholders dropped 15 per cent in the second quarter despite rebounding demand for energy as economies recover from COVID-19.

The decrease was partly attributable to reduced foreign currency gains.

Revenues surged nearly 38 per cent to $10.9 billion from almost $8 billion in the prior year quarter.

Enbridge reaffirmed its 2021 financial guidance for earnings before interest, taxes, depreciation and amortization of between $13.9 billion and $14.3 billion and distributable cash flow of $4.70 to $5 per share.

With files from The Associated Press