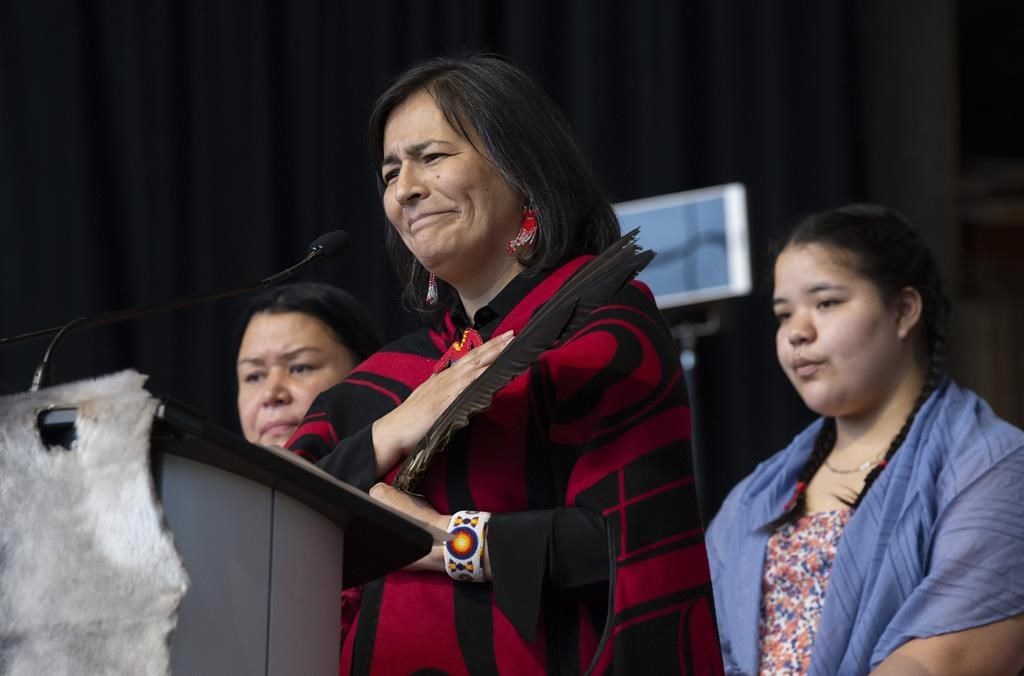 Michele Audette speaks during ceremonies marking the release of the Missing and Murdered Indigenous Women report in Gatineau, on Monday, June 3, 2019. File photo by The Canadian Press/Adrian Wyld
Previous story
Next story

Michèle Audette, one of the commissioners for the National Inquiry into Missing and Murdered Indigenous Women and Girls, is among the five newest members of the Senate.

Audette was named as a senator for Quebec as part of a raft of appointments made public by the Prime Minister's Office.

Audette was one of the five commissioners responsible for the inquiry, which delivered a final report to the federal government in June 2019 that included 231 calls for justice.

Prior to that, she had been president of the Native Women's Association of Canada, and in 2015 unsuccessfully ran for the federal Liberals in the Quebec riding of Terrebonne.

Two others with political experience were among those named on Thursday: Banff Mayor Karen Sorensen, who planned to step down from the role this year after three terms in office, and Clement Gignac, chief economist at iA Financial Group who once served as a Quebec cabinet minister under former premier Jean Charest.

Also receiving appointments were David Arnot, the chief commissioner of Saskatchewan's Human Rights Commission and a former federal treaty commissioner for the province, and Amina Gerba, a Cameroonian Canadian entrepreneur whose work has fostered greater business ties between North America and Africa.

Prime Minister Justin Trudeau's office says all will sit as independents in the upper chamber.

In a statement, Trudeau says the combined experiences and perspectives the news senators bring to the job should strengthen the Senate and help shape the country's future.

With the appointments, Trudeau now counts 60 senators that have been named on his advice and passing three prime ministers on the appointments list: Louis St-Laurent, Brian Mulroney and Stephen Harper.

The appointments are also the first approved by Gov. Gen. Mary Simon, who was installed as viceregal on Monday.

Constitutionally, the Governor General appoints individuals to the Senate, but by convention the appointments are made on the advice of the prime minister.

Trudeau has used an arm's length advisory board that vets applicants and recommends short lists of potential Senate nominees, which the Liberals argue creates an independent, merit-based selection process.

But Trudeau's appointment of Sorensen to represent Alberta ran headlong into the province's system of holding elections for Senate nominees that are then presented to the prime minister to consider.

Premier Jason Kenney said he told Trudeau during a July 7 meeting in Calgary that the province would soon be holding the election and the legislature hoped that the prime minister would hold off filling Senate vacancies until after the vote.

Kenney's statement blasted Trudeau for appointing a "hand-picked representative" for Alberta without waiting for the provincial vote.