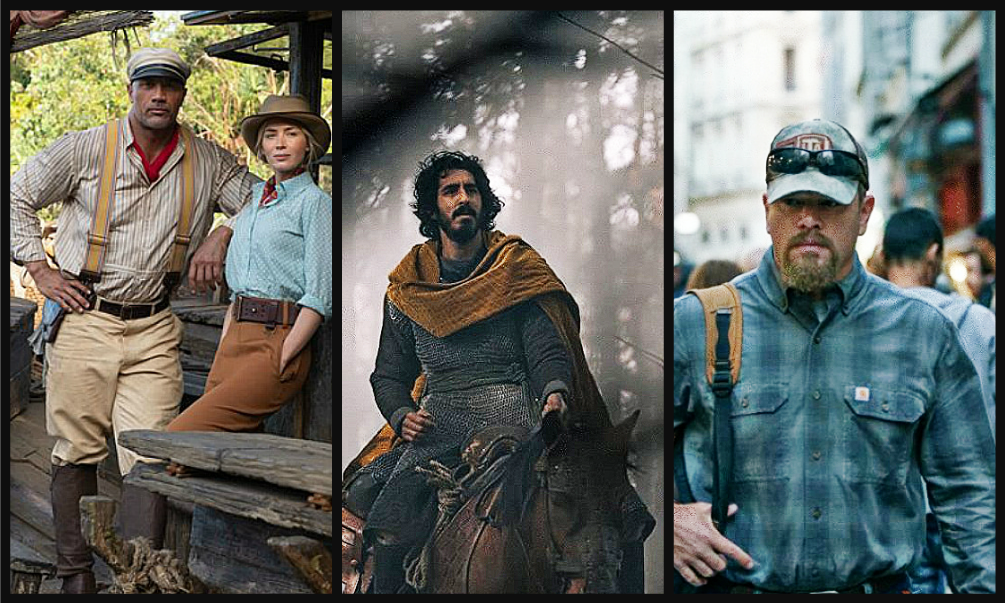 Plus two to enjoy at the newly reopened Vancity Theatre.
Previous story

More signs that normal is inching back to the movie theatres. The big films are coming around. There's been one a week for a while; this week there are three.

Also VIFF's theatre, The Vancity, is reopening today. It has taken much longer than the rest because of renovations that the operators, in their press announcements, are extremely proud of. There's now a second, smaller auditorium, perfect for specialized films for smaller crowds, although any could be shown in either.

I have reviews of two of the new arrivals today and also those three big titles.

JUNGLE CRUISE: Disney mines another of its theme park rides (Pirates of the Caribbean having become worn out as a movie series) and it looks and feels like another winner. It's lighthearted, colourful, quite often funny and laced with memories of many summer action films of years past. I particularly got an Indiana Jones vibe off it. And the snappy verbal sparring between Dwayne Johnson and Emily Blunt is delightful. Older fans will have seen it before in the movies. Bogart and Hepburn? Michael Douglas and Kathleen Turner? It's always a treat when it works.

Blunt plays an English botanist who hires Johnson, the captain of a rundown boat, to take her far up the Amazon River in search of a tree with magical medicinal properties. Not many believe in it or in the legend of the Conquistadors who found it. A German prince, played by Jesse Plemons, believes. He's looking for it to help win the First World War, which was going on at the time. He follows them upriver in a U-boat, and bit by bit, what should have been a simple story gets dense and preposterous. He, for instance, takes directions from bees that land on his map. Conquistadors (Édgar Ramírez plays their leader) come back alive from a curse a local chief had put on them, and an unbelievable connection is also revealed. Not much is made of the evils of colonialism, the reason for the curse. There's a gay character, though (in a Disney film?) and there's the fun of the trip, of the rich visuals and especially in the banter-cum-attraction of the two leads. (International Village, Marine Gateway, many suburban theatres and on Disney+ Premier Access.) 3 out of 5

THE GREEN KNIGHT: You have to be a fan of classical literature and storytelling to enjoy this one. And be assured there is a lot to enjoy. Just take this caution: It is slow and meditative. Visually dazzling, but not exciting with action. It draws on a couple of 14th-century poems (long, elaborate ones), which elevate Sir Gawain, one of the less-demonstrative knights at Arthur's round table, to a starring role. Dev Patel plays him confidently.

The Green Knight rides in and challenges anyone at the table to a duel, with the proviso that if he loses, even if he dies, he can get a rematch in a year and payback by inflicting the same injury. Gawain takes his challenge and chops off his head. The knight picks it up and slinks away. So a year later, Gawain is off to find the chapel designated for that second duel. Most of the film is a picturesque road trip in search of the obscure “green chapel,” but it is also a story of a young man finding out what kind of person he is. He's encouraged by his mother, deceived by a highwayman, invited to stay overnight by a lord (Joel Edgerton) and tempted by his wife (Alicia Vikander).

There's a talking fox, giants on the horizon and an old blindfolded woman whose symbolism isn't explained at all. The film, written and directed by David Lowery, is metaphorical about subjects like honour, self-respect, Christians versus pagans, and more. A definite counter to the usual summer fare. (5th Avenue, Marine Gateway, International Village and a few suburban theatres.) 3½ out of 5

STILLWATER: That's in Oklahoma, but almost all the movie takes place in Marseilles, France, thereby setting up a contrast of culture, politics, and more. Most of it is fleeting, though, in a few lines of dialogue only. Matt Damon plays a “roughneck” oilworker who didn't vote for Trump because he's a former prison inmate. He won't say if he would have, though, but he does own two guns.

He travels to France where his daughter (Abigail Breslin) has been in jail for the last five years for the murder of a roommate/girlfriend. She insists she didn't do it, and has new information about a man named Akim, who she had met around that time. Dad goes to find him. That's not easy. He only has a name, can't speak French and has to go into one of those menacing immigrant neighbourhoods to look for him. Luckily, a woman he meets after helping her daughter helps him.

She's a stage actor and a single mom with a liberal outlook (that contrast again) played by Camille Cottin, who so impressed in the Netflix series Call My Agent. The two do find the truth; it's not what they expected, but the quest has kept our attention. The story is loosely inspired by a real case that was in the news and does feel improbable at times. Director and co-writer Tom McCarthy won an Oscar for Spotlight, also about an investigation. He again handles that very well. Less, though, with the human connections. (International Village, 5th Avenue and some suburban theatres.) 2½ out of 5

EMA: Here's the most highlightable film of the week, not just for its artful construction, but its very absorbing story. It comes from Chile, from director Pablo Larraín, whose next one is about Lady Diana and has just been announced as the opener in September at the Venice Film Festival. Before that one makes waves, we have this incendiary tale with a twisty and very clever story.

Ema (played by Mariana Di Girolamo) is highly changeable. She was a dancer, quit and then got back to it because she fell in love with a choreographer (Gael Garcia Bernal). Now she wants out of that marriage because he hasn't been able to give her a child. They adopted one, but she gave it back when the boy started a fire. Now she sees him about town with his new parents and is in a deep funk. She has loud arguments (some in public) with her choreographer-husband, who she calls a “psycho” and a “human condom.” He retorts, “Nobody likes you.” She starts an affair, and there's a twist ending that takes on a surprising motive. This is a lively, stylish and almost hypnotic film. The acting is tops. (Vancity Theatre.) 4 out of 5

MANDIBLES: Bill and Ted may be universal. Here are two French counterparts, Jean-Gab and Manu (played by David Marsais and Grégoire Ludig). They do a small job (a delivery) for a criminal, hot-wire a car and find a giant fly in the trunk. They figure there's money to be made with it. They decide to train it, so they can commit robberies with it or put it on show and charge admission. Nutty? Sure. The whole film is amusing with its absurdity and that's typical of writer/director Quentin Dupieux, whose best-known film is Rubber, about a murderous automobile tire.

One of the pair is mistaken as an old high school acquaintance by a woman who invites them to stay overnight at a house she shares with two others. One of them, because of an old injury, talks so loudly that it sounds like she's angry and yelling. Very funny, played by Adèle Exarchopoulos, famous from Blue is the Warmest Colour. They have trouble keeping up the pretence, hide the fly and pretend it's a dog, and then get a real one to prove it, and deal with a very funny surprise. The film is silly, but fine good summer entertainment. (VanCity Theatre.) 3 out of 5