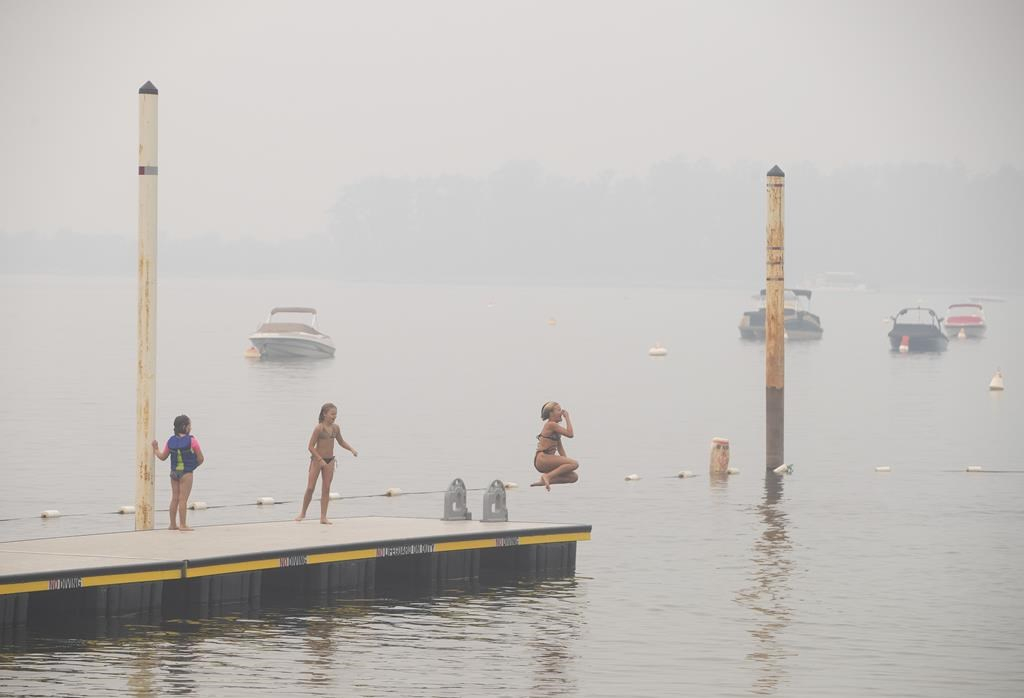 Wildfire smoke fills the air and obstructs the view of the mountains as people continue to take part in outdoor activities in Sicamous B.C., on Thursday, July 29, 2021. File photo by The Canadian Press/Jason Franson
Previous story

British Columbia is gearing up for another heat wave this weekend by opening more cooling centres and redeploying health-care workers as temperatures are expected to soar.

Health Minister Adrian Dix said Friday that while more staff will be shifted to emergency rooms, work is underway to keep hospitals cool while workers in long-term care facilities ensure people are hydrated.

"Managers have stepped up to work in hospital ERs to make sure people who need immediate medical attention get out of ambulances and into care as quickly as possible," Dix said, noting residents in parts of the province are already experiencing poor air quality due to smoke from wildfires.

He called on citizens to "step up" during the heat wave by checking on isolated people including seniors and those living with chronic conditions.

Dix also said jobs were being posted Friday for 85 paramedics and 30 dispatchers following complaints late last month of 911 callers waiting for hours, when the B.C. Coroners Service recorded at least 569 deaths due to extreme temperatures.

"The plan is in place to continue to improve and meet this extraordinary demand for ambulance services," Dix added.

The number of deaths linked to the last heat wave is preliminary and subject to increase as additional deaths are recorded, chief coroner Lisa Lapointe said in a statement on Friday.

"Anecdotally, our coroners reported that many of the deaths experienced were amongst those living alone in private residences with minimal ventilation," Lapointe said. "We will continue to gather more detailed information to inform safety strategies."

Environment Canada has issued a heat warning that spans much of the province. Temperatures this weekend are not expected to reach the record highs of last month, when the mercury hit 31.7 C in Vancouver and a Canadian record of nearly 50 C in Lytton before a wildfire wiped out most of the community.

Public Safety Minister Mike Farnworth said the province will open civic centres that would otherwise be closed so people can escape to a cool place if they lack air conditioning and social media posts will provide updates on available resources. Information on illnesses related to heat waves will also be available online, he said.

#BC readies response before second #HeatWave.

Farnworth said local governments are being encouraged to let people know where cooling centres will be located, especially to help those who have been forced to leave their homes due to wildfires in parts of the province.

"Over the past week, Emergency Management BC has been working with local communities and First Nations to ensure they have the support that they need," he said, adding the province would pay transportation costs for people to get to cooling centres in communities where scheduled or reasonable transit doesn't exist.

Sarah Henderson, an environmental health scientist with the BC Centre for Disease Control, said seniors who live alone or those who have chronic physical or mental health conditions are particularly vulnerable to dehydration, heat stroke and heat exhaustion so those around them should watch for symptoms like dizziness, fainting and confusion.

"We know from the global literature, and from heat waves that have occurred elsewhere, that one of the most dangerous things during a heat wave is social isolation," she said.

"When we have passive indoor heat it can become dangerously overwhelming without people even realizing it," Henderson said.

It's important to ask when someone last drank water and about the colour of their urine, which if it's too dark or they have not produced enough, could be a sign of potentially dangerous dehydration.