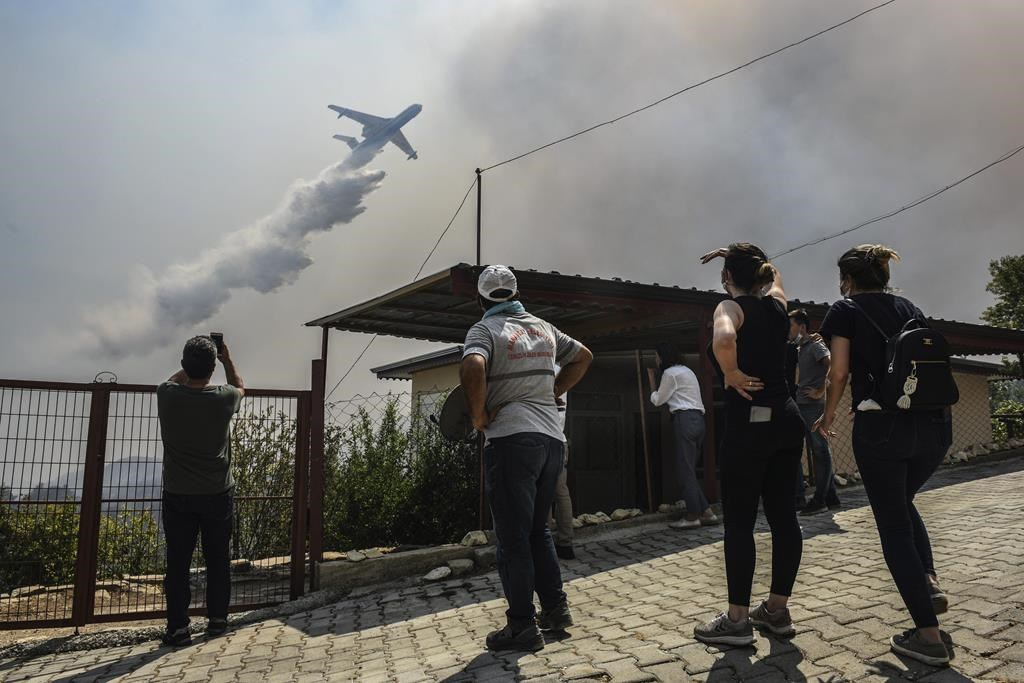 Firefighters were battling to control blazes that tore through forests near Turkey’s beach destinations for the sixth day running on Monday, as water-carrying planes from the European Union prepared to join the containment efforts.

The fires burning in parched conditions and strong winds since Wednesday have left eight people dead and forced residents and tourists to flee vacation resorts in boats. Many villagers lost homes and farm animals while a thick yellow haze hung in the air in the affected regions.

Agriculture and Forestry Minister Bekir Pakdemirli said late Sunday that 119 fires that broke out in 32 provinces since Wednesday have been extinguished. Crews were still tacking seven fires in the coastal provinces of Antalya and Mugla that are popular tourist areas, and in Tunceli, southeast Turkey.

The EU announced Sunday it had helped mobilize one firefighting Canadair plane from Croatia and two from Spain to help Turkey. Planes sent from Ukraine, Russia, Azerbaijan and Iran have also been fighting the blazes. The planes from Spain would arrive on Tuesday while the one from Croatia was expected join the efforts later on Monday, an EU official said.

A fire in Mazikoy, in Mugla, reignited in strong winds on Monday, several hours after fire crews had made gains in containing the blaze, Haberturk broadcaster reported.

On Sunday, residents were forced to evacuate the nearby Cokertme village as flames neared. Some got on boats and others left by cars as the fire got closer and closer — scenes which Ahmet Aras, the mayor of the nearby resort of Bodrum, described as “hell.” Precautions were taken to protect two nearby thermic power plants in the vicinity, though they were not in immediate danger.

An evacuation order was also issued for the town of Turunc, near the seaside resort of Marmaris in Mugla. People boarded small boats carrying suitcases. Others waited anxiously to see if the fire would come down to the shore.

The health minister, Fahrettin Koca, said at least 27 people affected by the fires were still receiving treatment in hospitals while hundreds of others had been released.

While Turkish authorities were investigating whether the fires may have have been the result of arson by outlawed Kurdish militants, experts mostly point to climate change along with accidents caused by people. Turkish President Recep Tayyip Erdogan said one of the fires was started by children.

A heat wave across southern Europe, fed by hot air from North Africa, has led to wildfires across the Mediterranean, including on the Italian island of Sicily and in western Greece, where some residents had to be evacuated by boat to escape the flames.

And Suzan Fraser, The Associated Press